The GOP is waging war on people with disabilities on numerous fronts. 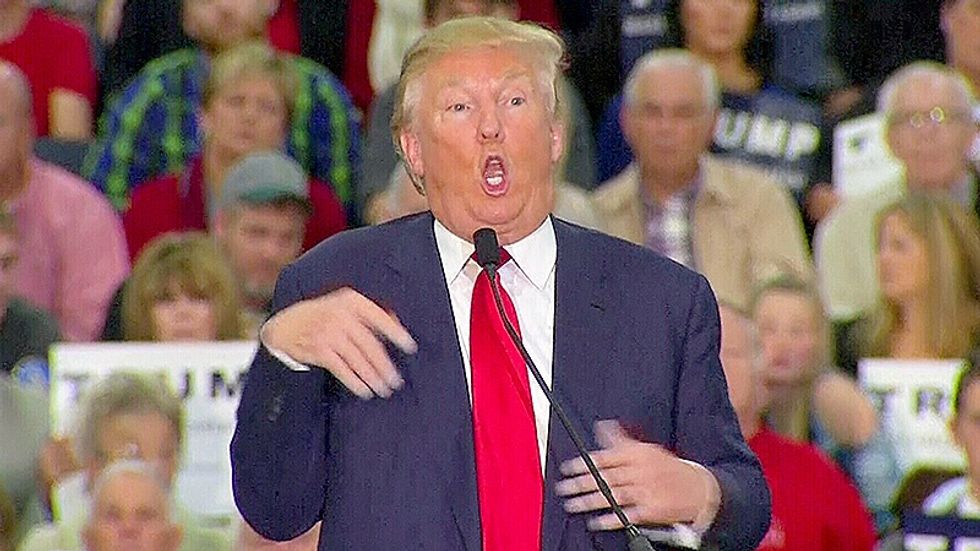 November 2015: Candidate Donald Trump appears to mock Serge Kovaleski, a New York Times reporter who suffers from arthrogryposis, a condition which limits the movement of joints and is particularly noticeable in Kovaleski’s right arm and hand. (Screenshot via Youtube)

In 2017, the GOP moved to erode voting rights, Medicare, Meals on Wheels, access to education, and other protections — including the landmark Americans with Disabilities Act.

When Donald Trump cruelly mocked a disabled reporter on the campaign trail in 2016, disabled people took notice, and were dismayed to realize that they were among the “undesirables” the candidate and his party were targeted for future harm. The first year of the Trump administration has made the threat real, as Trump and the GOP Congress have pursued legislation that will put limits on access to health care, education, opportunities, and voting rights for Americans with disabilities. Even the landmark Americans With Disabilities Act (ADA) is in the crosshairs.

The GOP tax bill will have numerous impacts on people with disabilities in the years to come. Changes to health care funding and the Affordable Care Act will put access to treatments and assistance out of reach for many with disabilities, and create situations where more people become disabled when they can’t afford or access treatment. The tax bill cuts support for programs like Meals on Wheels and in-home nursing care that help people live at home with help, rather than in nursing homes. The elimination of tax credits for charitable giving will also reduce the number of citizens donate to charities that help vulnerable populations.

“Even before the ink was dry on the final bill, lawmakers on Capitol Hill were demanding cuts to all sorts of programs that help support people with disabilities, including Medicaid, Medicare, Social Security, Vocational Rehabilitation services, and many others. This hypocrisy must be called out for what it is and ultimately defeated,” said Curt Decker, executive director of the National Disability Rights Network. “Rather than working in a bipartisan way to address the problems our country and people with disabilities face, they have taken the first step to undercutting important, needed, and critical federal programs.”

In addition, the GOP plans for 2018 include cuts to Social Security, Social Security Disability Insurance (SSDI), food stamps, and other social welfare programs. In order to pay for the massive tax cuts corporations and the wealthy will now enjoy into perpetuity, society’s most vulnerable will bear the burden.

The GOP’s disregard for people with disabilities was made pointedly clear during the several attempts to repeal the Affordable Care Act in 2017. When disabled people literally put their bodies on the line to protest, they were brutally arrested, jailed, and dragged out of their wheelchairs. At a “die-in” staged outside of Sen. Mitch McConnell’s DC office, 43 people with the disability rights group ADAPT were arrested and charged with obstruction.

Advocacy groups fear the next target will be the ADA, the landmark legislation signed into law by President H.W. Bush in 1990. A new bill, HR 620, will weaken ADA protections by allowing businesses to deny entry to people with disabilities. The ADA requires businesses and other places that are open to the public to be wheelchair accessible. Although businesses have had 28 years to become compliant, not all have, and if HR 620 passes, they will no longer have incentive to do so.

“The ADA is under serious attack,” said Marilyn Golden, a lawyer at the Disability Rights Education and Defense Fund. “HR 620 would weaken the Americans with Disabilities Act. It would remove any incentive for voluntary compliance with the ADA requirements for disability access to businesses such as stores, restaurants and hotels.”

As the GOP’s agenda becomes more focused on reducing support for disabled and other vulnerable populations, people with disabilities might be inspired to vote them out — but that is getting more difficult as well. GOP-driven election fraud laws have been criticized for being onerous to the elderly and disabled. In Kansas, 23 ballots cast by disabled people were tossed out because the signature didn’t exactly match the one they originally had on file — created earlier in time, before illness or injury impacted their handwriting. Some of the races were decided by fewer than 23 votes.

"If you're a person with quadriplegia or a senior and don't have the same ability to mark a ballot as you did when you were younger," the ballot would be thrown out, said Rocky Nichols, executive director of the Disability Rights Center of Kansas. "It's really a problem for people with disabilities. We need to get it fixed."