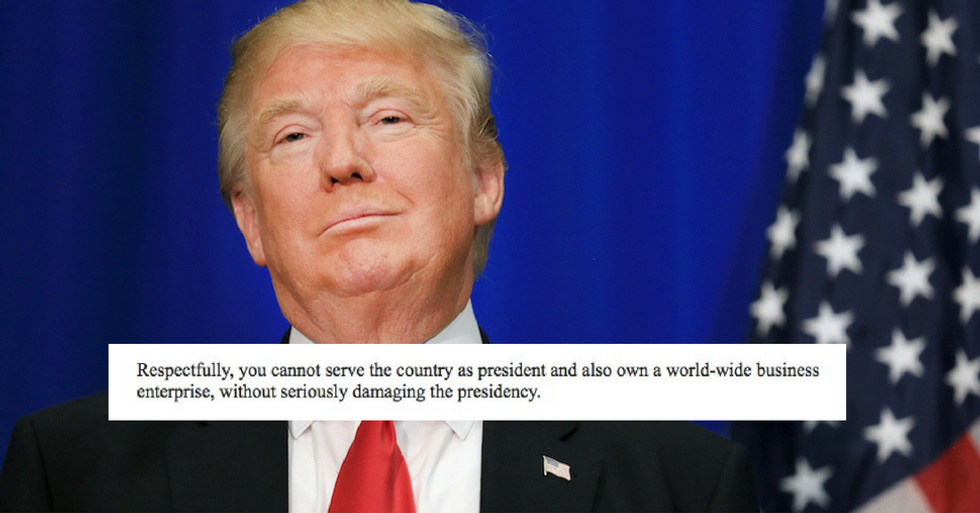 A number of prominent conservatives have signed on to a letter warning that Trump risks "seriously damaging the presidency" if he does not sell his businesses to address his conflicts of interest.

"As long as you continue to maintain ownership of The Trump Organization, no other steps that you take will prevent the serious conflicts of interest, appearance of conflicts, and Emoluments Clause problems that will exist throughout your presidency," the letter reads in part. "In these circumstances, you cannot separate the presidency from your business enterprises."

Elsewhere, the signatories note the influence the president-elect's conflicts of interest could wield over both domestic and foreign policy:

Several moderate Republicans, including former New Jersey Gov. Christine Todd Whitman, former Minnesota Gov. Arne Carlson and former Rep. Mickey Edwards of Oklahoma, who was chairman of the House Republican Policy Committee, signed the letter. But other signatories are conservatives who lean considerably further to the right. These include Peter Schweizer, president of the Government Accountability Institute, and John Pudner, a political consultant with Take Back Our Republic, a group which seeks to, according to its website, reform "the system of escalating campaign contributions by corporations, labor unions and special interests that fuels government spending."

A few good-government organizations also signed the letter, such as People for the American Way and Public Citizen, both of which have dedicated time and resources to ensure government transparency. Liberal Democrats such as Zephyr Teachout of Fordham University School of Law and Harvard Law School's Laurence H. Tribe have also signed on.

In an interview earlier this week, Kellyanne Conway––who Trump recently appointed as "counselor to the president"––indicated that the president-elect has planned a news conference for January 11 to address conflicts of interest. She acknowledged, however, that the date might change, depending on the advice of Trump's legal team. In the past, Trump has said he would turn over control of his businesses to his children, but the signatories warn that the problems he faces "cannot be solved by turning management of The Trump Organization over to your family members." Moreover, these "same conflicts and appearance of conflicts problems would exist in these circumstances," they wrote. "Domestic and foreign interests would see providing financial benefits to your family as a means to curry favor and obtain influence with you."

While the signatories acknowledge that the president-elect has taken some steps, as reported by the New York Times, to address these conflicts, including backing out of real estate deals in Brazil, Argentina, and Azerbaijan, they stress that only a complete divestment of his businesses into a blind trust (previous presidents have, for the most part, adhered to conflict of interest laws that govern the executive branch) which they recommend be managed "by an independent trustee or the equivalent."

You can read the complete letter HERE.