We Now Know All the Trump Officials Who Refused to Follow Through on Donald Trump's Illegal Orders, and Yeah, It's a Lot 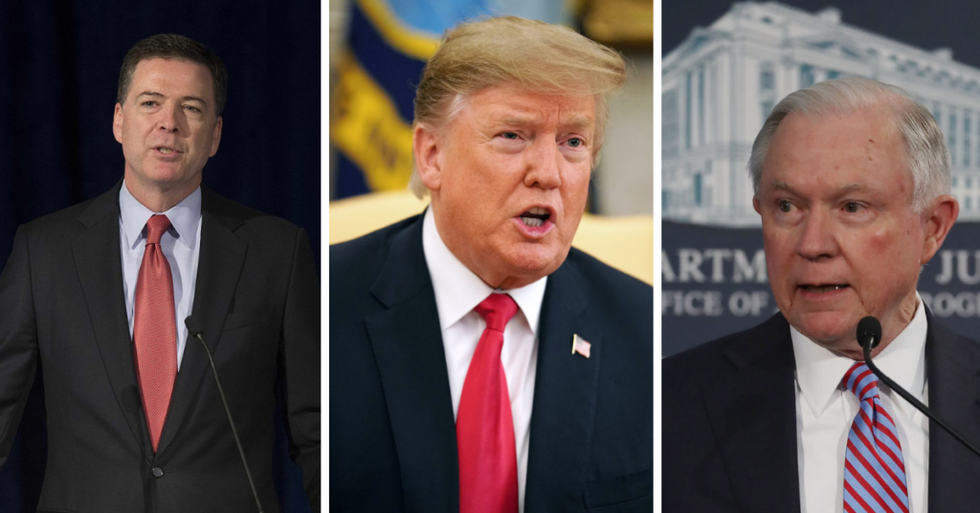 Much has been made of the instances Special Counsel Robert Mueller examined to determine whether President Donald Trump obstructed justice now that the redacted version of his comprehensive report has been released. That the president made many attempts to shut down the investigation is clear. That he failed, in large part because many in his orbit refused to comply with his orders, is even clearer.

The report names 10 individuals who ignored Trump's orders, some of whom he loathed more than others.

"When the President met with Comey the day after Flynn's termination — shortly after being told by [New Jersey Gov. Chris] Christie that firing Flynn would not end the Russia investigation — the President cleared the room, even excluding the Attorney General, so that he could again speak to Comey alone. The President's decision to meet one-on-one with Comey contravened the advice of the White House Counsel that the President should not communicate directly with the Department of Justice to avoid any appearance of interfering in law enforcement activities. And the President later denied that he cleared the room and asked Comey to "let Flynn go" — a denial that would have been unnecessary if he believed his request was a proper exercise of prosecutorial discretion."

While considering whether he should fire Comey, Trump reached out to Deputy Attorney General Rod Rosenstein and then-Attorney General Jeff Sessions for their opinions. Rosenstein had reservations about Comey's handling of Hillary Clinton's use of a private email server during her time as Secretary of State. Trump asked Rosenstein "to include in his recommendation the fact that Comey had refused to confirm that the President was not personally under investigation."

According to notes taken by a senior DOJ official of Rosenstein's description of his meeting with the President, the President said, 'Put the Russia stuff in the memo.' Rosenstein responded that the Russia investigation was not the basis of his recommendation, so he did not think Russia should be mentioned. The President told Rosenstein he would appreciate it if Rosenstein put it in his letter anyway. When Rosenstein left the meeting, he knew that Comey would be terminated, and he told DOJ colleagues that his own reasons for replacing Comey were 'not [the President's] reasons.'

Once the news of Comey's firing broke, Trump attempted to walk back his call and directed the Department of Justice "to put out a statement saying that it was Rosenstein's idea to fire Comey."

Rosenstein did not comply, according to the report:

Rosenstein told other DOJ officials that he would not participate in putting out a 'false story.' The President then called Rosenstein directly and said he was watching Fox News, that the coverage had been great, and that he wanted Rosenstein to do a press conference. Rosenstein responded that this was not a good idea because if the press asked him, he would tell the truth that Comey's firing was not his idea. Sessions also informed the White House Counsel's Office that evening that Rosenstein was upset that his memorandum was being portrayed as the reason for Comey's termination.

After Comey's termination, Trump spoke to Deputy FBI Director Andrew McCabe and "asked McCabe whether many people in the FBI disliked Comey and whether McCabe was part of the 'resistance' that had disagreed with Comey's decisions in the Clinton investigation."

McCabe, the report notes, "told the President that he knew Comey had told the President he was not under investigation, that most people in the FBI felt positively about Comey, and that McCabe worked 'very closely' with Comey and was part of all the decisions that had been made in the Clinton investigation."

Trump met with McCabe again and "without prompting, told McCabe that people in the FBI loved the President, estimated that at least 80% of the FBI had voted for him, and asked McCabe who he had voted for in the 2016 presidential election."

Former Attorney General Jeff Sessions recused himself from all matters related to the Russia investigation in March 2017 after it was revealed that Sessions used funds from his Senate re-election campaign to cover travel expenses for the 2016 Republican National Convention in Cleveland, where he met with Sergei Kislyak, the former Russian ambassador to the United States. Trump made numerous attempts to get Sessions to walk back his recusal:

"In early summer 2017, the President called Sessions at home and again asked him to reverse his recusal from the Russia investigation. Sessions did not reverse his recusal. In October 2017, the President met privately with Sessions in the Oval Office and asked him to "take [a] look" at investigating Clinton. In December 2017, shortly after Flynn pleaded guilty pursuant to a cooperation agreement, the President met with Sessions in the Oval Office and suggested, according to notes taken by a senior advisor, that if Sessions unrecused and took back supervision of the Russia investigation, he would be a "hero." The President told Sessions, "I'm not going to do anything or direct you to do anything. I just want to be treated fairly." In response, Sessions volunteered that he had never seen anything "improper" on the campaign and told the President there was a "whole new leadership team" in place. He did not unrecuse."

Trump continued to scheme about firing Sessions for what he considered the ultimate act of betrayal. According to the report, in July 2017, Trump "told Priebus that he had to get Sessions to resign immediately" because "the country had lost confidence in Sessions and the negative publicity was not tolerable."

But Priebus pushed back: "Priebus replied that if they fired Sessions, they would never get a new Attorney General confirmed and that the Department of Justice and Congress would turn their backs on the President."

Priebus and former White House counsel Don McGahn discussed resigning to avoid firing Sessions. Priebus than lied to the president about his intention to carry out the directive:

Another attempt to get oust Sessions failed after Trump demanded adviser Corey Lewandowski to tell then-Attorney General Jeff Sessions to limit the scope of the Russia investigation “to prospective election-interference only.” Neither Lewandowski nor Rick Dearborn, Trump’s former deputy chief of staff, followed through.

Trump "asked Staff Secretary Rob Porter what he thought of Associate Attorney General Rachel Brand. Porter recalled that the president asked him if Brand was good, tough and ‘on the team,’" according to the report. But Porter did not comply, even after Trump asked him several times whether he'd spoken to Brand about the position:

Later, the President asked Porter a few times in passing whether he had spoken to Brand, but Porter did not reach out to her because he was uncomfortable with the task. In asking him to reach out to Brand, Porter understood the President to want to find someone to end the Russia investigation or fire the Special Counsel, although the President never said so explicitly. Porter did not contact Brand because he was sensitive to the implications of that action and did not want to be involved in a chain of events associated with an effort to end the investigation or fire the Special Counsel.

When Trump heard that he was being investigated for possible obstruction of justice, he took matters into his own hands and reached out to his former White House counsel.

"On June 17, 2017, the President called McGahn at home and directed him to call the Acting Attorney General and say that the Special Counsel had conflicts of interest and must be removed. McGahn did not carry out the direction, however, deciding that he would resign rather than trigger what he regarded as a potential Saturday Night Massacre."

When reports surfaced that Trump intended to terminate the special counsel's appointment, Trump tried “to tell McGahn to dispute the story and create a record stating he had not been ordered to have the Special Counsel removed.” McGahn did not comply.

Another attempt to get McGahn to deny the reports also backfired and McGahn "perceived the President to be testing his mettle.”

McFarland, the deputy national security adviser, received a directive from Trump via then-Chief of Staff Reince Priebus to have McFarland "draft an internal email that would confirm that the President did not direct Flynn to call the Russian Ambassador about sanctions. Priebus said he told the President he would only direct McFarland to write such a letter if she were comfortable with it."

But McFarland balked, as the report notes: