Someone Projected Trump's Approval Rating in the UK Versus Obama's Onto the Tower of London, and We Really Hope He Saw It 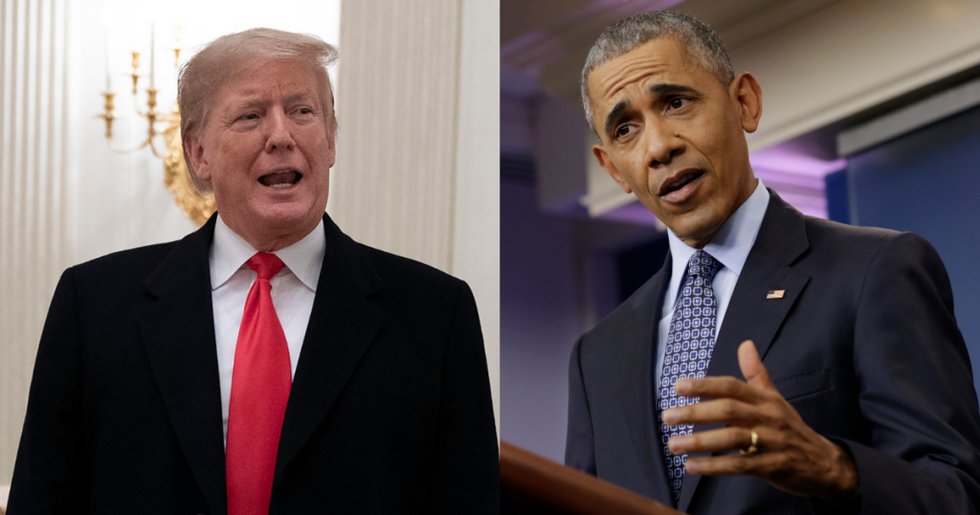 President Donald Trump arrived in the United Kingdom on Monday and the Brits are welcoming him with some masterful shade.

The activist group Led By Donkeys has unleashed projections across at least two London landmarks. On the Tower of London, the group is projecting Donald Trump's UK approval ratings side-by-side with former President Barack Obama's.

Take a look below:

Currently being projected on the Tower of London during President Trump’s visit to the UK. Photo: @ByDonkeys https://t.co/UchJZwjTjp
— Travis Akers (@Travis Akers) 1559572269.0

As the projection points out, polls from YouGov give Donald Trump an abysmal approval rating in the United Kingdom. Adding insult to injury, his rating is further dwarfed by his predecessor, Obama.

The London Tower projection isn't the only Led By Donkeys creation trolling the president. The group is also projecting a giant USS John McCain cap onto Madam Tussaud's.

In addition to the image of President Obama’s and Trump’s respective UK approval ratings being projected on the Tow… https://t.co/yJajUbQvpu
— Travis Akers (@Travis Akers) 1559573581.0

This comes right off the heels of the Trump administration reportedly ordering the ship to be kept out of sight during Trump's recent visit to Japan. While the president infamously despises the late Republican senator from Arizona, many thought the order reached a new level of pettiness in Trump's feud with a dead man.

People are applauding the projections.

We're not sure if Trump will see Led By Donkeys' handiwork, but we certainly hope word gets back to him.