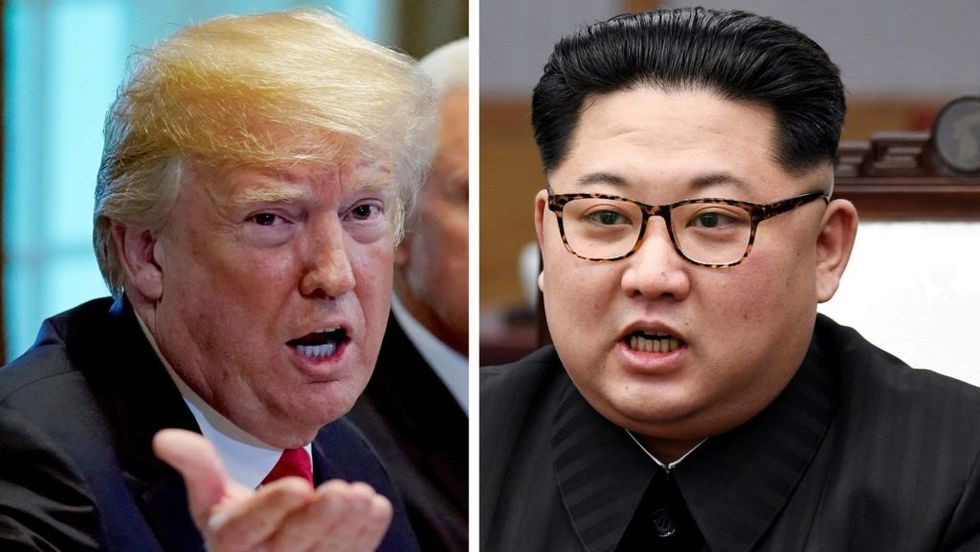 President Donald Trump has not yet met North Korean leader Kim Jong Un, but he's already indicated that he will cut their historic summit short.

The first-ever meeting between a U.S. president and a North Korean leader was scheduled for 9 a.m. but the White House unexpectedly announced Trump would depart Singapore by Tuesday evening, significantly shortening his time with Kim. Earlier, the president had forecasted a "nice outcome."

The White House said Trump was leaving early because negotiations had moved "more quickly than expected." No other details were provided.

The sudden announcement appears to dampen the president's hopes that the two leaders would reach an agreement on North Korea's nuclear program, which he had long pledged to disarm entirely. The probability of forging an end to the Korean War also slid considerably.

"We are hopeful this summit will have set the conditions for future successful talks," said Mike Pompeo, the Secretary of State.

Pompeo did tell the press that the United States was prepared to take action to provide North Korea with "sufficient certainty" that denuclearization "is not something that ends badly for them." (He did not answer when asked whether the U.S. planned to withdraw its troops from the Korean Penninsula.

"I can only say this," Pompeo said. "We are prepared to take what will be security assurances that are different, unique, than America's been willing to provide previously."

The president plans to fly to Guam and Hawaii on his way back to Washington.

The future of the summit seemed imperiled in recent weeks, when on May 25, North Korea, in a statement released by the state-run Korean Central News Agency and attributed to vice foreign minister Kim Kye Gwan expressed  “great regret” for Trump’s “sudden and unilateral” decision to cancel the summit, which he had the day prior.

It could be that he lacked the will for the summit or he might not have felt confident,” he adds.

Gwan said North Korea had “inwardly highly appreciated” Trump’s “bold” decision to meet with Kim Jong Un, but said Trump’s decision to cancel the summit is “not consistent with the desire of humankind for peace and stability in the world.”

Gwan also addressed a recent statement from North Korea’s vice foreign minister Choe Son Hui in which she called Vice President Mike Pence “a political dummy” for comparing North Korea to Libya, saying that the vice foreign minister’s comments were “just a reaction to the unbridled remarks made by the U.S. side which has long pressed the DPRK unilaterally to scrap nuclear program ahead of the DPRK-U.S. summit.”

“Very good news to receive the warm and productive statement from North Korea,” he wrote. “We will soon see where it will lead, hopefully to long and enduring prosperity and peace.”

Very good news to receive the warm and productive statement from North Korea. We will soon see where it will lead,… https://t.co/BoKsJzcaTV
— Donald J. Trump (@Donald J. Trump) 1527250447.0

The president’s claim that the North Korean response was “warm and productive” ignores his role in canceling the summit. On May 24, the president announced the cancellation in a letter addressed to Kim Jong Un which boasted of the United States’ nuclear capabilities.

“You talk about your nuclear capabilities, but ours are so massive and powerful that I pray to God they will never have to be used,” the president wrote after condemning the North Korean leader for his “tremendous anger and “open hostility.”

The decision to leave early caps off a tumultuous last few days for the president, who became the object of consternation after he called for Russia to be readmitted into the G-7 summit, a meeting of seven countries with the largest advanced economies in the world.

“Russia should be in this meeting,” Trump told reporters before leaving the White House for Canada, where the summit is being held. “Why are we having a meeting without Russia being in the meeting?”

“Whether you like it or not, and it may not be politically correct, but we have a world to run,” Trump added. “They should let Russia come back in because we should have Russia at the negotiating table.”

Russia was removed from the summit in 2014 after it invaded Crimea over its support for pro-Russia separatists in Ukraine. The president claimed that former President Barack Obama was responsible for Crimea's annexation.

"You'll have to ask Obama, because he was the one that let Crimea get away" he said when asked about the annexation. "He allowed Russia to take Crimea. I may have had a much different attitude."