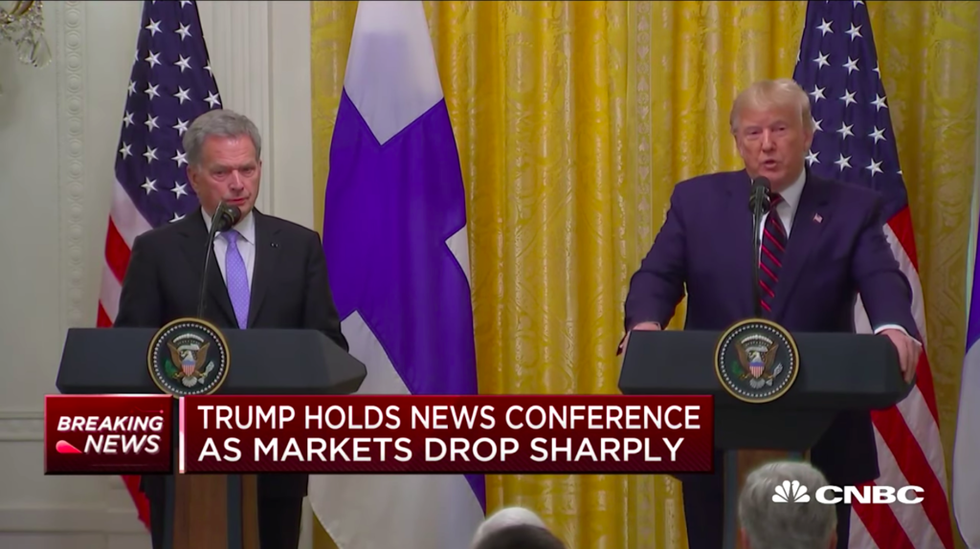 Ever since Speaker of the House Nancy Pelosi announced the House of Representatives would proceed with an impeachment inquiry into President Donald Trump, the POTUS has used every opportunity to plead his case with the public.

Including interrupting and hijacking the questions for Finnish President Sauli Niinistö during a joint news conference.

Earlier in the question and answer session with the press, President Niinistö can be heard laughing at President Trump's avoidance of a question from Reuters Jeff Mason, telling him to not be rude and ask the Finnish President a question.

Trump berates @jeffmason1 after Mason presses him to actually answer the question he asked (he never does). The Fin… https://t.co/EBGr2R3Kwb
— Aaron Rupar (@Aaron Rupar) 1570043323.0

However when Mason does ask President Niinistö a question...

Trump seems to be losing it. Here he is highjacking a question intended for the Finnish president and ranting about… https://t.co/oihIivh8w5
— Aaron Rupar (@Aaron Rupar) 1570043400.0

...Trump interrupts and decides to answer.

Although Finnish President Niinistö tells Trump that Mason's question was intended for him.

Their meeting earlier in the day did not fare much better. As detailed before, President Trump has issues with personal space and putting his hands on other world leaders.

Niinistö appears to dislike this particular habit of Trump's.

The President of Finland has a solidly Scandinavian response to physical contact from Trump. https://t.co/vZca7v7zgu
— southpaw (@southpaw) 1570036288.0

At the news conference, President Niinistö got his chance to answer Mason's question just before President Trump launched into another rant that culminated in him abruptly ending the joint press conference, leaving the Finnish President behind. Niinistö pauses after leaving the dais, then eventually follows Trump out.

The entire episode was not the POTUS' finest hour in foreign relations and international diplomacy.

@QuantumSpooky @atrupar My favorite part of the circus today. Trump refusing to answer his question and then shutti… https://t.co/tPK4oMmHea
— Logical Liberal (@Logical Liberal) 1570048136.0

@atrupar @shirltom2 What in the hell was that? The Finnish President looked at Trump and said "I think the question… https://t.co/Bsegw4yKL3
— Nicholas Patrick (@Nicholas Patrick) 1570047234.0

@atrupar He is three seconds away from ripping all his clothes off and screaming "My mommy didn't love me"
— kathleen (@kathleen) 1570043462.0

With each passing day, the President seems more and more desperate. Who knows what tomorrow will bring.

President's can inspire people. This shirt is available here.