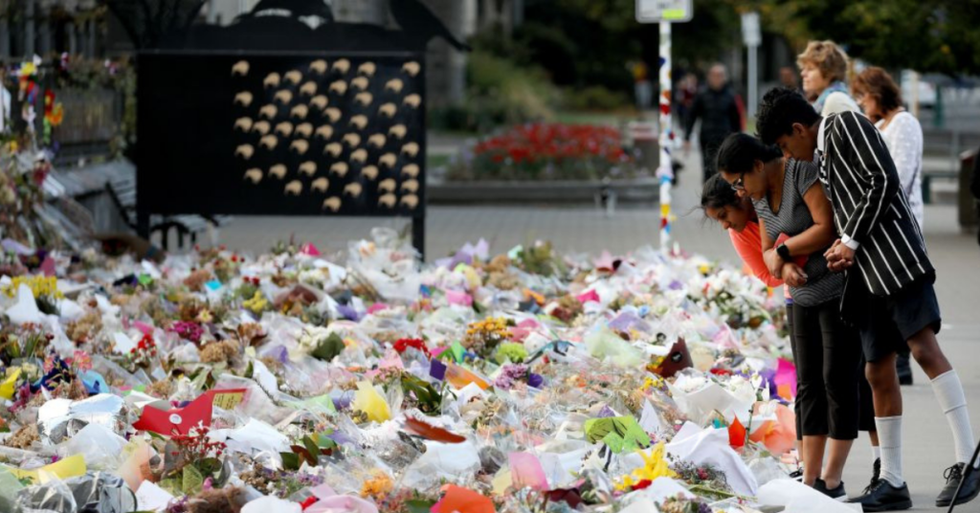 An unidentified man wearing a Donald Trump T-shirt "yelled abuse at members of the Muslim community" gathered at Masjid Al Noor Mosque, one of the mosques targeted in the Christchurch terror attack, according to stuff.co.nz. More than 40 of the 50 victims murdered by a white supremacist during last month's terror attack died there.

"He was there for about 15 minutes, he also kicked and tried to damage some of the memorial items along Deans Ave in front of the Masjid,” said one person who witnessed the incident. Others who were at the scene said the man shouted obscenities, accused all Muslims of being terrorists, and demanded that they "leave" New Zealand.

17-year-old Yasmeenah Safiya told Stuff that she received a call from one of her friends who was at the scene.

“She was like, ‘a guy just came in wearing a Trump shirt and he was shouting abuse at all of us," she said. “I just want the people of New Zealand to know that racism is still here, and it frustrates me when people say that racism is not us because it's been happening for years.”

“Police are aware of a man who acted in a disorderly manner on Deans Avenue today, and are actively seeking him. He could face a disorderly behavior charge," a police spokesperson told The Daily Beast.

For many, the incident served as another example of white supremacists emboldened by the U.S. president's rhetoric.

@justinjm1 @justinhendrix sickening!!!... and further evidence of the ignorant people who are hateful and intoleran… https://t.co/1F0AfPqJzP
— little wing (@little wing) 1554896824.0

I am sickened to read this article.When will we truly find love? And why did he police who were present not interve… https://t.co/ZTGVvYBsPU
— Tony Keen (@Tony Keen) 1554890944.0

That incident was not an isolated one. Safiya said she was verbally harassed by a "sleazy man" who told her she "should have got shot as well" as she headed to her car after running late for Friday prayers.

"I wasn't even thinking about how I felt at that moment. I was more worried about all of my loved ones inside the masjid," she said, noting that she'd felt distressed by what she'd heard.

When asked shortly after the attacks if he sees white nationalism “as a rising threat around the world,” Trump responded, “I don’t really."

Trump’s response is a far cry from that of New Zealand Prime Minister Jacinda Ardern, who named the threat for what it was in her remarks to legislators.

"He sought many things from his act of terror but one was notoriety, that is why you will never hear me mention his name… He is a terrorist. He is a criminal. He is an extremist. But he will, when I speak, be nameless," she said in the days following the attacks. "And to others, I implore you: Speak the names of those who were lost rather than the name of the man who took them. He may have sought notoriety but we, in New Zealand, will give nothing—not even his name.”

The Prime Minister of New Zealand continues, "And to others, I implore you: Speak the names of those who were lost… https://t.co/5ofqu8IVzm
— Michael Skolnik (@Michael Skolnik) 1553010346.0

In a tweet last month, Trump claimed that the “Fake News Media is working overtime” to blame him for the Christchurch attacks.

In a 74-page document, the white supremacist who perpetrated the attacks said he supports Trump “as a symbol of renewed white identity and common purpose.”