Donald Trump Has a New Solution for Players Who Kneel During the Anthem, and It Sure Sounds Like What He Wants to Do to MS-13 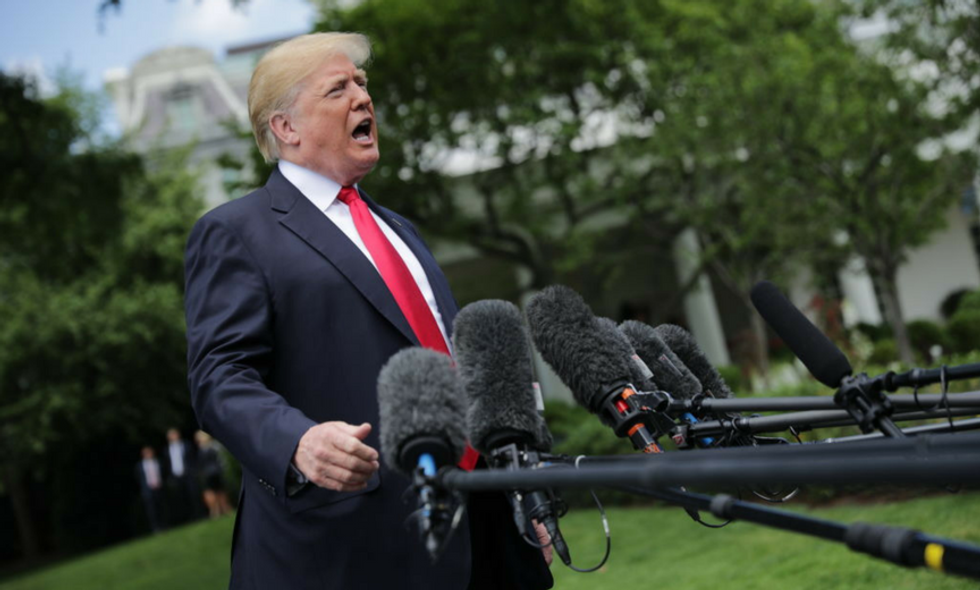 WASHINGTON, DC - MAY 23: U.S. President Donald Trump speaks to the media as he walks across the South Lawn while departing the White House May 23, 2018 in Washington, DC. Trump is traveling to New York where he will tour the Morrelly Homeland Security Center and then attend a roundtable discussion and dinner with supporters before returning to Washington. (Photo by Chip Somodevilla/Getty Images)

President Donald Trump praised the NFL after its owners unanimously approved a new national anthem policy that would require players to stand if they are on the field during the performance. He also suggested that perhaps players who refuse to stand for the anthem “shouldn’t be in the country.”

"You have to stand proudly for the National Anthem and the NFL owners did the right thing if that's what they've done," Trump said in an interview with Fox News that aired earlier this morning.

Asked if his criticisms of players who kneel during the national anthem prompted the NFL to change its rules, the president credited "the people" rather than himself.

The president also accused Democrats of defending violent gang members, launching into yet another appeal against immigration laws he believes are endangering the nation.

"The Democrats are sticking up for MS-13. You heard [House Minority Leader] Nancy Pelosi the other day, like, trying to find all sorts of reasons why they should be able to stay. These are stone cold killers -- vicious killers," Trump said.

Washington Post reporter Aaron Blake skewered the president's comments, bringing up last week's report that the president analogized illegal immigrants whom he claimed are part of gangs to animals during a meeting with California officials who oppose the state’s position on sanctuary cities.

More than one social media user brought up comments the president made about white supremacists last year.

In August 2017, the president sparked outrage after he spread the blame for the violence which had erupted the previous weekend at the “Unite the Right” rally in Charlottesville, Virginia.

Trump’s first official statement on the demonstration––which resulted in three deaths and injuries of numerous others––came three days after it first began. He spoke after meeting with newly installed FBI Director Christopher Wray and Attorney General Jeff Sessions, and acknowledged that the Justice Department had opened a civil rights investigation into the death of Heather Heyer, the woman who was killed after she was struck by a Dodge Challenger driven by James Alex Fields, who had traveled to the city from Ohio to protest at the rally with fellow white nationalists.

The president's latest interview spotlighted his authoritarian leanings and his use of "the language of a dictator," wrote advocate Amy Siskind.

The NFL's rule change, which was announced yesterday, states that if players do not stand, their team will face fines.

NFL Commissioner Roger Goodell said in a statement that the policy was approved “in concert with the NFL’s ongoing commitment to local communities and our country.”

“We believe today’s decision will keep our focus on the game and the extraordinary athletes who play it––and on our fans who enjoy it,” his statement continues.

NFL Commissioner Roger Goodell said during a news conference that teams whose players and personnel do not stand an… https://t.co/6TliONoPVZ
— CNN (@CNN) 1527100916.0

The complete statement is below.

“The NFL chose to not consult the union in the development of this new ‘policy.’ NFl players have shown their patriotism through their social activism, their community service, in support of our military and law enforcement and yes, through their protests to raise awareness about the issues they care about,” the statement read.

Adding that they would “review the new ‘policy,'” the NFLPA said the vote by the owners “contradicts the statements made to our player leadership by Commissioner Roger Goodell and the Chairman of the NFL’s Management Council John Mara about the principles, values and patriotism of our league.”

Previous NFL policy required players to be on the field for the anthem but did not mandate them to stand. In 2009, NFL players began standing on the field for the national anthem before the start of primetime games. Prior to 2009, “players would stay in their locker rooms except during the Super Bowl and after 9/11,” according to Axios.

But NFL players standing during the national anthem only became a hot-button issue after former San Francisco 49ers quarterback Colin Kaepernick chose to kneel during the 2016 season, sparking a national conversation on the perils of systemic racism and police brutality.

When asked why he refused to stand, Kaepernick replied: “I am not going to stand up to show pride in a flag for a country that oppresses black people and people of color. To me, this is bigger than football, and it would be selfish on my part to look the other way. There are bodies in the street and people getting paid leave and getting away with murder.”

Kaepernick later filed a grievance with the NFL for collusion to keep him out of the league. The filing alleged the NFL and its owners “have colluded to deprive Mr. Kaepernick of employment rights in retaliation for Mr. Kaepernick’s leadership and advocacy for equality and social justice and his bringing awareness to peculiar institutions still undermining racial equality in the United States.”

Internal team documents unearthed this week in the collusion case against the league revealed that NFL teams view Kaepernick as a good enough player to be a starting quarterback in the league. Despite this, Kaepernick has not started a game since the 2016 season with the San Francisco 49ers.

The NFL’s policy change has come under attack for appearing to cave to President Donald Trump’s relentless criticism of players––particularly Kaepernick––who lean during the national anthem.

“I watched Colin Kaepernick, and I thought it was terrible, and then it got bigger and bigger and started mushrooming, and frankly the NFL should have suspended him for one game, and he would have never done it again,” Trump told Fox News’s Sean Hannity in an interview conducted before an audience at the Harrisburg Air National Guard Base last year, shortly before Kaepernick filed his grievance with the NFL.

Last spring, the president took credit for Kaepernick’s failure to be signed by an NFL team since breaking from the 49ers.

“There was an article today…that NFL owners don’t want to pick him up because they don’t want to get a nasty tweet from Donald Trump,” the president told a crowd at a rally in Louisville, Kentucky at the time. “You believe that? I just saw that. I said, ‘If I remember that one, I’m gonna report it to the people of Kentucky because they like it when people actually stand for the American flag.’”