In Fundraising Speech, Donald Trump Just Admitted He Lied to a World Leader and Is Just Making It Up as He Goes Along

He's not even trying to hide it anymore. 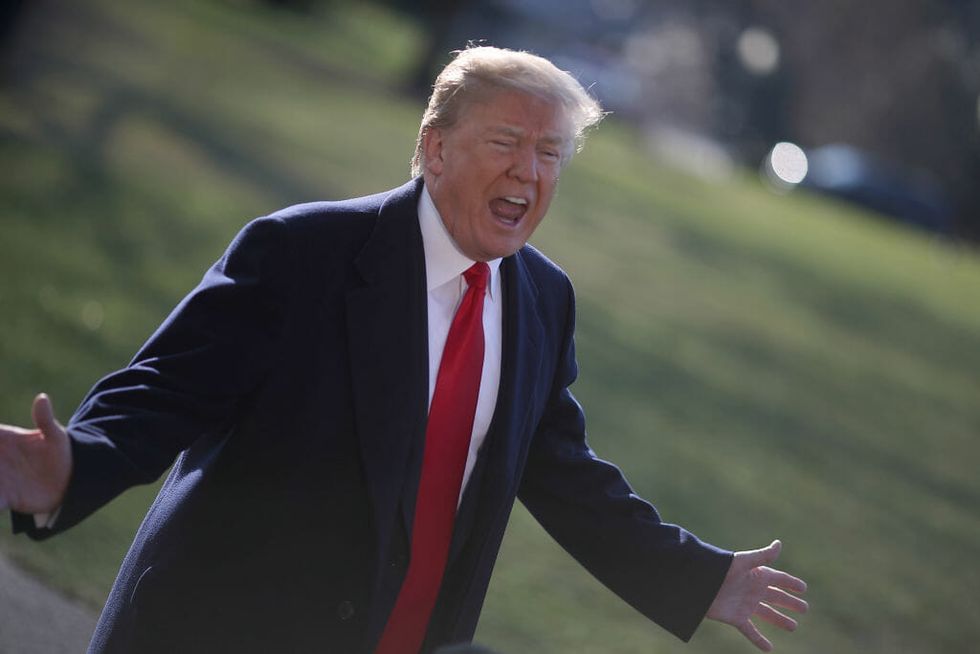 WASHINGTON, DC - MARCH 13: U.S. President Donald Trump answers questions from the media after the firing of Secretary of State Rex Tillerson before departing from the White House on March 13, 2018 in Washington, DC. (Mark Wilson/Getty Images)

President Donald Trump boasted in a fundraising speech yesterday that he lied to Canadian Prime Minister Justin Trudeau when he said that the United States runs a trade deficit with Canada without knowing whether that was actually true.

"Trudeau came to see me. He's a good guy, Justin. He said, 'No, no, we have no trade deficit with you, we have none. Donald, please,'" Trump said during a speech to donors in Missouri, according to audio obtained by The Washington Post. "Nice guy, good-looking guy, comes in — 'Donald, we have no trade deficit.' He's very proud because everybody else, you know, we're getting killed."

‘Well, sir, you’re actually right. We have no deficit, but that doesn’t include energy and timber. … And when you do, we lose $17 billion a year.’ It’s incredible.”

Figures provided by the Office of the United States Trade Representative reveal that the United States ran a $2.77 billion surplus with Canada for 2017. That figure includes oil and timber. It's still unclear what Trump was referring to when he cited the $17 billion figure.

The White House, in response, said Trump was merely entertaining his audience.

Happy Canada Day to all of the great people of Canada and to your Prime Minister and my new found friend @JustinTrudeau. #Canada150
— Donald J. Trump (@Donald J. Trump) 1498913063.0

This isn't to say that Trudeau hasn't criticized the president and his policy proposals forever.

Most recently, Trudeau has been firmly opposed to the president's proposed tariffs on steel and aluminum imports. Canada managed to secure an exemption after impassioned lobbying from Trudeau's government. Trudeau is currently under pressure to secure a permanent exemption from Trump’s levies. Sealing a NAFTA deal is also on his agenda.

"The president has said as long as there’s a Nafta there won’t be any tariffs. We have a Nafta now, we will have a Nafta once we improve it. That sounds to me like we’re pretty good on not getting tariffs,” Trudeau said yesterday during an interview with Bloomberg Television's Michael McKee as he toured a steel mill in Regina, Saskatchewan. “I’m very optimistic we’re going to be able to get to a win-win-win," he added.

According to a senior Canadian government official who spoke about the lobbying push on condition of anonymity, it was Defense Secretary James Mattis who convinced Trump to exclude Canada from the tariffs after speaking with Harjit Sajjan, his Canadian counterpart.

Trudeau says that Trump at last year’s Group of Seven summit that Canada would be excluded from the proposed tariffs.

“You can’t say that Canada is a national security risk to the United States when we are so partnered on so many different issues,” Trudeau said. "There was a lot of sort of reflection and back and forth, but he ended up following through exactly as he said.”

Earlier Wednesday, Larry Kudlow, the incoming White House economic adviser said that Trudeau “has been on the phone with the president” making concessions on Nafta negotiations “hand over fist.” Trudeau shot down that claim, saying that he will not negotiate in public. “And I’m not flinching on that,” he said.

Trump defended his claim earlier this morning and refused to admit that he is, in fact, wrong about the Canadian trade deficit (or lack thereof).

"We do have a Trade Deficit with Canada, as we do with almost all countries (some of them massive). P.M. Justin Trudeau of Canada, a very good guy, doesn’t like saying that Canada has a Surplus vs. the U.S.(negotiating), but they do...they almost all do...and that’s how I know!" Trump said, implying that he is omnipotent.

Trump's lie prompted strong reactions from many of his critics even before he posted his Twitter message.

DC area man who constantly tweets unhinged rants about “FAKE NEWS” boasts about how he just made up a bunch of stuf… https://t.co/blY4SWodTE
— Brian Klaas (@Brian Klaas) 1521095262.0

Good morning! The president just admitted that he attended a negotiation with the leader of our closest ally, was c… https://t.co/gixr8rt9qP
— Radley Balko (@Radley Balko) 1521112606.0

Trump made his comments during a speech to donors in Missouri in a bid to raise money for Republican Senate candidate Josh Hawley, who's challenging Missouri Democratic Senator Claire McCaskill. He called McCaskill “bad for Missouri and bad for the country.” He barely spoke about Hawley, however. Instead, he spoke about himself––and bragged about his election win.

The president also used his speech to launch attacks against allies he believes are taking advantage of the U.S. He threatened, for example, to pull U.S. troops stationed in South Korea if he didn’t get what he wanted on trade with Seoul. He claimed that South Korea had grown very rich, but had never negotiated better trade deals with the U.S.

“We have a very big trade deficit with them, and we protect them,” Trump said. “We lose money on trade, and we lose money on the military. We have right now 32,000 soldiers on the border between North and South Korea. Let’s see what happens. Our allies care about themselves. They don't care about us."

“They couldn’t have met” with Kim, he said, referring to former presidents Barack Obama and George W. Bush. “Nobody would have done what I did.”

"It’s called appeasement: Please don’t do anything,” he said of other presidents.

“They say, ‘Maybe he’s not the one to negotiate,’ ” he said, mocking the voice of a news anchor. “He’s got very little knowledge of the Korean Peninsula. Maybe he’s not the one. ... Maybe we should send in the people that have been playing games and didn’t know what the hell they’ve been doing for 25 years.”

On the media's reaction to his meeting with Kim, he said: “They were afraid of being blown up. Then all of a sudden, they say, let’s not meet."

"It’s the bowling ball test. They take a bowling ball from 20 feet up in the air and drop it on the hood of the car,” Trump said of Japan. “If the hood dents, the car doesn’t qualify. It’s horrible."

On this particular statement, The Washington Post notes: "It was unclear what he was talking about."