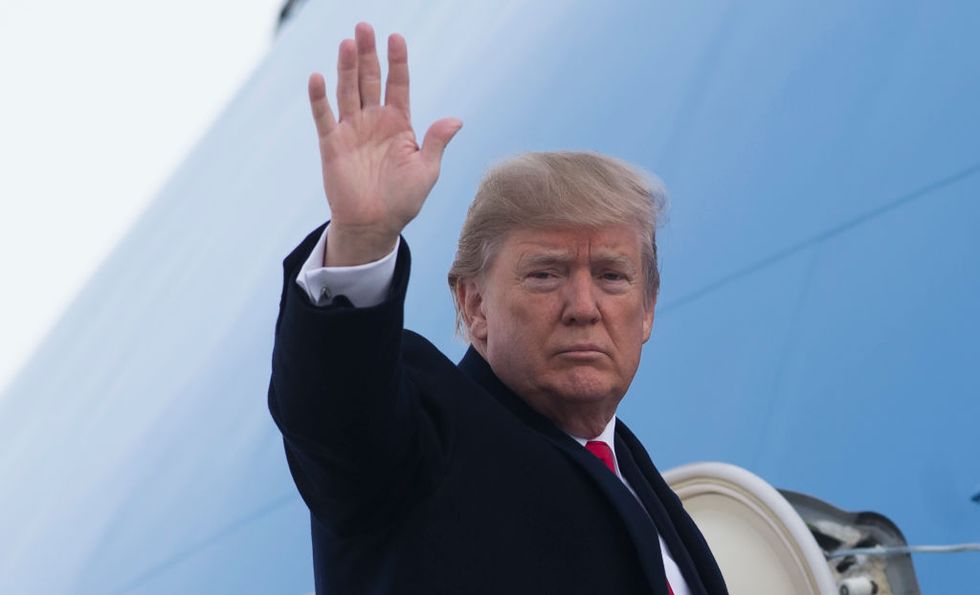 US President Donald Trump waves from Air Force One prior to departure from Andrews Air Force Base in Maryland, December 4, 2017. (Photo credit SAUL LOEB/AFP/Getty Images)

President Donald Trump's outside lawyer, John Dowd, is preparing a new legal defense theory in regard to the Russian investigation: A president cannot be found guilty of obstruction of justice because the Constitution says so. Dowd cites Article II:

"[The] President cannot obstruct justice because he is the chief law enforcement officer under [the Constitution's Article II] and has every right to express his view of any case," Dowd told Axios.

But obstruction is exactly what everyone thinks Trump has admitted to with a recent tweet over the weekend, published later on Saturday morning than his usual early morning tweets. It also reads with more coherence, and command of grammar, than what we have come to expect with the president. That is because Trump didn't write the tweet - Dowd says he did.

The tweet in question suggests Trump knew Flynn had lied to the FBI when he was fired, raising new questions about the later firing of FBI Director James Comey: "I had to fire General Flynn because he lied to the Vice President and the FBI. He has pled guilty to those lies. It is a shame because his actions during the transition were lawful. There was nothing to hide!"

But according to Dowd, it doesn't matter who wrote the tweet because his new legal defense gives the president carte blanche in the sense that none of his actions can possibly obstruct justice if the president himself is the top form of justice in the country. Furthermore, Dowd says the tweet is the furthest thing from an admission of guilt.

"The tweet did not admit obstruction. That is an ignorant and arrogant assertion,” Dowd said.

Dowd's remarks echo back to former President Richard Nixon's defense of his actions during and after the Watergate scandal, which led him to resign in August 1974 before he could be impeached. In his interviews with British journalist David Frost a few years later, he famously said, “When the president does it, that means it is not illegal.”

It is important to note that the Articles of Impeachment against Nixon began by saying the former president "obstructed, and impeded the administration of justice."

The significance of Dowd's remarks at this time is that they strongly indicate President Donald Trump's legal team is laying the foundation to say that he cannot be charged with any crimes pursued in the Russian investigation, including collusion and obstruction. Essentially, Dowd is trying to say the president has legal immunity from his actions. But Dowd has not yet said what section of Article II he is using as the basis for his argument.

The Democrats will, of course, fight Dowd's theory. Bob Bauer, an NYU law professor and former White House counsel to President Obama, told Axios: "It is certainly possible for a president to obstruct justice. The case for immunity has its adherents, but they based their position largely on the consideration that a president subject to prosecution would be unable to perform the duties of the office, a result that they see as constitutionally intolerable."

Bob Woodward, who as an investigative journalist alongside Carl Bernstein published the original reports of the Watergate scandal in 1972, believes this is a legal quagmire that is far from settled:

"I think a president can only be reached through impeachment and removal. But the House and Senate could conclude a president had obstructed, and conclude that was a 'high crime.'

"In Watergate, there was political exhaustion — plus, as Barry Goldwater said, 'too many lies and too many crimes.' These questions are now, in the end, probably up to the Republicans. The evidence was in Nixon's secret tapes. Is there such a path to proof now is one way or the other? We don't know."

One thing is for certain: Trump's lawyer probably should not write tweets for the president, considering that Trump considers those tweets as "official statements" of the Oval Office, when they possibly look like an admission of guilt.