You didn't see what you just saw. 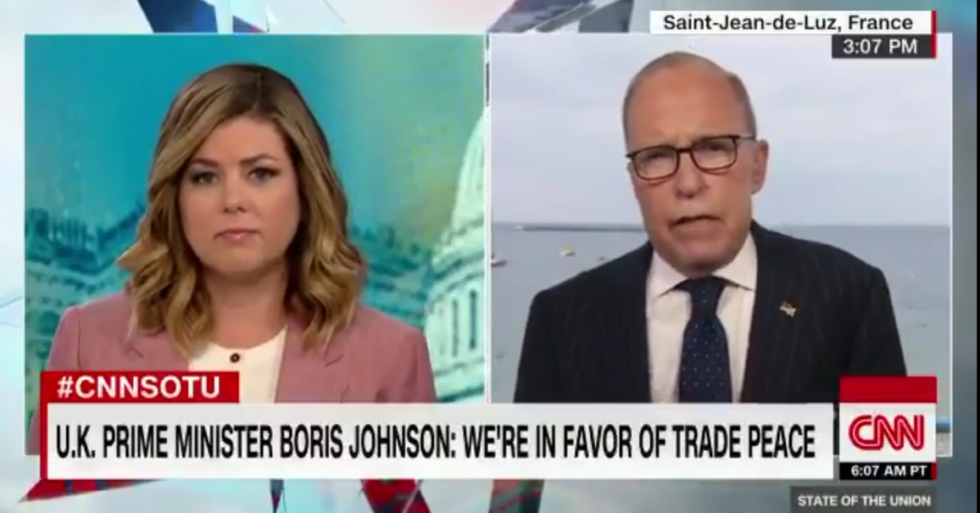 Back in July 2018, President Donald Trump infamously told a VFW gathering not to believe what they witness. Trump said:

"Just remember: What you're seeing and what you're reading is not what's happening."

The President's Director of the National Economic Council (NEC)—former CNBC host Larry Kudlow—had a similar moment in a live interview with CNN's Brianna Keilar on Sunday morning's State of the Union show.

When asked about remarks made by world leaders on camera during a meeting at the G-7 summit, Kudlow denied what had just been shown actually happened.

United Kingdom Prime Minister Boris Johnson criticized Trump's escalating trade war with China, saying, "We don't like tariffs on the whole." Trump has frequently been a proponent of his tariffs on Chinese imports, falsely claiming that China pays them, rather than American manufacturers and, subsequently, American consumers.

“The President’s been getting a lot of pushback on his trade war. The EU leader, Donald Tusk, warned that this would ‘lead to a recession.’ Macron says it is ‘bad for everyone.’ And even his closest ally at the G7, the new UK Prime Minister, Boris Johnson, said… ‘We don’t like tariffs on the whole'.”

Keilar's statements were backed by video and audio footage. But Kudlow said in response:

"Well, look, yes, I’m not sure I agree how you portrayed that, to be honest. I was in that meeting on the economy and trade."

After Kudlow fumbled a bit longer trying to rewrite the meaning of direct quotes, Keilar interjected;

Kudlow then tried to claim his presence at the meeting trumped reality.

But none apparently said it on camera or in associated interviews. Kudlow went on with:

"And they expressed support for President Trump, who is leading the way to try to get China to make changes."

Kudlow again tried to make the case that his presence at the meeting changed actual statements other G-7 world leaders made on camera at the meeting.

"I was in that room. And so that’s why I’m saying what you may have said—and I don’t know where these guys said that—is out of context."

Keilar was undeterred. Armed with the G-7 leaders' own words, she responded:.

“Look, I just have to take issue with that, Larry. You cannot deny that they do not like how this is being operated.”

Kudlow then claimed everything was "out of context.”

"That’s in the meeting, Larry. Larry, those words came out of Boris Johnson’s mouth… How do you argue with that?"

Kudlow tried to dodge the question:

"Actually, you want to know the truth, Brianna—I know you will probably not agree—my view was, the meeting this morning, in fact, the whole conference, including the unexpected luncheon between President Trump and President Macron, has gone very well, better than we thought, with a very positive vibe."

But this was not the only time Kudlow denied reality Sunday morning. Keilar's first question to Trump's NEC director regarded an answer President Trump also gave on camera.

Watch Trump answer the question about his China tariffs and second thoughts on his escalating trade war.

Trump clearly answered the question about escalating his trade war with China saying:

"Yeah, sure. Why not? I have second thoughts about everything."

But not according to Kudlow.

"Well, look, if I can reinterpret that, I mean, he spoke to us. He didn’t exactly hear the question."

Kudlow then added what he claimed Trump really meant even though nothing said by the President on camera reflected it.

Kudlow concurred with this revised version.

“That is correct. At the moment, that is absolutely correct."

Then Kudlow claimed to know the President's thoughts and that Trump's quoted on-air response to the specific question was misinterpreted.

"That was his thought. It somehow got misinterpreted. I’m not sure he heard the question altogether. It was a very crowded room. I was there. But, yes, his thought was, perhaps he needed to go higher."

But Keilar came back with another Trump quote.

"He also said he’s no longer planning on forcing U.S. businesses to leave China. So, it does seem as if he is softening on this issue broadly."

"No, he didn’t order. He did not order the businesses."

But even Kudlow could not completely deny reality.

"I know he said, ‘I hereby order.’ But what he said to them, in effect, was that you begin to look or you begin to search for ways to move out of China."

Watch extended footage of the CNN State of the Union interview here.

People were largely unsurprised by a Trump administration official's reliance on "alternative facts."

Counsel to the President Kellyanne Conway first coined the term for lies the Trump administration was caught telling.

@CNNSotu @brikeilarcnn I like his voice is getting higher and he's getting frustrated and he should just gotten off… https://t.co/fU5JjHcE00
— gvivaldi (@gvivaldi) 1566749771.0

And many likened the interview to Trump's own denials of reality.

It is difficult to have constructive discussions with people who work from a basis of alternative facts and denial of solid evidence.

To see what all the allusions are about, the George Orwell's 1950 dystopian classic novel 1984 is available here.