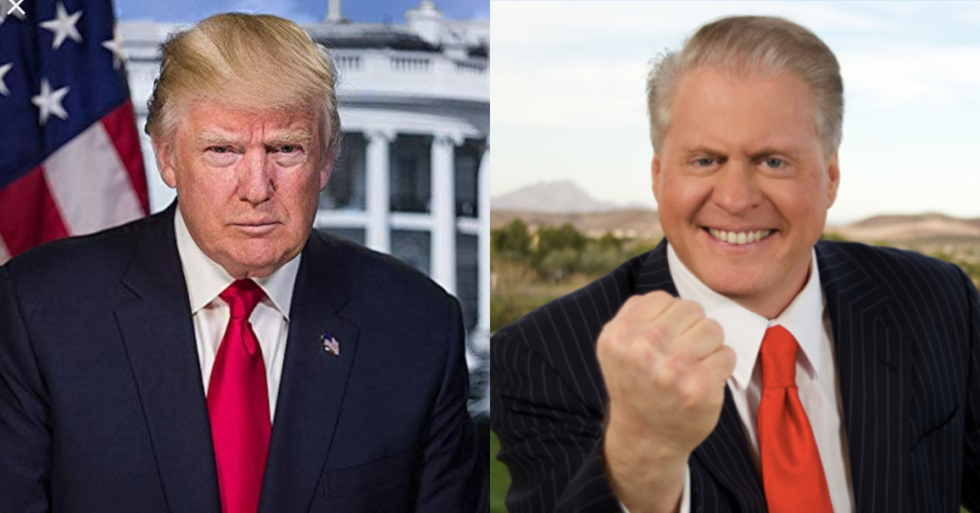 Armchair psychologists—and some actual clinicians—have accused President Donald Trump of several psychological conditions ever since he came to national attention in the 1980s. The most common accusation concerns Narcissistic Personality Disorder, but now people say Trump has a messiah or messianic complex.

A messiah complex is a term from psychology. It is closely associated with grandiosity, megalomania and delusional disorder: grandiose type.

It is defined as:

"A complex psychological state when a person believes that they are a savior destined to save the world/remake it in their vision. The individual may harbor the delusion of being divine or chosen by God."

So why are people accusing the President of having this diagnosis?

Another Twitter storm in which he quoted rightwing conspiracy peddler Wayne Allyn Root saying that Trump:

"is the best President for Israel in the history of the world and the Jewish people in Israel love him like he’s the King of Israel. They love him like he is the second coming of God."

Trump then tagged some of his favorite media organizations—Newsmax where the quote originated from Root, Fox & Friends and One America News Network—presumably hoping they would amplify the message further.

You can watch Root's comments below.

Root, who calls himself the conservative warrior, runs a website and hosts a radio show.

He is also clearly a fan of the President.

This mini tweet burst comes in the context of the firestorm created by Trump's claim Jews who vote for Democrats are "disloyal." But even for Trump, the choice to share the quote on Twitter seemed extreme.

Medical researcher and physician Dr. Eugene Gu summarized most of the reactions in his response.

We learn in med school that if someone comes to the emergency room calling themselves the King of Israel and the se… https://t.co/jxObfQNj3Z
— Eugene Gu, MD (@Eugene Gu, MD) 1566395022.0

@realDonaldTrump It’s so disheartening and quite frankly disgusting to see that all those Republicans who were so b… https://t.co/tquAdUDTg6
— Eugene Gu, MD (@Eugene Gu, MD) 1566388713.0

@realDonaldTrump Trump and the Republicans have weaponized false accusations of anti-Semitism while being the worst… https://t.co/zIxuUM77Jr
— Eugene Gu, MD (@Eugene Gu, MD) 1566389477.0

Others clearly concurred with the doctor's assessment.

Many referred to antisemitism in relation to Trump.

@realDonaldTrump Where President Trump doubles (triples and quadruples) down on hardcore antisemitism as he declare… https://t.co/NX1FM6xO7j
— David Rothschild (@David Rothschild) 1566387940.0

Right-wing trolls clinging to fact President Trump was quoting someone else while trumpeting himself as the Messiah… https://t.co/INQFzt57hm
— David Rothschild (@David Rothschild) 1566394970.0

@realDonaldTrump I said on my @hardball interview last night that the current occupant of the White House is pathol… https://t.co/ViiMvsf6a6
— Fred Guttenberg (@Fred Guttenberg) 1566392444.0

And the American Jews the President insulted during his on camera interview were not feeling as enamored as Newsmax host Wayne Allyn Root.

@realDonaldTrump Wayne Allyn Root may have nice words for you, Donald, but the 79% of Jewish Americans who voted De… https://t.co/FbhSsjz6QY
— MatthewDicks (@MatthewDicks) 1566387712.0

If Trump's Twitter post was meant to give more fodder about his popularity to his base, objective achieved. If it was meant to make amends with Jewish Democrats in the United States, it looks like the President will need to try something else.

The book Hitler's American Friends: The Third Reich's Supporters in the United States, available here, tells the history of Nazi sympathizers, nonintervention campaigners and other voices in America who advocated on behalf of Nazi Germany in the years before World War II.