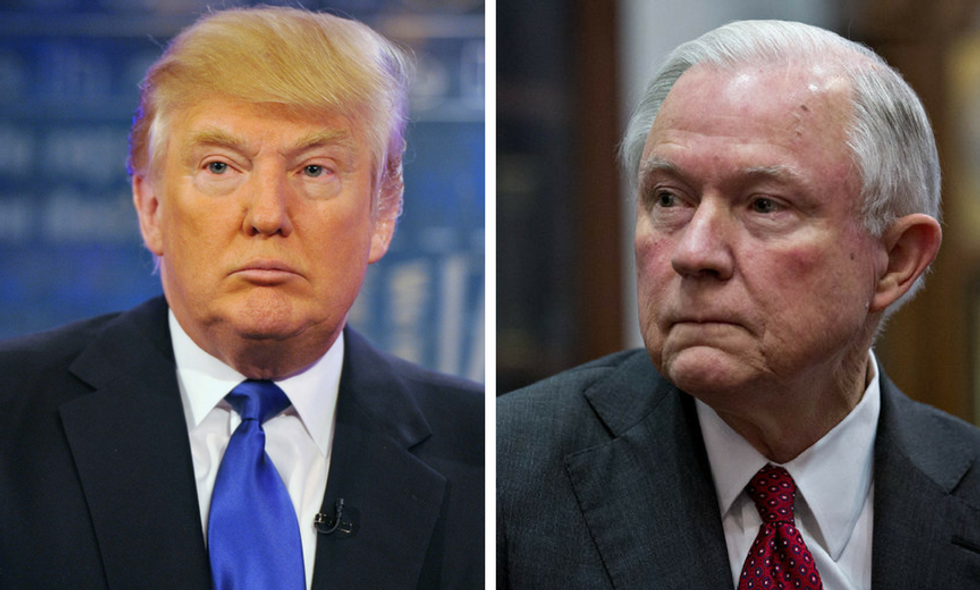 In a remarkably candid interview with The New York Times conducted in the Oval Office on Wednesday, President Donald Trump made clear how displeased he is with his Attorney General, Jeff Sessions, for recusing himself from the Russia probe.

On the topic of the Russia investigation, Trump said:

TRUMP: Well, Sessions should have never recused himself, and if he was going to recuse himself, he should have told me before he took the job, and I would have picked somebody else.

HABERMAN: He gave you no heads up at all, in any sense?

TRUMP: Zero. So Jeff Sessions takes the job, gets into the job, recuses himself. I then have — which, frankly, I think is very unfair to the president. How do you take a job and then recuse yourself? If he would have recused himself before the job, I would have said, “Thanks, Jeff, but I can’t, you know, I’m not going to take you.” It’s extremely unfair, and that’s a mild word, to the president.

Trump went on to explain the reason it was unfair was that it left him with an unknown deputy as Attorney General who then turned around and appointed Robert Mueller as special counsel in the Russia investigation. Trump added:

"A special counsel should never have been appointed in this case."

Some felt that Trump's words were akin to asking for Sessions's resignation, and that it would and should be forthcoming.

The President today effectively asked Sessions for his resignation. Will he resign or insist on being fired? https://t.co/bShMQJtrBI
— Preet Bharara (@Preet Bharara) 1500514176.0

And yes, I said that if Jeff Sessions does not resign this morning, it means nothing more or less than that the man… https://t.co/vKONHQsR1J
— Benjamin Wittes (@Benjamin Wittes) 1500553577.0

Others agreed with Trump's assessment.

I agree with @realDonaldTrump, his Attorney General should not have recused himself over reported incidental contacts with Russian officials
— Senator Rand Paul (@Senator Rand Paul) 1500552779.0

I stand with Rand in agreement with @realDonaldTrump. AG Sessions should not have recused himself in the Russia mat… https://t.co/r2D1ZNNEFc
— Eric Bolling🇺🇸 (@Eric Bolling🇺🇸) 1500553380.0

In addition to his comments about Sessions, Trump said that if Robert Mueller were to look into his family finances, that would be outside his purview.

Asked if Mr. Mueller’s investigation would cross a red line if it expands to look at his family’s finances beyond any relationship to Russia, Mr. Trump said, “I would say yes.” He would not say what he would do about it. “I think that’s a violation. Look, this is about Russia.”

That was interpreted by some as a threat to Mueller, but Trump made clear in the interview that he did not anticipate having to fire Mueller.

HABERMAN: Would you fire Mueller if he went outside of certain parameters of what his charge is? [crosstalk]

SCHMIDT: What would you do?

TRUMP: I can’t, I can’t answer that question because I don’t think it’s going to happen.