Donald Trump Jr. Tried to Go After Democratic Senator for Tweeting That the 'Future Is Female' and It Did Not Go Well For Him 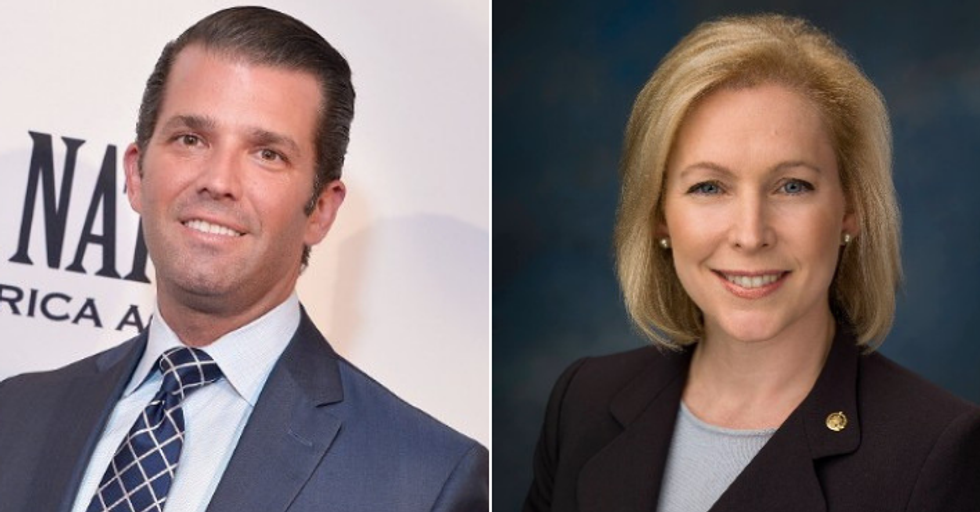 While those numbers are still far less than half, it is still a major demographic change from just a decade ago when Democratic Representative Nancy Pelosi of California became the first woman to ever serve as Speaker of the House. In the 110th Congress of 2008, there were 16 women in the Senate and 73 in the House.

South Dakota and Maine also elected their first female Governors in the 2018 midterm elections. More women also ran for offices in 2018 than ever before, at all levels of government.

In addition to more women entering Congress, more diversity will be represented in 2019. The first female Muslims and Native Americans, as well as the first Black woman to represent Massachusetts and first Latina to represent Texas will be in the 116th Congress.

Senator Kirsten Gillibrand (D-NY) took to Twitter on Wednesday to express her joy over the gains made by women, especially women of color, in 2018.

But not everyone likes the idea of either diversity or gender equality. For some, the idea of others gaining equality with their rights and privileges means they "lose" something.

Donald Trump Jr. responded to Senator Gillibrand's post, claiming strides by women and increased diversity mean there is "no future" for his sons.

People who understood Gillibrand's message quickly pointed it out to Donald Trump Jr.

This was not the first time Trump Jr. tried to be clever on Twitter and saw more pushback than support.

@DonaldJTrumpJr Can someone tell @DonaldJTrumpJr that women accumulating power in a male-dominated country isn’t a… https://t.co/8HCRAfDloV
— Ahmed Baba (@Ahmed Baba) 1544041168.0

@sternyoulearn @DonaldJTrumpJr @trumps_feed The future for them is being the sons of an entitled dumb ass who never… https://t.co/JeEIyxvJlk
— John Agnello (@John Agnello) 1544026345.0

Others thought Trump Jr. might be limited in his communications soon.

@DonaldJTrumpJr Just make sure they know when visiting hours are. Their mom will take care of the rest.
— Kate Newcomb (@Kate Newcomb) 1544034713.0

@DonaldJTrumpJr Tell them in a letter from prison. Kids love hearing from their Dads in prison. Plus they can sell the autographs on ebay.
— SquarePeg (@SquarePeg) 1544033806.0

You know what your girls would be more excited about, @DonaldJTrumpJr? Having a father who hadn't abandoned them to… https://t.co/TxnB2MVyhU
— Mrs. Betty Bowers (@Mrs. Betty Bowers) 1544027467.0

Senator Gillibrand did not respond to Trump Jr.'s tweet, however, the younger Trump did not tag Gillibrand or reply directly to her original post.