Donald Trump Jr. Just Tried to Mock Bill de Blasio on Twitter and Ended Up Pissing Off the Entire BTS Fandom Instead 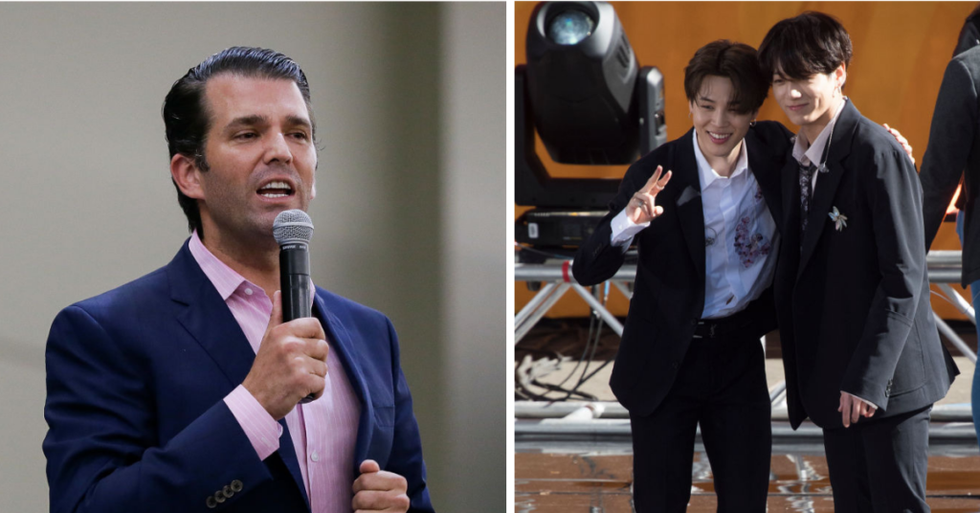 Shortly after New York City Mayor Bill de Blasio announced he would enter the presidential race, Donald Trump Jr. attacked him by sharing a picture of trash lining the sidewalks in Central Park. Trump Jr. characterized de Blasio's presidential bid as little more than a "PR stunt" and suggested he "should clean up his backyard first."

But what Trump Jr. shared isn't what Central Park looks like on a regular day. The refuse was left over from fans waiting to see a free concert from the K-Pop group BTS. As people pointed out, BTS was on Good Morning America's summer concert series the morning before Trump Jr. posted his tweet.

@DonaldJTrumpJr @NYCMayor As you well know this was from concert goers and clean up was in progress when I walked by at 8:30am.#Truth
— Ellen Wragge (@Ellen Wragge) 1558010847.0

The park was also cleaned up as soon as the concert finished. BTS even posted about it and thanked their fans for their support.

Btw thanks to the team and everyone else who helped clean up the place you know who you are, we finished in about a… https://t.co/t7Bvjia1ec
— SPOTLIGHTBTS (@SPOTLIGHTBTS) 1557944512.0

BTS fans camped out and waited in line for over a week with camping gear to see the K-Pop group perform, according to a report from Gothamist.

“Don’t back down in the face of the bully — take him on,” he says. “As president, I will take on the wealthy, I will take on the big corporations, I will not rest until this government serves working people. Donald Trump must be stopped. I’ve beaten him before and I’ll do it again."

President Donald Trump responded to the news of de Blasio's announcement with a heated tweet. de Blasio "is a JOKE, but if you like high taxes & crime, he’s your man," Trump wrote. "NYC HATES HIM!"