Donald Trump Just Claimed He Tried to Stop the 'Send Her Back' Chants at His Rally, But the Video Says Otherwise 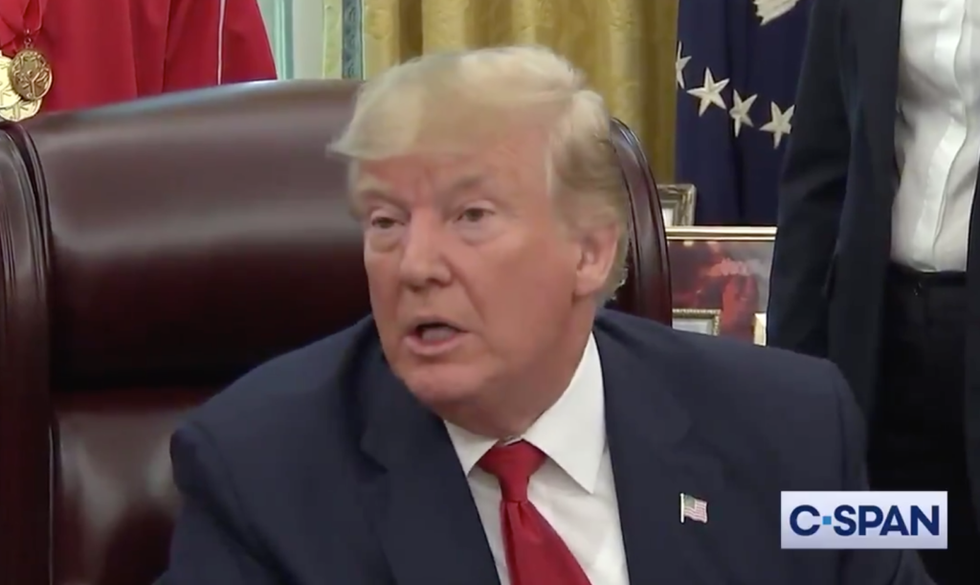 As outcry mounts against the racist chants of his supporters at a Wednesday night rally in North Carolina, President Donald Trump attempted to distance himself from the moment that horrified Americans across the country.

While taking questions from reporters in the Oval Office, Trump claimed that he tried to stop his supporters' cries of "send her back," referring to Congresswoman Ilhan Omar (D-MN), by "speaking very quickly."

But upon closer inspection of the tape, Trump waits nearly 15 seconds as the chant builds before beginning to speak.

In addition to allowing the chants of his supporters to carry on, Trump arguably incited it with racist tweets in the days before, calling for four Democratic congresswomen of color—including Congresswoman Omar—to "go back" to their countries. Omar escaped violence in Somalia as a child before making a home in the United States as a fully naturalized American citizen.

@Acosta Trump thought Republicans would fully approve of the chant but woke up to condemnation from all sides. Now… https://t.co/c81XAEJYV2
— Denise Shearin (@Denise Shearin) 1563470070.0

Trump has many more rallies to hold before the fateful night in 2020 when we'll know who the next president is. It remains to be seen whether he'll stop the next round of racist chants trumpeting from stands full of his supporters.