After Racehorse Named 'Covfefe' Wins a Big Race, Trump Suggests His 'Covfefe' Tweet Actually Had 'Deep Meaning' After All 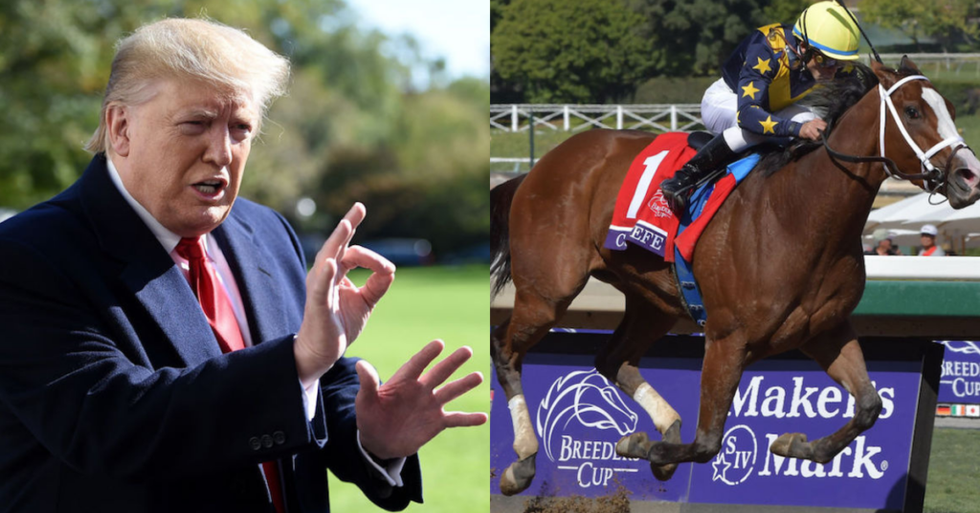 On Saturday, the website created by Fox News pundit Tucker  Carlson—The Daily Caller—shared video of a horse who owes her name to a slip of the presidential digits.

The 3 year-old filly's name is Covfefe—and she's on a winning streak. Saturday she won the Breeder's Cup at the Santa Anita racetrack.

From there, Mitch Roschelle of PricewaterhouseCoopers shared it with the simple hashtag #Covfefe. Then it caught President Donald Trump's attention.

Trump disputed Tucker Carlson/The Daily Caller's characterization of the origin of the nonsense word. Instead of a mistweet, perhaps it was a bit of higher wisdom.

Trump retweeted Roschelle with the caption:

"Great! But how do you know it was a 'mistweet?' May be something with deep meaning!"

Some Trump supporters didn't find a deep meaning, but did find a deep state conspiracy which included Google scrubbing all records everywhere of the completely real word covfefe.

But despite how compelling the evidence was of "the Google" removing a word from existence immediately after Trump tweeted it, most people had a simpler explanation.

Others focused on how deep the President is.

@realDonaldTrump You thought that Citizen Kane was about how great Charles Foster Kane was. You can’t see obvious m… https://t.co/5zUhAFcntc
— JRehling (@JRehling) 1572879085.0

Others wondered when the President found time to tweet.

@MusicmanBU @lifesafeast @realDonaldTrump i think he should be doing his job personally but I guess we know what yo… https://t.co/PpkTjWiHTr
— Multi (@Multi) 1572890605.0

While some pointed out covfefe did gain meaning in 2017 as a legislation acronym.

Others were just done being polite.

"We gave the name to her because we thought she was special and we thought the name was kind of funny."