We Now Know What Advice Donald Trump Was Given by His Aides Ahead of His Helsinki Press Conference--and Yeah, He Ignored It 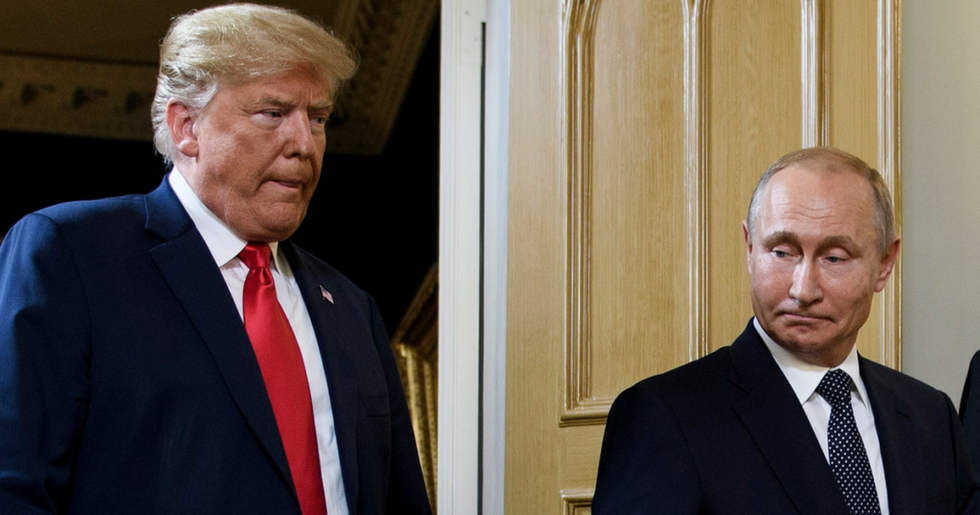 An unnamed White House source is claiming President Donald Trump ignored the advice given to him by his advisors ahead of his press conference with Russian President Vladimir Putin in Helsinki, Finland on Monday. Trump's comments at the media event were “very much counter to the plan,” the source said.

The president was given nearly 100 pages of briefing materials prior to his meeting with Putin, according to reporting from the Washington Post.

A second person familiar with the preparations said "everyone around Trump" had expected the president to have reviewed the information and take a tough stance against Putin on issues like election meddling and the annexation of Crimea, Ukraine.

The person said Trump "made a game-time decision" to blame the United States for the decline in American-Russian relations.

One senior White House official revealed Trump held several briefing sessions prior to his meeting with Putin but chose to ignore his advisors and briefing materials.

This was especially apparent in the president's remarks about Russia's interference in the 2016 presidential election.

When asked by a reporter if he believed Russia attacked our election, Trump acknowledged the unanimous conclusions of American intelligence agencies but sided with Putin, who Trump said was "strong and powerful in his denial."

“The president has been more reluctant than most to weigh into the idea that Russia did it and they’re still doing it,” said Senator Lindsey O. Graham (R-S.C.). “He felt that would undermine his own election.”

Putin even admitted he wanted Trump to win the election, though he maintained his denial of having anything to with attempts to disrupt America democracy.

“Where are those servers?” Trump asked. “Where are Hillary Clinton’s emails?”

Trump then reminded everybody that he beat Clinton in the 2016 race, fueling speculation over whether his denial of Russian election interference is a projection of his own insecurity about his legitimacy as president.

"I beat Hillary Clinton easily ... We won that race," Trump boasted. "And it’s a shame that there can even be a little bit of a cloud over it ... We ran a brilliant campaign and that’s why I’m president.”

At one point, Putin gifted Trump with a soccer ball, which critics said could be bugged.

Finally, if it were me, I’d check the soccer ball for listening devices and never allow it in the White House.
— Lindsey Graham (@Lindsey Graham) 1531757614.0

Putin's soccer ball gift to Trump may be bugged, or worse — and the US may never know https://t.co/vCuNzLNQAQ
— Business Insider (@Business Insider) 1531819284.0

But according to the Post, six White House officials came forward to discuss the events leading up to Monday's Trump-Putin fiasco. Sources said Trump's strange behavior began over the weekend while the president played golf at his resort in Turnberry, Scotland.

One person close to the president said Trump spent the weekend “growling" over Friday's indictments of 12 Russian military intelligence officers, who were indicted by Special Counsel Robert Mueller's office for their roles in hacking the DNC and attempting to access and disseminate stolen voter registration information.

The source said Trump worried the indictments could hurt him politically, however, another official told the Post that Trump planned on addressing the indictments with Putin during their one-on-one meeting on Monday.

The unnamed official said Trump was more excited to sit down with Putin than he was before last week's NATO conference, where Trump blasted allies and accused NATO of cheating the United States.

Trump "loved the summit with Kim Jong Un" last month in Singapore, the official recalled. “He thinks he can sit down eye to eye with these guys, flatter them and make a deal.”