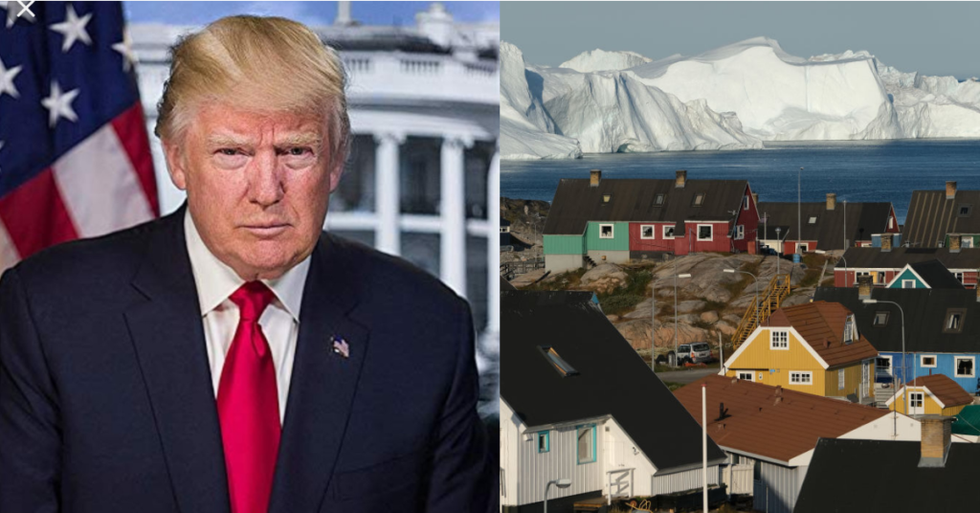 Greenland is an autonomous country of the Kingdom of Denmark northeast of the Canadian Atlantic provinces between the Arctic and Atlantic Oceans. President Donald Trump wants to buy it, according to multiple sources.

There's only one small problem—or rather one 836,300 square mile problem—among many. Neither Denmark nor Greenland put out the for sale sign.

"If he is truly contemplating this, then this is final proof, that he has gone mad."

"The thought of Denmark selling [over] 50,000 citizens to the United States is completely ridiculous."

Now Greenland is making fun of our dumb president too. What part of “America being respected again” is this??
— Molly Jong-Fast (@Molly Jong-Fast) 1565968597.0

Greenlandic politician, Aaja Chemnitz Larsen—holding one of two seats for her home country in Denmark's parliament—tweeted in Danish:

"No thanks to Trump buying Greenland!"

"On the contrary, a better and more equal partnership with Denmark should be the way forward for a stronger and longer term free Greenland."

Larson added in an interview with Reuters:

"I am sure a majority in Greenland believes it is better to have a relation to Denmark than the United States, in the long term."

"My immediate thought is ‘No, thank you’."

Greenland's Ministry of Foreign Affairs echoed that sentiment on Twitter.

"Of course, Greenland is not for sale."

"[We view the reports] as an expression of greater interest in investing in our country and the possibilities we offer."

"Because of the unofficial nature of the news, the government of Greenland has no further comments."

"We are open for business, but we’re not for sale."

The difference between Donald Trump and Greenland? Greenland is not for sale.
— Amy Klobuchar (@Amy Klobuchar) 1565987065.0

The United States former ambassador to Denmark stated it would be a catastrophe.

If anyone believes Trump has either in mind, please reconsider your reality.
— Rufus Gifford (@Rufus Gifford) 1565907831.0

Much of the anger online is centered around colonialism.

Of course diplomats in the manner of their leader, President Trump, responded to such concerns in a fitting manner. Young adult book author Darren Hunter (@darren_hunter1) responded:

"The other option is we can just take it in 5 minutes so watch your mouth tough guy."

"The whole idea that another country could buy Greenland — like it should be a colony — is so strange to us."

"The Greenlandic people have their own rights."

"I hope it is a joke—to not just buy a country but also its people."

The President's idea reportedly began with a comment by a guest at a dinner. The guest remarked—without verification—Denmark was struggling to pay the nearly $600 million annual subsidy it gives Greenland and maybe Trump should buy it.

"What do you guys think about that? Do you think it would work?"

According to Kulusk, Greenland resident and hotel owner Jakob Ipsen, no.

“It didn’t happen then and it’s not going to happen now."

So why Greenland? The ice?

The Greenland ice sheet is a vast body of ice covering 660,000 square miles, roughly 80% of the surface of Greenland, although climate scientists note it is melting at an alarming rate. It is still the second largest single body of ice on Earth after the Antarctic ice sheet.

But protecting or utilizing the ice is an unlikely reason. Most pundits wager the idea is more about Trump stamping his name on something as a presidential legacy.

As visions of the Trump Memorial 30 foot Mexican paid for wall become ever more distant, there is not much left for a positive or lasting Trump legacy.

Maybe this could do the trick.

The bestselling book The Ice at the End of the World: An Epic Journey into Greenland's Buried Past and Our Perilous Future is available here.