Donald Trump Reportedly Just Installed a Golf-Simulator in the White House, and If It's the One People Think It Is, This Thing's Huge 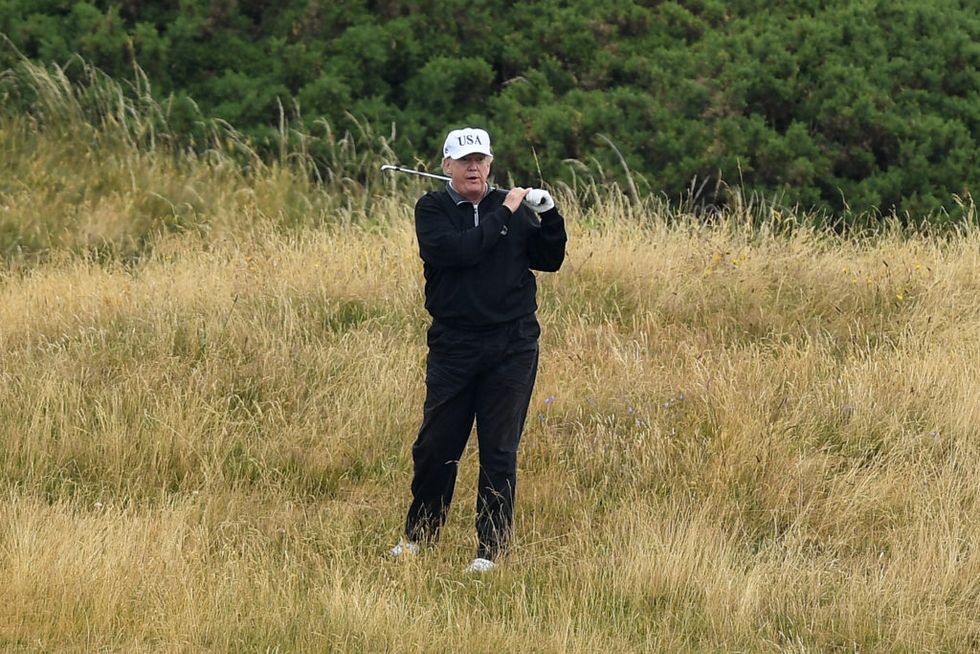 TURNBERRY, SCOTLAND - JULY 15: U.S. President Donald Trump plays a round of golf at Trump Turnberry Luxury Collection Resort during the U.S. President's first official visit to the United Kingdom on July 15, 2018 in Turnberry, Scotland. The President of the United States and First Lady, Melania Trump on their first official visit to the UK after yesterday's meetings with the Prime Minister and the Queen is in Scotland for private weekend stay at his Turnberry. (Photo by Leon Neal/Getty Images)

President Donald Trump until recently had a 69-day streak without actually playing a round of golf on one of his Trump-branded golf courses, but it looks like he's been making up for lost time according to two White House insiders who revealed the president has installed a room-sized “golf simulator” game in his personal quarters.

The new system replaces an "older, less sophisticated golf simulator that had been installed under President Obama," The Washington Postreported, and cost roughly $50,000. An official who spoke to The Post said the president paid for the new installation, which some speculate was created by the Danish company TrackMan Golf, out of his own pocket. Trackman's technology is used at 16 Trump hotels and resorts. The company has not yet confirmed whether they provided the technology at the White House, however.

You can see the alleged simulator for yourself below. Trackman Golf's website reads: “Feel the excitement of playing real golf on beautiful courses year round."

Trump, the anonymous officials revealed, installed the golf simulator a few weeks ago, likely at the same time federal workers were going without pay as a result of the longest government shutdown in American history, which kicked off after he declined to sign a stopgap funding bill that would have averted one because he disagreed with Congress over border wall funding.

This latest news prompted many to criticize the president.

I thought people already knew about the golf simulator. What did you think “Executive Time” was? https://t.co/ELHhcVkYrh
— Angry Staffer (@Angry Staffer) 1550077093.0

Playing golf about once per week wasn’t enough for Trump, he had to build a full-room video game golf simulation at… https://t.co/Pz5ZtPvczM
— Adam Best (@Adam Best) 1550085929.0

CNN's Chris Cillizza also reminded of one of the president's oft-repeated quotes. Trump once claimed he "may never see [his] property" because he'd be too busy "working" for the American people.

The construction may shed some light on a controversial aspect of Trump's schedule.

A recent Axios exposé of Trump's leaked schedules from November 7, 2018, to February 1, 2019, revealed that much of the president's schedule is logged under "executive time":

Trump, an early riser, usually spends the first 5 hours of the day in Executive Time. Each day’s schedule places Trump in “Location: Oval Office” from 8 to 11 a.m.

But Trump, who often wakes before 6 a.m., is never in the Oval during those hours, according to 6 sources with direct knowledge.

Instead, he spends his mornings in the residence, watching TV, reading the papers, and responding to what he sees and reads by phoning aides, members of Congress, friends, administration officials and informal advisors.

The president responded on February 10 once it emerged that new schedules showed he spent half his time in "executive time," saying he “'probably work[s] more hours than almost any past president.’"

The White House official who spoke to The Post claimed Trump has not used the simulator during his "executive time" since it was installed.