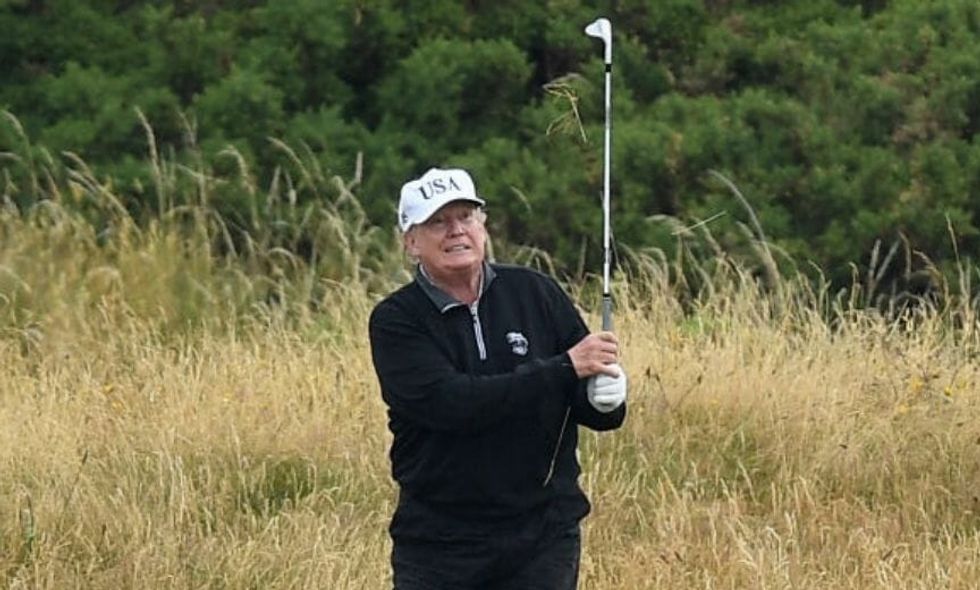 As Hurricane Dorian threatened to ravage Florida and other parts of the United States, President Donald Trump cancelled a scheduled visit to Poland in order to monitor the hurricane's developments from the United States.

The President raised eyebrows, however, when footage of him golfing instead of working was released on Monday.

The optics of playing golf as a hurricane approached struck the ire of many Trump critics. Among them was London mayor, Sadiq Khan. When asked about Trump's cancelled visit to Poland, Khan told Politico:

"He’s clearly busy dealing with a hurricane out on the golf course.”

Trump didn't take kindly to Khan's words at all, and soon fired back on Twitter.

The incompetent Mayor of London, Sadiq Khan, was bothered that I played a very fast round of golf yesterday. Many P… https://t.co/iRLsf4Noau
— Donald J. Trump (@Donald J. Trump) 1567522096.0

After claiming his golf trips were "very inexpensive," Trump unsurprisingly invoked Obama and his trips to Hawaii. In reality, Trump's 213 documented golf trips have cost over $109 million dollars in taxpayer money—just shy of Obama's taxpayer vacation costs for the entire eight years of his presidency.

He then criticized Khan for the "totally out of control" knife crime rate in London. The city has seen an uptick in knife crime in recent years, but considering the 53 people dead from mass shootings in the United States last month alone, many felt Trump was throwing stones from a glass house.

@realDonaldTrump Yeah, because there are so many mass knifing incidents. How about YOU focusing more on the mass shootings in the US?
— JustMyOpinion (@JustMyOpinion) 1567538188.0

@realDonaldTrump Are you OKAY? Your country has at least one mass shooting, killing kids, each week and you are so… https://t.co/JtltmphnQK
— Bleezy (@Bleezy) 1567539737.0

@realDonaldTrump At least they don't have to worry about weekly mass shootings and weak politicians that are afraid of the NRA.
— Tuna (@Tuna) 1567538509.0

His hypocrisy on golf outings garnered strong reactions as well.

@realDonaldTrump President Obama went to Hawaii, where he was born, twice a year at most. You skip out of DC to pla… https://t.co/dhICgj2yx2
— TimeForACTION (@TimeForACTION) 1567522436.0

President Obama has a major meeting on the N.Y.C. Ebola outbreak, with people flying in from all over the country, but decided to play golf!
— Donald J. Trump (@Donald J. Trump) 1414122849.0

The hypocrisy of it all.

Listen to George Takei's new podcast, 'Oh Myyy Pod!', where we explore the racially charged videos that have taken the internet by storm.