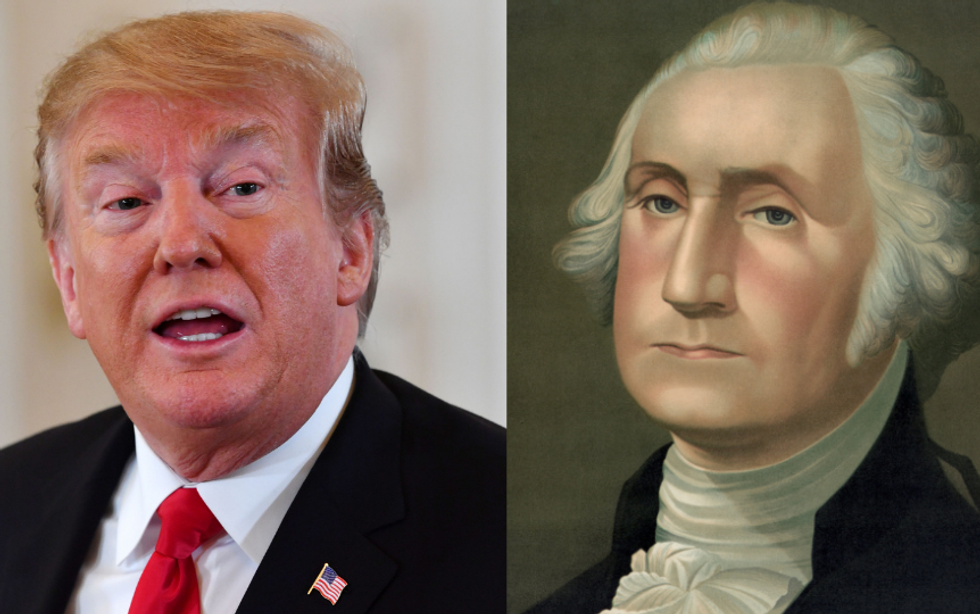 President Trump toured George Washington's historic Mount Vernon compound last year, and had some sage advice for America's first president. "If he was smart, he would’ve put his name on it."

Mount Vernon was home to George and Martha Washington. According to a recent report from Politico, Trump seemed less interested in the rich history of the compound and more interested in why Washington hadn't thought to secure his legacy via a personal brand. Trump reportedly said:

“If he was smart, he would’ve put his name on it. You’ve got to put your name on stuff or no one remembers you.”

In case you need a reminder, Washington's face is on the dollar bill, his visage is one of four likenesses carved into Mount Rushmore, and he did have the state capital named after him. "Good point," laughed Trump.

@kylegriffin1 Thank God men like Washington, Jefferson, Adams - and their wives - were more interested in the welfa… https://t.co/jC2GgaVqpn
— Tajalithaca (@Tajalithaca) 1554897163.0

What's more, George Washington was unlikely to have named any of his real estate ventures after himself.

He was notoriously reticent to flaunt the extravagance of his presidency, claiming he was unfit to hold the office and insisting on staying in public lodgings during the trip from Mount Vernon to New York, where he was to be inaugurated. "He asked his countrymen not to make a fuss over his inauguration and they repeatedly, resolutely, and resoundingly ignored him," wrote Slate's John Dickerson.

If you’re interested in George Washington and his feelings about celebrating himself: https://t.co/PpGKI2xjPg
— John Dickerson (@John Dickerson) 1554913429.0

Trump, on the other hand, has given his name to many of his real estate ventures. Trump Tower may be the most infamous, but others include Trump International Hotels, Trump Plaza, several golf courses, and even steaks.

Joining the Trumps on the tour was French president Emmanuel Macron and his wife Brigitte. The tour was led by Mount Vernon president and CEO himself, Doug Bradburn, who struggled to maintain the attention of President Trump. According to Fox News, "Bradburn reportedly said the Macrons were more knowledgeable about the estate than the commander-in-chief."

The Macrons may have known more about U.S. history than America's president, but Trump was an expert in one thing: money. He reportedly asked if Washington was "really rich," and expressed admiration for his real estate dealings.

As for the Mount Vernon estate itself, Trump was unimpressed. He criticized the 18th century architecture, claiming "the rooms were too small, the staircases too narrow, and he even spotted some unevenness in the floorboards," reported Politico. "He could have built the place better, he said, and for less money,"

George Washington will probably be remembered despite Trump's concerns. Not everyone needs eponyms to secure their legacy.