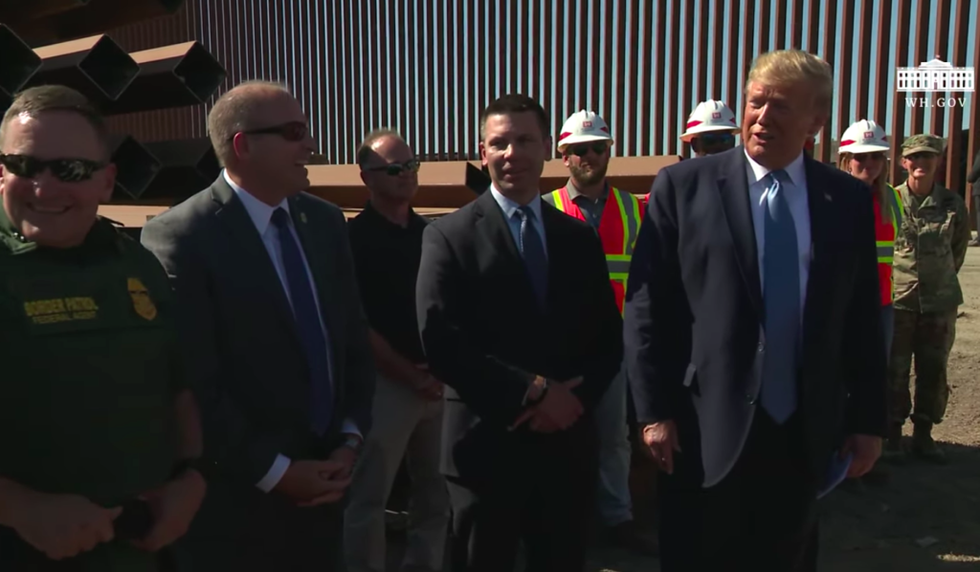 President Donald Trump took a trip to visit a portion of the replaced fencing along the United States border with Mexico. The new bollard style fence is going to an area where fencing already existed.

The President also took the opportunity to talk up his border wall to the press.

During the course of bragging about his wall, Trump attempted to speak about some of the more sophisticated security aspects.

"One thing we haven't mentioned is technology, they're wired so we'll know if someone is trying to break through. You may want to discuss that a bit, general."

"Sir, there could be some merit in not discussing that."

Predictably, the General's warning did not keep Trump from going on to speak about said technology himself, saying:

Former Trump administration staffers, as well as current members of the administration, have claimed the less Trump knew about national security matters the better, the implication being that the President would reveal top secret or classified information while speaking to the press, bragging to foreign leaders or on Twitter. We now see why.

People were swift to mock Trump for his loose lips.

The general’s response should be written in sharpie in block letters on a card & clipped into a harmonica holder th… https://t.co/VsGhkAZGI8
— Philip Gourevitch (@Philip Gourevitch) 1568847225.0

@ScottMStedman That general may be selecting his dancing costume this weekend; Sean can help.
— Tahiti Trot (@Tahiti Trot) 1568847621.0

@ScottMStedman Good on him for actually telling Trump "no." That guy showed more courage and patriotism in that one… https://t.co/QyKkrgTTVP
— Nefarious Means (@Nefarious Means) 1568847327.0

At least we can now all be certain that the Federal Government is not hiding an alien spaceship in Fort Knox. https://t.co/gP5iju2IHJ
— Andrew Thaler (@Andrew Thaler) 1568853421.0

@adrean_shirra @ScottMStedman I suspect they are lying to him. For all we know they are telling him that the "techn… https://t.co/yefSsvRtjO
— Nefarious Means (@Nefarious Means) 1568848623.0

@ScottMStedman @gtconway3d If @POTUS is still looking for the leak in his administration, maybe someone could hand… https://t.co/qGBco4S6dy
— kdino (@kdino) 1568845928.0

The book White House Warriors: How the National Security Council Transformed the American Way of War is available here.