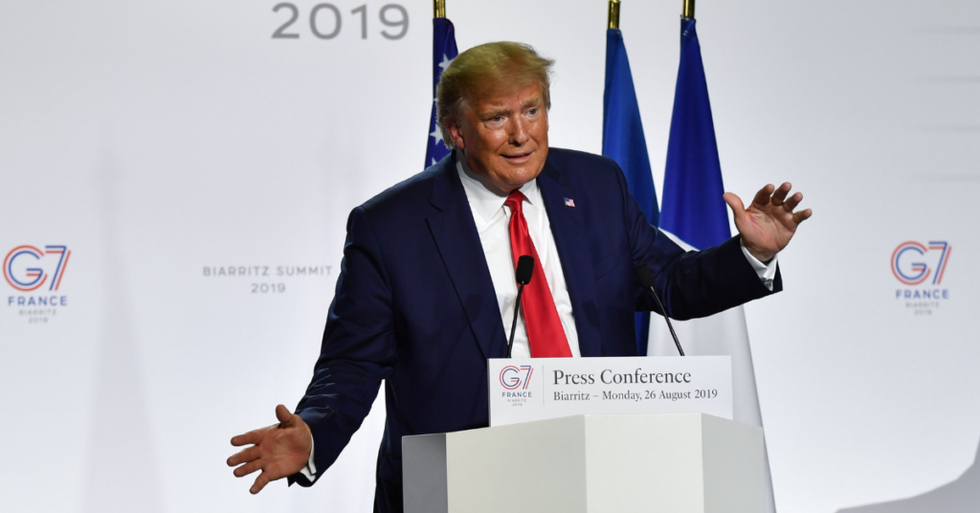 President Donald Trump during a press conference in Biarritz, south-west France on August 26, 2019, on the third day of the annual G7 Summit. (Photo by Nicholas Kamm/AFP/Getty Images)

But the President had good news to share with the press at the G7. He told reporters:

"They have been hurt very badly but they understand this is the right thing to do and I have great respect for it. This is a very positive development for the world. I think we are going to have a deal."

The Dow Jones Industrial Average had gone into freefall in the last weeks over the tariffs tit-for-tat Trump started. So the news that China contacted the United States to ask to return to the table and resume trade talks was welcomed.

It even sparked a bounceback on Wall Street. But the stock market may not retain those gains.

It turns out Trump's announcement was less than factual. After the President made his public statement, Geng Shuang of the Chinese Foreign Ministry said:

"Regarding the phone call in the weekend, I am not aware of that. I can tell you clearly that I haven’t heard of such a thing."

When asked to comment on the Chinese rebuttal, Trump said:

"We have had calls at the highest level, but I don’t want to talk about that."

Then this week CNN reported that Trump aides verified the President's claims about Chinese phone calls asking Trump to negotiate with them were lies.

While the Trump administration officials couched their statement by saying the President wanted to "project optimism" by conflating public statements made by China's vice premier with actual direct communication, others simply labeled it more Trump lies.

I don't know why this particular lie offends so, but it really bugs me that Trump made up that crap about China cal… https://t.co/m1pvggUZBP
— David Lazarus (@David Lazarus) 1567126845.0

Given the unprecedented level of presidential obfuscation since Trump took office, no one was overly surprised when the lies were exposed by China and acknowledged by the Trump administration.

However this time the lies affected the stock market and people are crying foul.

If Elon Musk said that General Motors wanted to talk about buying out his company, and it was a lie, the SEC would… https://t.co/CQn99LDO94
— American Veteran (@American Veteran) 1566853684.0

So Trump aides admit he blatantly lied and fabricated calls with China to ”boost markets”? This would be an enorm… https://t.co/cShjbo330G
— Justin Kanew (@Justin Kanew) 1567109236.0

Trump lies to world leaders in an apparent effort to manipulate markets. A more morally charitable view is that he… https://t.co/bmJa0thUsS
— Ken Caldeira (@Ken Caldeira) 1567180592.0

Trump had been trying to blame his failing economy on the press, Democrats in general, Representative Seth Moulton specifically and the federal reserve.

None of those stories caught on with the public or managed to cause a market upswing like the lies about phone calls from China.