Donald Trump Just Showed Reporters a Piece of Paper He Claims Contains His Agreement With Mexico, and the Jokes Came Rolling In 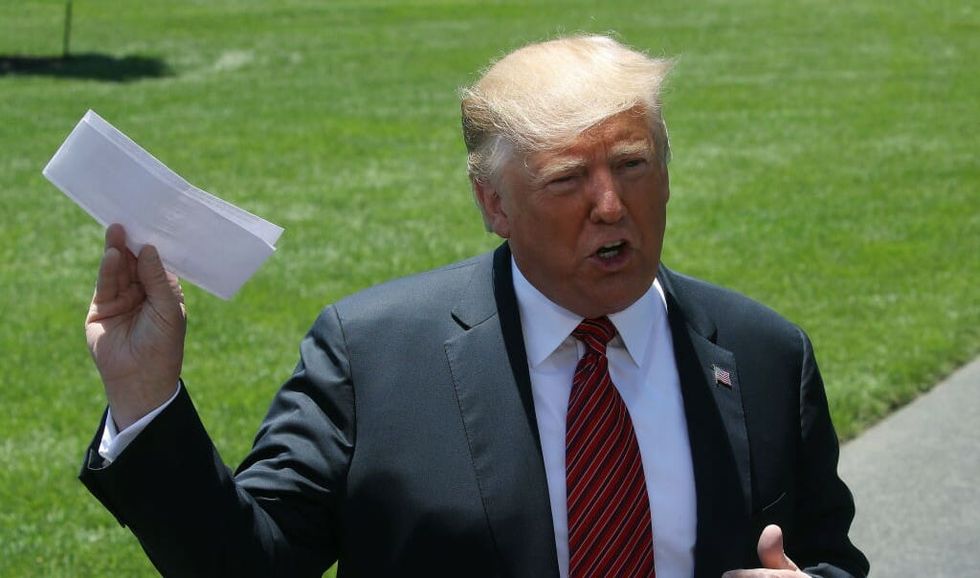 President Donald Trump holds a piece of paper he said was a trade agreement with Mexico, while speaking to the media before departing from the White House on June 11, 2019 in Washington, DC. (Photo by Mark Wilson/Getty Images)

At the end of May, President Donald Trump announced he would enact substantial tariffs against the United States' largest trading partner, Mexico, if they did not take steps to stop migrants from reaching the United States' southern border. The initial threat drew backlash from both sides of the border.

But nine days later Trump declared victory and announced via Twitter a deal was made and the heavily criticized tariffs canceled. But Mexican officials refuted Trump's claim stating the agreement he said his tariffs threat spawned had actually been proposed months prior.

In response to the fact-check by Mexico, the President began talking about extra as yet undisclosed concessions by Mexico that he won. But Mexican officials disputed that claim as well.

So on Tuesday, June 11, President Trump showed proof of his hard won secret extras promised  by Mexico to avoid his 5% tariffs.

President Trump held up a folded piece of paper and said it was the agreement the White House recently made with Me… https://t.co/S0EZ4bIq9y
— POLITICO (@POLITICO) 1560273867.0

The proof came in the form of a folded piece of paper. The President declined to show any of the cameras what was on the paper.

"I'm going to let Mexico do the announcement at the right time."

But people questioned what, if anything, was actually on the paper that related to any added agreements from Mexico.

Despite the dramatic announcement, the President drew more jeers than cheers as people guessed what was actually on the sheet of paper.

Photographers on scene got a closer look.

“the Government of Mexico will take all necessary steps under domestic law to bring the agreement into force with a… https://t.co/zhT70LoiMY
— Jabin Botsford (@Jabin Botsford) 1560277160.0

The closer look seemed to also refute the President's claims.

@jabinbotsford @realDonaldTrump @washingtonpost @postpolitics So it's an agreement where they are agreeing they may… https://t.co/aiwVr3WQbM
— Pé Resists (@Pé Resists) 1560280340.0

Meanwhile, Mexico's Foreign Affairs Minister reiterated that his country has nothing additional to announce as no new agreement was made beyond what they proposed months before President Trump's tariff threat.