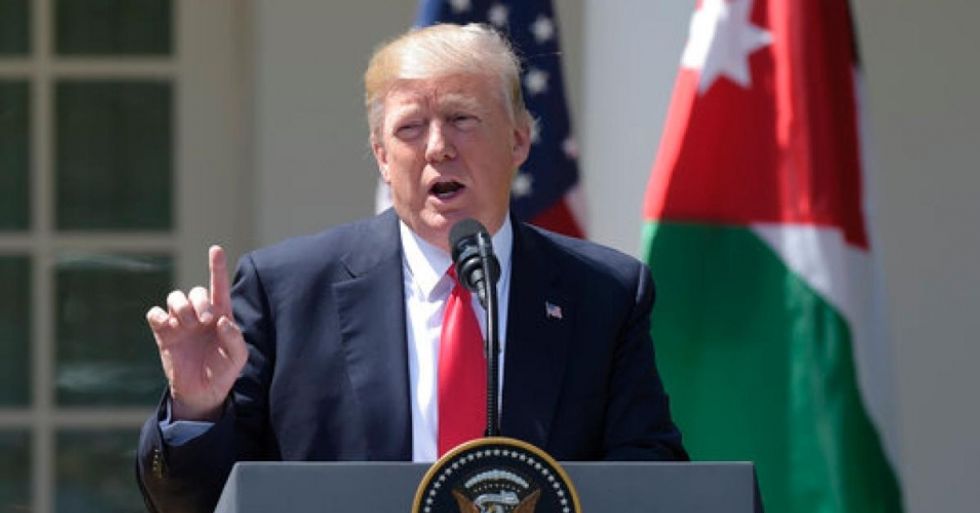 Speaking at a White House press conference, President Donald Trump appeared to take responsibility for recent events in Syria, condemning the chemical attack that killed more than 80 civilians as a "heinous" act.

"Yesterday's chemical attack, a chemical attack that was so horrific in Syria against innocent people, including women, small children and even beautiful little babies, their deaths were an affront to humanity," Trump said, speaking in the Rose Garden alongside Jordan's King Abdullah II. "These heinous actions by the Assad regime cannot be tolerated. The United States stands with our allies across the globe to condemn this horrific attack and all other horrific attacks, for that matter."

The president added that the attack had changed his views on Syrian President Bashar al-Assad. "When you kill innocent children, innocent babies, little babies, with a chemical gas that is so lethal that people were shocked to hear what gas it was, that crosses many, many lines, beyond a red line, many many lines," he said, referring to a line that his predecessor, President Barack Obama, had drawn before a similar attack by Assad's troops in 2013.

Trump's statements lie in stark contrast to his initial response to the attack, in which he accused the Obama administration of exacerbating the conflict.

“These heinous actions by the Bashar al-Assad regime are a consequence of the past administration’s weakness and irresolution,” Trump said in a statement Tuesday afternoon. “President Obama said in 2012 that he would establish a 'red line' against the use of chemical weapons and then did nothing. The United States stands with our allies across the globe to condemn this intolerable attack.”

When asked about his past statements about Obama, Trump said, "I now have responsibility, and I will have that responsibility and carry it very proudly," but this did not stop him from further criticizing his predecessor.

"When he didn’t cross that line after making the threat,” Trump said, “I think that set us back a long ways, not only in Syria, but in many other parts of the world, because it was a blank threat.”

But in the past, Trump has advocated for the Obama administration to "do nothing" in Syria, as his past tweets suggest.

Trump proposed a non-interventionist stance in more than a dozen tweets between 2013 and 2014, repeatedly stating that "Syria is NOT our problem."

The president's critics noted, however, that in neither response did he did offer any details on how US strategy in Syria would change. Nor did he directly criticize Russia, which has actively backed the Assad regime and has remained silent following worldwide condemnation of the attack other than initially to suggest the chemical attacks were the result not of Assad's actions but rebel bombings of chemical plants--a claim derided as false by eye-witnesses and the international community.

Others within Trump's administration have expressed their concerns about Russia's involvement in the conflict, as Nikki Haley, the US Ambassador to the United Nations, did during a meeting of the United Nations Security Council yesterday afternoon.

"When the United Nations consistently fails in its duty to act collectively, there are times in the life of states that we are compelled to take our own action," Haley said. "For the sake of the victims, I hope the rest of the council is finally willing to do the same. How many more children have to die before Russia cares?"

Earlier this morning, Russia challenged Trump to devise a strategy on Syria after Rex Tillerson, the nation's Secretary of State, issued a statement calling for Russia and Iran to discourage Assad from ordering further attacks on civilians.

"Russia's approach to Assad is clear. He is the legal president of an independent state. What is the US approach?" ministry spokeswoman Maria Zakharova told CNN in a text message.

Kremlin spokesman Dmitry Peskov minced no words. "It's indeed a very menacing course of events, dangerous and horrible crime. However, sticking labels on everyone, prematurely, is not a correct thing to do, in our opinion," he told reporters.

Russia insists it had no warplanes in the vicinity of the attack.

Syria continues to maintain that rebels were responsible for the attack. Syrian Foreign Minister Walid al-Moallem denied the Syrian military had ever used chemical weaponry, but autopsies on three victims conducted in Turkey indicated exposure to chemical substances.