Trump Explains His Baffling Reference to What's Happening in Sweden 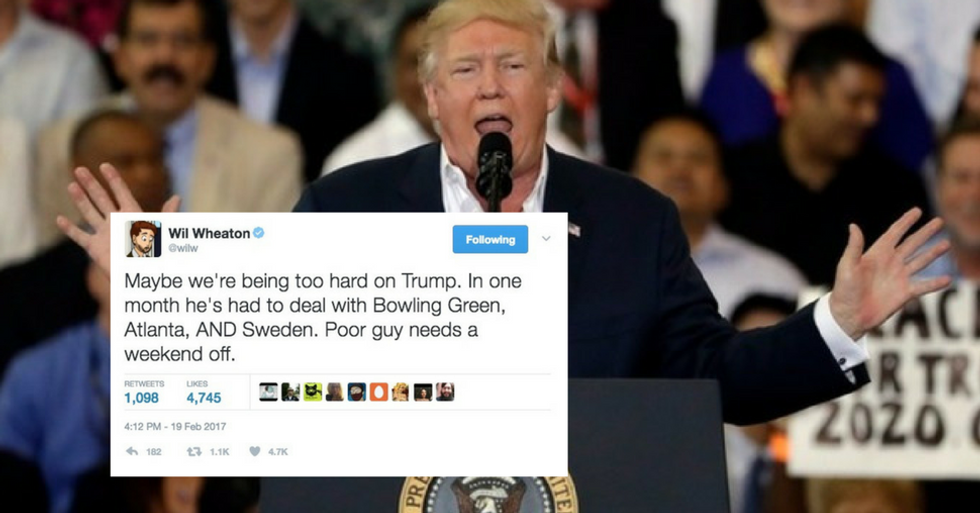 President Donald Trump attempted to explain remarks he made at a Florida rally over the weekend about something ominous happening "last night" in Sweden. In a statement posted to his personal Twitter account, the president said he obtained his information from a Fox News broadcast.

My statement as to what's happening in Sweden was in reference to a story that was broadcast on @FoxNews concerning immigrants & Sweden.
— Donald J. Trump (@Donald J. Trump) 1487541421.0

The Fox News broadcast in question was a segment on anchor Tucker Carlson’s show on Friday night, which included a clip from a new film by Ami Horowitz that claims migrants in Sweden have caused the nation's crime rate to skyrocket. “They oftentimes try to cover up some of these crimes,” Mr. Horowitz said, arguing that those who voice their concerns are decried as racists and xenophobes. He then notes that Sweden "had its first terrorist Islamic attack not that long ago" and says the nation has only gotten a "taste" of the migrant crisis which has been a point of contention across much of Europe. (Horowitz referred to a suicide bomber's attack in Stockholm in 2010, but that attack took place before the current migrant crisis.)

The Swedish policemen that were interviewed by the filmmaker  (an alarmist political movie called Stockholm Syndrome) said the filmmaker asked them questions but then used their quotes out of context. The police statements were what Carlson had featured on Fox News. Said one of the Swedish policemen of the 'news' segment, ”We don’t stand behind it. It shocked us. He has edited the answers. We were answering completely different questions in the interview. This is bad journalism.”

Horowitz's documentary first made headlines last year after he told Breitbart News that there is a "correlation" between immigration and incidents of rape. “Over the last two years, they’ve taken in over 350,000 Syrian refugees,” he said at the time. “The reason why I went there was to investigate why Sweden has become the rape capital of Europe. Rape was not unknown, but relatively minor. There were few incidents of rape, let’s say about ten years ago. And rape has absolutely skyrocketed in Europe. So that was the initial impetus on why I went there. Of course, we found out that there was, in fact, a correlation between the immigration and the rape.”

However, as many social scientists have pointed out, Sweden has a higher "incidence" of rape because it has a broader definition of rape and better reporting of incidents than other Western European nations. There has been no evidence that increased migration has anything to do with the rape statistics, leaving many Swedes baffled.

“I do not have a clue what he was referring to,” said Henrik Selin, a political scientist and deputy director of the Swedish Institute. “Obviously, this could be connected to the fact that there has been a lot of negative reporting about Sweden, since Sweden has taken in a lot of refugees.” (The Swedish Migration Agency projects the country will accept between 25,000 and 45,000 refugees this year.)

The White House defended Trump's statements. “He was talking about rising crime and recent incidents in general, and not referring to a specific incident,” said Sarah Sanders, the principal deputy press secretary.