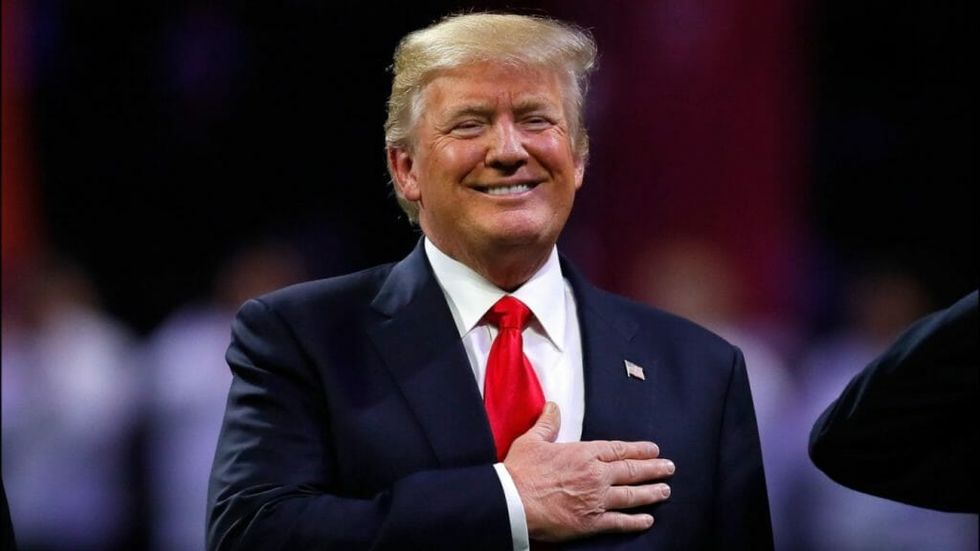 U.S. President Donald Trump on field during the national anthem prior to the CFP National Championship presented by AT&T between the Georgia Bulldogs and the Alabama Crimson Tide at Mercedes-Benz Stadium on January 8, 2018 in Atlanta, Georgia. (Photo by Kevin C. Cox/Getty Images)

After a reported brief meeting between Zinke and Florida's Republican Governor Rick Scott at the Tallahasee airport, Zinke amended the expansion with oil-drilling in the Atlantic Ocean off Florida and in the eastern Gulf of Mexico "off the table."

In a statement, Zinke said:

I have witnessed Governor Scott's leadership through hurricane season and am working closely with him on Everglades restoration. He is a straightforward leader that can be trusted. President Trump has directed me to rebuild our offshore oil and gas program in a manner that supports our national energy policy and also takes into consideration the local and state voice. I support the governor's position that Florida is unique and its coasts are heavily reliant on tourism as an economic driver. As a result of discussion with Governor Scott's [sic] and his leadership, I am removing Florida from consideration for any new oil and gas platforms."

Zinke revealed no plans to meet with governors of other coastal states to hear their concerns, or whether Interior officials had consulted with Governor Scott before the announcement last week.

But is that meeting really the reason for exempting Florida? Some people don't think so.

And Michael Moore presented another theory.

WAIT! WHAT? Trump’s removing Florida from the list of states to do offshore drilling after I’ve already rented my f… https://t.co/BYyrJzpzTG
— Michael Moore (@Michael Moore) 1515553940.0

Moore refers to this announcement:

It is not known whether Zinke will exempt other states whose governors protested the drilling along their shores. Those governors included several Republicans. California Attorney General Javier Becerra stated:

California is also 'unique' & our 'coasts are heavily reliant on tourism as an economic driver.' Our 'local and state voice' is firmly opposed to any and all offshore drilling. If that's your standard, we, too, should be removed from your list. Immediately."