His base will love this. 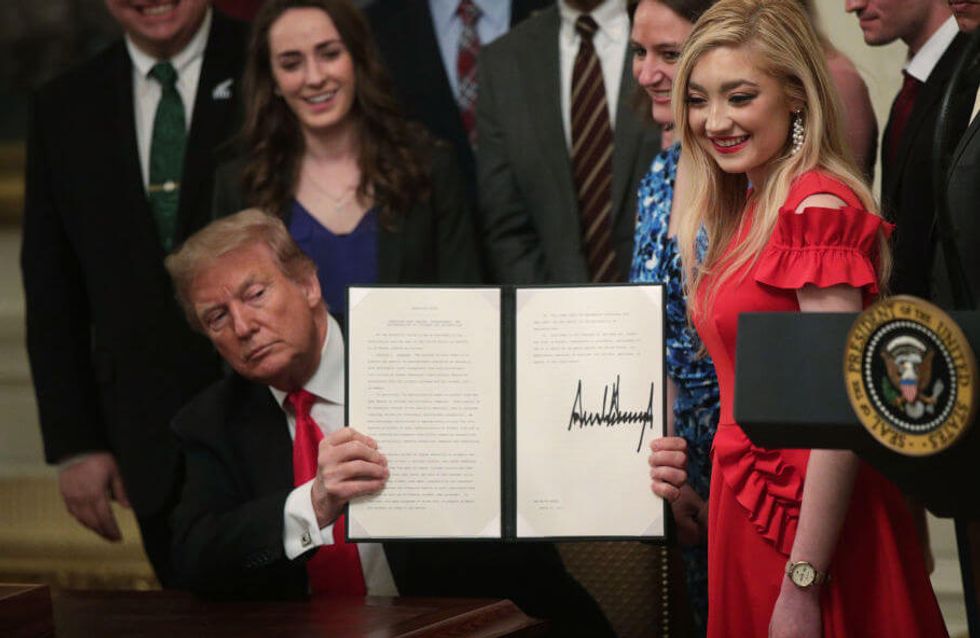 Conservatives put pressure on the Trump administration to ensure their free speech and freedom of religion, even if their definition includes silencing or negating the rights of others. In July 2018, President Donald Trump created—through then Attorney General Jeff Sessions—a religious liberty task force at the Justice Department to address some of those concerns.

The move was lauded by the President's Evangelical Christian base but criticized by human rights organizations as a free pass to discriminate in secular arenas while citing religion.

Now Trump is addressing the complaint about censorship of conservative voices on college campuses. Several speeches by high-profile conservatives were canceled after widespread protests from students or for lack of an audience.

Now the Trump administration intends to threaten the federal funding of colleges it deems are not following free speech guidelines on campus. The President signed an executive order directing "12 grant-making agencies to work with the Office of Management and Budget" to decide which schools research and education funds will be affected.

But how will the offenders be identified?

"I think the federal government can have a role in reinforcing the principles of the First Amendment and the commitment to freedom expression and academic freedom at public universities in particular."

"But when you get into the possibility of punitive measures and the withholding of federal funds based on, you know, particularly kind of very vague definitions of, you know an idea like free inquiry. That's worrisome."

Critics say the parameters for violations are too vague and open to abuse of power. Others claim the order addresses a problem that does not exist.

Should campuses be forced to fund speakers and speeches students refuse to attend? Does free speech extend to forced listening? Are schools to be penalized if individual students exercise their right to protest a speaker?

The President stated earlier this month:

"If they want our dollars and we give it to them by the billions they’ve got to allow people like Hayden [Williams] and many other great young people and old people to speak. And if they don’t, it will be very costly."

Williams was allegedly assaulted at UC Berkley while trying to recruit students for Turning Point USA. The organization, founded by Charlie Kirk, maintains a Professor Watchlist of college professors it alleges discriminate against conservative students and advance left-wing propaganda in the classroom.

Kirk tweeted about the President signing the executive order today.

Based on Trump's remarks at CPAC, 11 groups issued a statement in advance of the signing. They characterized the President's newest order as "a dangerous solution to a largely nonexistent problem."

"While the specific provisions of the promised executive order have not been revealed, like such legislation they are liable to interfere with institutional autonomy and governance in ways that is more likely to stifle than encourage free expression and diversity of opinion."

"There are and always will be individuals on campus and in society generally who wish to silence those with whom they disagree. But punitive and simplistic measures will only exacerbate the problems they may create."

After the signing ceremony, people commented on whether this action would be applied equally to all colleges and all speech or just to promote and protect conservatives.

Some called it out as dog whistle politics, like the religious liberty task force.

Author and University of North Georgia professor Matthew Boedy mapped out how the order has little to do with free speech and much to do with dismantling public education: a stated goal of Betsy DeVos whose Department of Education will be integral to the enforcement of the new executive order.

@charliekirk11 and other conservative “free speech” advocates use the whipping post of #FreeSpeech to berate what t… https://t.co/m7WANjdxdr
— Matthew Boedy (@Matthew Boedy) 1553192794.0

If you think there is a liberal conspiracy on campus silencing you, then you head to the federal dole, right? Trump… https://t.co/dXVFYOlvj7
— Matthew Boedy (@Matthew Boedy) 1553192980.0

Why didn’t Trump go after that money? Why would a president and a conservative “free speech” industrial complex not… https://t.co/8DHZizvm2I
— Matthew Boedy (@Matthew Boedy) 1553193060.0

It would have destroyed private schools. For example @LibertyU, that bastion of silencing free speech, with its mil… https://t.co/8xVsRejfN1
— Matthew Boedy (@Matthew Boedy) 1553193234.0

Federal research $ go back a long time. In general they have replaced the millions lost by decades of low state fun… https://t.co/bfBlFpY4gk
— Matthew Boedy (@Matthew Boedy) 1553193333.0

PS. if you need any evidence that Trump's executive order is really about targeting liberals on campus and their fu… https://t.co/K77Zvb1f9j
— Matthew Boedy (@Matthew Boedy) 1553195154.0

How exactly the order will be applied will only be evident once it is used. Until then, everything is just speculation. Nossel of PEN America stated:

"Just the fact that the President first announced this at CPAC, the fact Jeff Sessions when he was attorney general making a speech in front of Turning Point USA, a conservative group, this issue, you know, kind of adds this ideological cast."

"You know, really the First Amendment is nonpartisan. It doesn't have any ideological bias. It protects speech from across the spectrum. And so, the fear here is that you know, this is not just about protecting all kinds of speech it's about protecting certain kinds of speech and I think that's the way the executive order is implemented it's highly problematic."