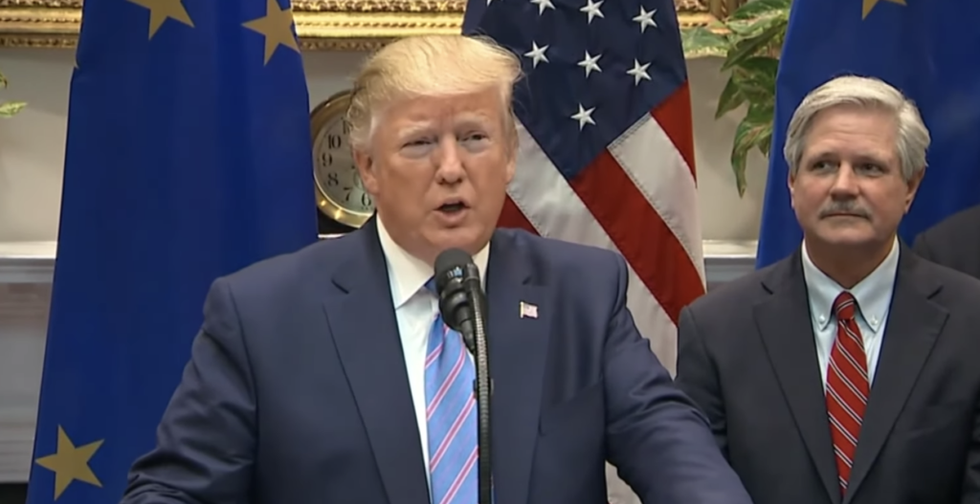 On Friday afternoon, President Donald Trump put aside his past beef with the European Union to boost exports of literal beef to its countries.

After triumphantly posing for pictures with the deal, Trump suddenly took the microphone again to make an announcement.

"We're working on a deal where the European Union will agree to pay a 25% tariff on all Mercedes-Benzes, BMWs coming into our nation," Trump said, "So we appreciate that."

Trump then announced he was just joking.

"I'm only kidding. They started to get a little bit worried."

Trump threatened earlier this year to slap tariffs onto European automobiles and their parts, leading some to fear that the EU would introduce retaliatory tariffs as it did with steel and aluminum in 2018.

@atrupar @SenJohnHoeven This is unwatchable. The people who appear in these videos will soon want to have themselves edited out of them
— Mona Sigal M.D.🆘 (@Mona Sigal M.D.🆘) 1564770745.0

Some observed that the "joke" may not be a joke at all, but a veiled threat.

@atrupar @SenJohnHoeven This is not a joke. This is classic bullying and a veiled threat straight out of Goodfellas
— freecloud11 (@freecloud11) 1564771350.0

In fact, after the meeting, Trump told reporters that auto tariffs are still on the table.