Trump Reveals He Doesn't Understand How The National Debt Works

Trump made the puzzling remarks during an interview with Sean Hannity. 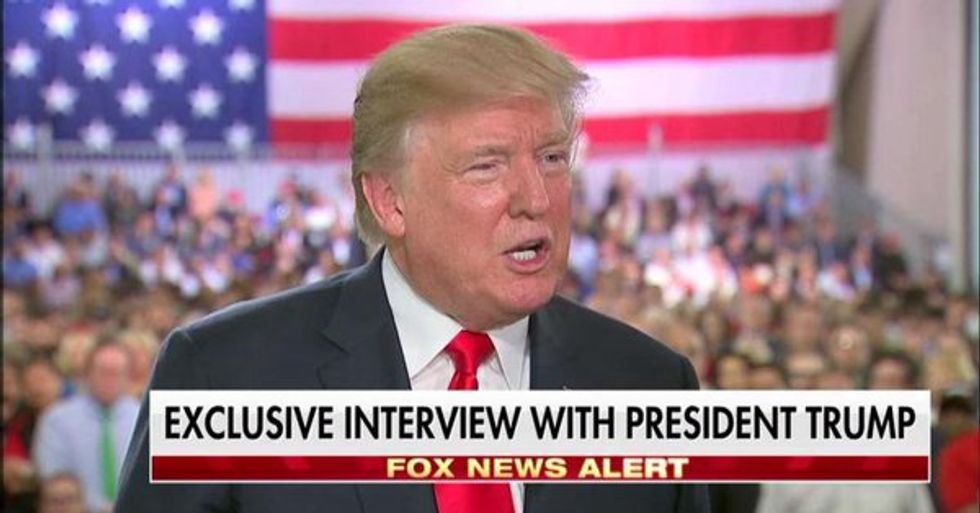 In a Fox News interview Wednesday, President Trump bragged of gains in the stock market. Then he suggested his administration was "in a sense reducing (national) debt."

"Possibly picked up the whole thing (national debt) in terms of the first nine months, in terms of value. So you could say, in one sense, we're really increasing values. And maybe in a sense, we're reducing debt. But we're very honored by it."

Trump appeared to suggest that stock market gains lead to a reduction in the country's national debt. But that isn't how it works. That isn't how money works.

And it wasn't just a momentary gaffe. President Trump made the same claim earlier that afternoon in his tax reform speech in Harrisburg, Pennsylvania.

Very proudly, just in the stock market alone, we have increased our economic worth by $5.2 trillion, that’s right, since Election Day. $5.2 trillion. Think about that, that’s a quarter of the $20 trillion that we owe.”

Critics have been citing Trump's business record since he announced his candidacy. Over-leveraged, multiple bankruptcies, and routinely trying to cut costs by refusing to pay contractors what he owed, it is a matter of public record that Donald Trump struggled with finances in his private-sector life. He also has the dubious distinction of losing money running a casino.

Trump is now in the White House where his financial actions are on international display. That added scrutiny may provide a better window into why he had so many failures in the business world.

This apparent lack of financial understanding comes after a prominent Republican also pointed out Trump's inadequacies in foreign policy and not knowing how diplomacy or national security work.