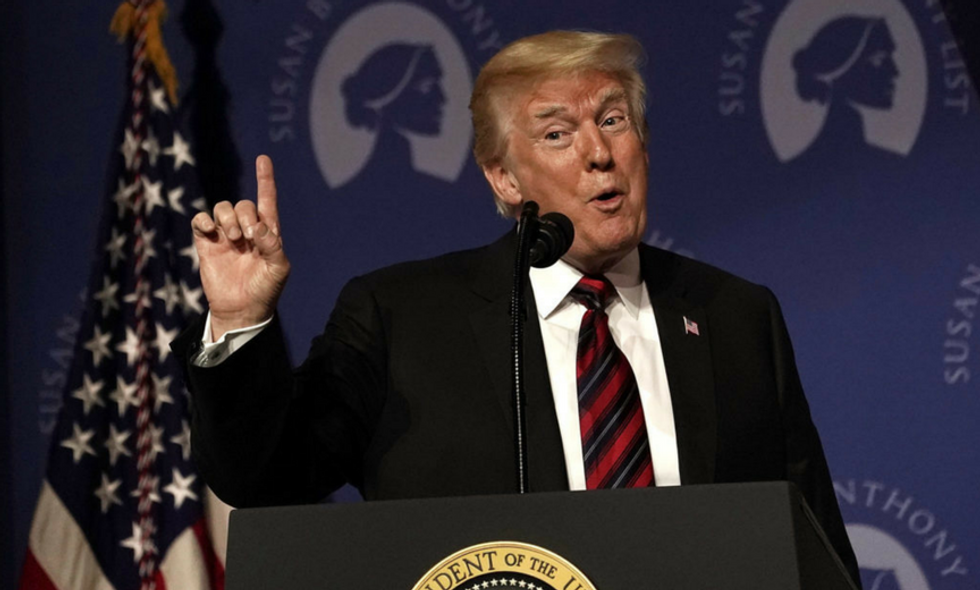 WASHINGTON, DC - MAY 22: U.S. President Donald Trump speaks during the Susan B. Anthony List's 11th annual Campaign for Life Gala at the National Building Museum May 22, 2018 in Washington, DC. President Trump addressed the annual gala of the anti-abortion group and urged people to vote in the midterm election. (Photo by Alex Wong/Getty Images)

During a speech to the Susan B. Anthony List's 11th Annual Campaign for Life Gala on Tuesday night, President Donald Trump warned the audience of a possible Democratic takeover of Congress in this November's midterm elections. Trump said that a Democratic sweep of Congress would mean an undoing of "historic gains" he claims to have achieved.

"But if Democrats gain power they will try to reverse these incredible gains," the president said. "These are historic gains. They will try and reverse many of them."

Trump then broke from his script and suggested that voting in 2018 may not be as important as when people voted for him in the 2016 presidential election.

Trump's remarks contradict the words of emcee Kathy Ireland, who introduced Trump along with a message about the importance of the midterm elections.

Trump takes stage at anti-abortion gala to enthusiastic applause — and with “I’m Proud to be An American” playing i… https://t.co/vV1rDpKgHt
— Dan Diamond (@Dan Diamond) 1527033750.0

@TrumpsTaxes @ladyhawkerfinds Who will protect our elections from the Russian hacking, meddling, propaganda and dis… https://t.co/VnMRTlnz8U
— KE (@KE) 1526847279.0

Trump also praised Kellyanne Conway, one of his closest White House advisers who is set to receive the Susan B. Anthony List's 11th Annual Campaign for Life Gala Distinguished Leader award. “She'll do the shows that nobody else dares go near,” the president said of Conway. “Great going, Kellyanne. What a help.”

Susan B. Anthony List President Marjorie Dannenfelser, breaking with her group's 2016 call to nominate anyone but Trump, said, “I’m totally eating my words" about the president. "I care far less about the veneer and the polish than I do about the concrete actions that have concrete consequences,” she said. The group has referred to Trump as the most "pro-life president" ever.

@ddiamond How many times a week do you just step back and say, “Donald freaking Trump is president”?
— Daniel Aguilar (@Daniel Aguilar) 1527035062.0

@ddiamond You would think that the GOP would have learned by now that Donald literally is incapable of ever pretend… https://t.co/RkTaRdxjjY
— Jonathan (@Jonathan) 1527035218.0

This all comes at a critical time for our country, as intelligence officials brace for another round of Russian interference into an American election.

Yesterday, several Trump administration officials warned Congress of "ongoing efforts by Russia to interfere in the 2018 midterm congressional elections as the federal government prepares to hand out $380 million in election security funding to states."

The leaders of the FBI, Department of Homeland Security, and the Director of National Intelligence told 40-50 House members that the looming threat of Russian interference into the 2018 midterms is still very much alive.

"We see them continuing to conduct foreign influence campaigns,” Homeland Security Secretary Kirstjen Nielsen said. "We need to be prepared."

Rep. Michael McCaul (R-TX), who chairs the House Homeland Security Committee, echoed these concerns, saying after the briefing: "not only Russia but possibly other foreign adversaries are now going to start looking at how they can meddle in the midterm elections and we need to be prepared. We were caught off guard last time.”

On May 8, the Senate Intelligence Committee issued a report outlining exactly how the Russians were able to interfere with the 2016 presidential election.

The report added that "these cyber actors were in a position to, at a minimum, alter or delete voter registration data.”

Democrats and members of the intelligence community are urging election officials to heed these warnings and enact measures to safeguard voting systems across the country. “It is clear that our government must do more and whatever possible to secure our elections from foreign interference. The integrity of our democracy is at stake,” said Rep. Bennie Thompson (D-MS), who serves on the Homeland Security Committee.

On Wednesday moring, Trump once again called the Russia investigation a "witch hunt."