Donald Trump Just Contradicted His Intelligence Director On Russia Again, and People Are Waiting for the Walkback

No one thinks that's true. 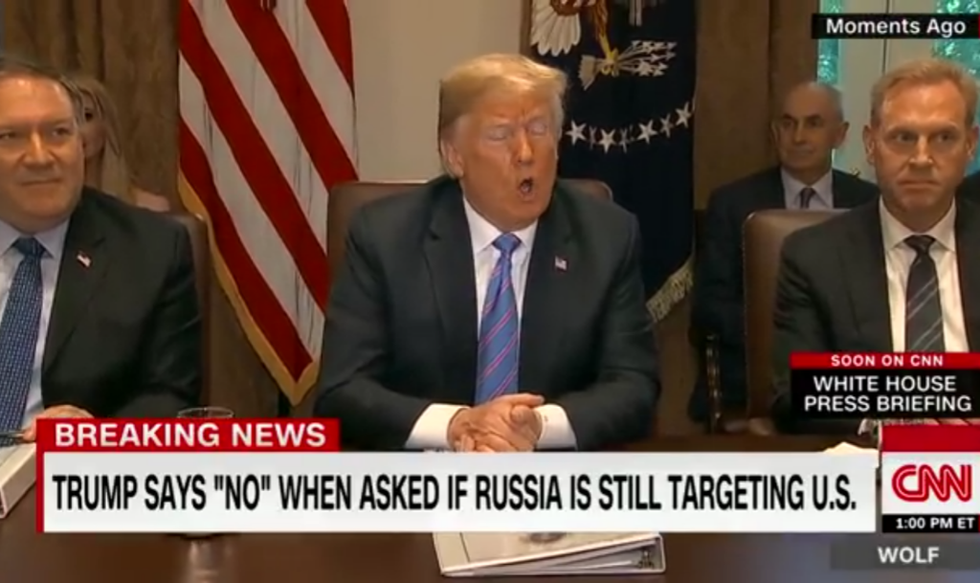 President Donald Trump stated Tuesday afternoon that he has "a full faith in our intelligence agencies." But less than 24 hours later, Trump contradicted his own national security advisers again in front of cameras by claiming Russia was no longer targeting the United States.

We have been clear in our assessments of Russian meddling in the 2016 election and their ongoing, pervasive efforts to undermine our democracy."

But Wednesday, in response to the question, "Is Russia still targeting the U.S., Mr. President?" Trump thanked the reporter then said, "No" while looking directly at her. A staffer can be heard in the background trying to get the press to leave the room quickly.

The warning signs are there. The system is blinking. It is why I believe we are at a critical point. Today, the digital infrastructure that serves this country is literally under attack.”

Coats characterized Russia as the “most aggressive foreign actor, no question. They continue their efforts to undermine our democracy.”

But the President apparently still disagrees with his own country's intelligence agencies in favor of the word of a foreign dictator. After the meeting with Putin, Trump discredited his own nation's security forces because the Russian President's denials of any interference were "powerful."

Wednesday, when asked to clarify his further denial of continued Russian meddling, Trump claimed no President had ever been tougher on Russia than him.

And there's been no president ever as tough as I have been on Russia. All you have to do is look at the numbers. Look at what we've done."

"Look at sanctions. Look at ambassadors not there. Look at, unfortunately, at what happened in Syria recently."

Just the day before this latest denial of Russian involvement in cyber attacks against the United States and attempts to interfere in national politics, the President did damage control for similar statements he made on Twitter and in Helsinki during a highly criticized press conference with Putin.

And people were quick to pick up on the contradiction between what the President said during his  walkback Tuesday, where he read from a prepared statement, versus his candid off the cuff answer on Wednesday.

BREAKING: Trump just lied and said Russia isn’t still targeting the US. We are literally under attack by the Russia… https://t.co/p8gF2w5KBE
— Scott Dworkin (@Scott Dworkin) 1531933431.0

Senate Intelligence Chairman Richard Burr on Trump saying Russia is not targeting US: “He needs to read the intelligence”
— Manu Raju (@Manu Raju) 1531940046.0

What world is Trump living in? Does he not understand what's going on? Is he being blackmailed because the Russians… https://t.co/XX6aRqcYCx
— Bernie Sanders (@Bernie Sanders) 1531934797.0

Former US Ambassador to Russia (who Putin wants to interrogate), when asked about Trump's Russia remarks: "This is… https://t.co/thTIDpHsGr
— John Whitehouse (@John Whitehouse) 1531933560.0

And some are calling out Trump's claim of no President being harder on Russia than he is.

Your daily reminder that Trump has been harder on me, a comic who tells dick jokes, than he has on the President of… https://t.co/RY7ayBxp8i
— Kathy Griffin (@Kathy Griffin) 1531890585.0

It remains to be seen if another written walkback for Wednesday's Trump statement regarding Russia will be read by the President Thursday.