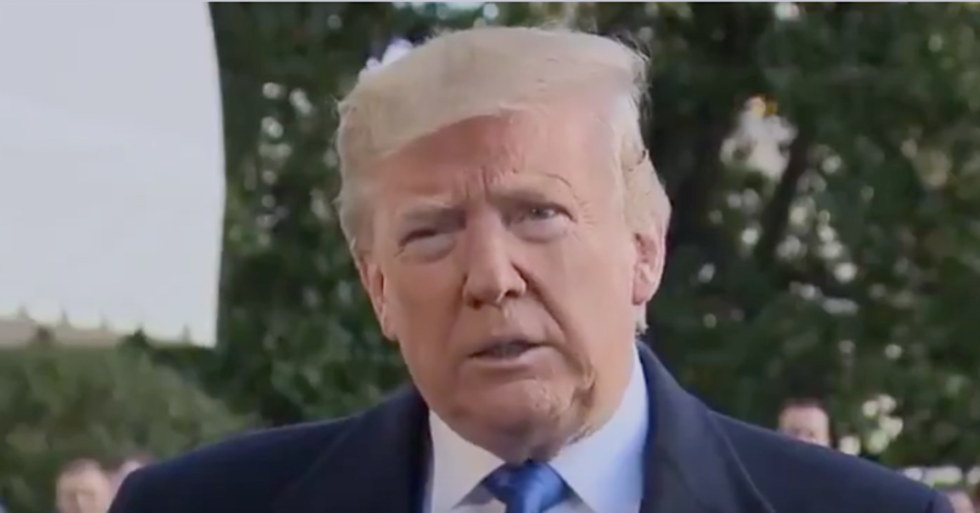 The phrase "moving the goal posts" refers to giving a set target or demand then when that demand is met, a new demand is immediately issued without acknowledging successfully meeting the original goal. The GOP and White House are being accused of moving the goal posts when it comes to the impeachment inquiry of President Donald Trump.

Republicans complained about a lack of a formally voted upon resolution for the impeachment. A resolution is not required, but Speaker of the House Nancy Pelosi gave them one anyway.

GOP House and Senate members tried to claim the closed door depositions conducted in accordance with rules created and enacted by the GOP were a kangaroo court. They accused Representative Adam Schiff of hiding things in hearings and during testimony 48 members of the GOP had full access to.

So to give the GOP the transparency they demanded when they stormed a Sensitive Compartmented Information Facility (SCIF) with their cellphones and disrupted proceedings for five hours, publicly televised impeachment hearings were approved as part of the resolution to proceed with the impeachment inquiry.

But now that they have everything they demanded, President Trump thinks televising the testimony regarding his impeachment is no longer a good idea.

Trump was one of those demanding everything be public, including releasing the name of the initial whistleblower—a potential violation of the Whistleblower Protection Act of 1989. The whistleblower's complaint was later corroborated by multiple Trump administration officials and appointees.

After weeks of demanding things that were never required under the impeachment process, now that he has everything he wanted, Trump had a definite change of heart.

He told reporters before leaving for events in Georgia:

"They shouldn't be having public hearings. This is a hoax."

However, Trump and the MAGA Minions—those GOP members of Congress devoted to Trump who disrupted, made demands and tried to discredit the impeachment inquiry—previously claimed the hearings were a hoax because they were conducted behind closed doors.

Unfortunately for the President, people remember who it was that repeatedly demanded transparency.

@lawhawk @evanmcmurry Dems are doing things by the book while the GOP are complaining & hiding behind the brushes.
— Pam (@Pam) 1573230030.0

But some people figured out the Republican game plan—demand outrageous things you will never get then cry foul.

Unfortunately for the GOP, it appears the DNC also figured them out.

@ThePubliusUSA @evanmcmurry Wait, I though he wanted Public Hearings? Oh, now that they are holding them, he DOESN'T want them. Got It!
— Scott Torquato (@Scott Torquato) 1573237404.0

In his conversation with the press before his departure, Trump added:

"I'm not concerned about anything. The testimony has all been fine. I mean for the most part, I've never even heard of these people."

"There are some very fine people. You have some Never Trumpers. It seems that nobody has any first-hand knowledge."

However, despite having no worries, the White House has consistently instructed personnel not to testify. The lasted to ignore a subpoena is acting White House Chief of Staff and Director of the Office of Management and Budget, Mick Mulvaney.

Trump told reporters he ordered Mulvaney not to testify because he:

"...give credibility to a corrupt witch hunt."