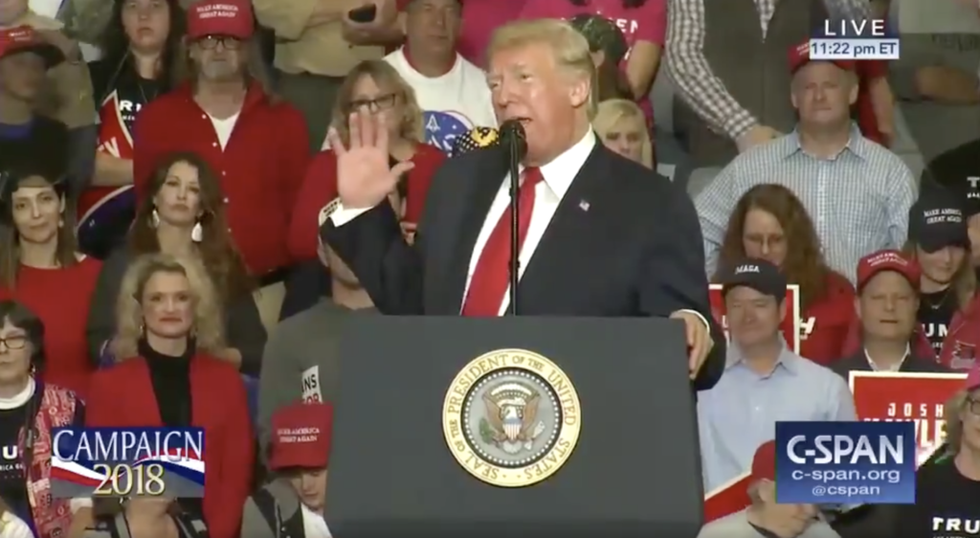 "If the Democrats gain power on Tuesday, one of their very first projects will be a socialist takeover of American health care," the president said. "You know what's happening, and your taxes are going to triple, maybe quadruple. You're not going to be happy, I know you well."

"The Democrat plan would obliterate Obamacare."

He then seemed to catch his own cognitive dissonance:

"...which is good, but leave the bad parts behind."

Many pointed out that the president––and the Republican Party––tried to repeal Obamacare.

Is it surreal to see Trump now defend Obamacare? To see his simple minded supporters lap it up? Or just scary to th… https://t.co/ouiI06RNqm
— Father Bradford (@Father Bradford) 1541517878.0

The history of the Republican opposition to the Affordable Care Act is long and storied, so we'll weigh in on just a few key moments starting from before the president took office.

Republican leaders had planned to gut the Affordable Care Act even before Trump took office. In fact, Mike Pence, then the Vice President-elect, during a private meeting in January 2017, said that Trump planned to take action against Obamacare on his first day in office. Specifically, Trump planned to use executive orders aimed at protecting the insurance marketplace from the blowback of an aggressive repeal. Republicans had vowed to repeal the ACA as soon as possible, with the understanding that pushing a bill through the Senate could take weeks, if not longer.

In the spring of 2017, American hospitals and the AARP announced their opposition to the GOP repeal and replace bill for Obamacare.

The American Hospital Association (AHA) announced it would oppose the American Health Care Act. In doing so, AHA became the first health industry group to voice its opposition to the legislation.

In a letter to House Republicans, Richard Pollack, AHA’s president and CEO, asked Congress “to protect our patients, and find ways to maintain coverage for as many Americans as possible. We look forward to continuing to work with the Congress and the Administration on [Affordable Care Act] ACA reform, but we cannot support The American Health Care Act in its current form.”

Pollack also came out against a provision of the legislation that would strike funding for states to expand Medicaid beyond 2019. Hospitals, he continued, would be adversely affected by elements of the measure that give relief to other industries largely through eliminating taxes imposed by Obamacare yet offer no help for them. For example, items like the overall tax on healthcare plans have been removed entirely, but a reduction in Medicare payment levels for hospital services remains in place.

“If coverage is not maintained at the current level, those resources need to be returned to hospitals and health systems in order to provide services to what will likely be an increased number of uninsured Americans,” Pollack said.

AARP (formerly the American Association for Retired Persons) cited a provision which would allow insurers to raise premiums for older Americans to rates five times higher than they charge younger workers provided state regulations allow it. Obamacare had successfully capped this ratio, known as the “age rating,” at 3 to 1.

“Older Americans need affordable health care services and prescriptions,” AARP Executive Vice President Nancy LeaMond said in a statement. “This plan goes in the opposite direction, increasing insurance premiums for older Americans and not doing anything to lower drug costs.”

The organization, which has 38 million members age 50 or older, also opposes the measure’s restructuring of Medicaid, which, its members argue, might force states to make cuts that hurt seniors, many of whom rely on Medicaid for nursing home care and other necessary health services. The legislation would also roll back Obamacare’s expansion of the program, which made it available to millions of low-income adults, many of them seniors, who did not have health insurance before.

In July 2017, an analysis of health insurers’ financial data by the nonpartisan Kaiser Family Foundation finds that Obamacare’s individual exchanges have seen increased insurer profits and that the individual market is “stabilizing.” The study also found that insurer financial results do not indicate any “sign of a market collapse.”

An earlier Kaiser Family Foundation analysis of premium and claims data from 2011 – 2016 found that insurer financial performance “indeed worsened in 2014 and 2015 with the opening of the exchange markets,” but showed signs of improvement the following year. For this analysis, researchers looked at

…recently-released first quarter financial data from 2017 to examine whether recent premium increases were sufficient to bring insurer performance back to pre-ACA levels. These new data offer more evidence that the individual market has been stabilizing and insurers are regaining profitability.

We use financial data reported by insurance companies to the National Association of Insurance Commissioners and compiled by Mark Farrah Associates to look at the average premiums, claims, medical loss ratios, gross margins, and enrollee utilization from first quarter 2011 through first quarter 2017 in the individual insurance market.1 These figures include coverage purchased through the ACA’s exchange marketplaces and ACA-compliant plans purchased directly from insurers outside the marketplaces (which are part of the same risk pool), as well as individual plans originally purchased before the ACA went into effect.

Late night television host Jimmy Kimmel proved to be a thorn in the GOP's side because he continued to make the case for the Affordable Care Act, detailing his son’s recent birth and heart surgery and urging Congress not to gut health care access.

In the fall of 2017, he weighed in on the Graham-Cassidy Obamacare replacement bill––named for Senators Lindsey Graham (R-SC) and Bill Cassidy (R-LA)––which at the time barreled through the Senate. The bill would have stripped the ACA’s federal funding, and allowed the states to run individual health care programs. It would have also axed the “individual mandate” that requires people to buy insurance and roll back funding for Medicaid.

“I know you guys are going to find this hard to believe. But a few months ago, after my son had open heart surgery … a senator named Bill Cassidy from Louisiana, was on my show and he wasn’t very honest,” Kimmel said, referring to an appearance Cassidy made on his program, during which he stressed the importance of making health care affordable for the middle class.

The Republican leadership opted not to push the bill to a floor vote the following week.

The president caved to pressure from the right on a bipartisan health care deal in October 2017, which would have provided subsidies and flexibility for states to sidestep some coverage requirements imposed by the health care law. Its future was in doubt after Trump reversed course, caving to the opposition from top congressional Republicans who were already lukewarm about its prospects on the Senate floor.

Senators Lamar Alexander (R-TN) and Patty Murray (D-WA) had earlier announced their agreement after weeks of negotiations and mere days after the president announced he would halt federal subsidies to insurers. “This agreement avoids chaos,” Alexander said when he announced the deal. “I don’t know a Republican or Democrat who benefits from chaos.”

Trump had earlier signaled the deal would be “a very good solution” that would appease insurance markets and give him time to scrap the Affordable Care Act altogether. “Yes, we have been involved, and this is a short-term deal,” Trump said at the time, adding that the proposal would “get us over this intermediate hump.”