Donald Trump Just Completely Made Up the Name of an Immigration Bill in Order to Attack Democrats, and People Are Crying Foul 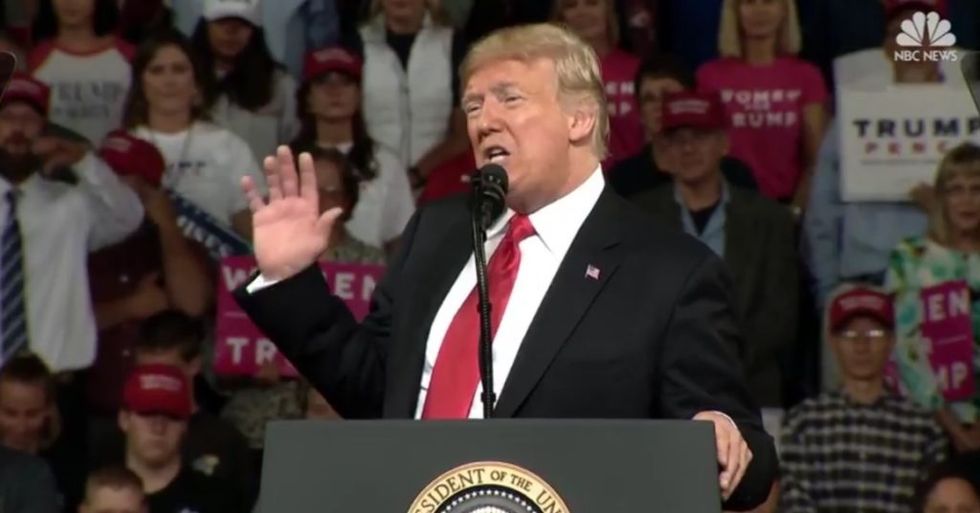 At his rally in Topeka, Kansas, Saturday, President Donald Trump spoke of a bill created by Democratic Senator Dianne Feinstein of California. The bill Trump spoke of is called the Open Borders Bill.

"Every single democrat in the US Senate has signed up for open borders and its a billed called The Open Borders Bill and it's written by, guess who, Dianne Feinstein. Remember the leaking, right? The leaking Dianne Feinstein."

"If the democrat's bill ever becomes law, a tidal wave of drugs and crime will pour into our nation like never ever before."

Trump's supporters echoed his statements online to bolster support for Republican candidates leading up to the November midterms.

"Every single democrat in the US Senate has signed up for open borders and its a billed called The Open Borders Bil… https://t.co/etqhEqBNPS
— Red Nation Rising (@Red Nation Rising) 1538872086.0

"If the democrat's bill ever becomes law, a tidal wave of drugs and crime will pour into our nation like never ever… https://t.co/OC0gzyjNvs
— Red Nation Rising (@Red Nation Rising) 1538872147.0

Trump went on to state:

"Republicans believe our country should be a sanctuary for law-abiding Americans, not criminal aliens. And Republicans stand proudly with the brave men and women of ICE, Border Patrol, and law enforcement."

The section where Trump attacks Democrats regarding the nonexistent bill ends at the 42:07 mark on the video.

There is a problem with the President's characterizations of the bill however, namely, that the bill does not actually exist.

A review of the bills currently in committee in the Senate as well as those officially submitted or up for other review or vote yields no records of an "Open Borders Bill" or one that does the things Trump claims his fictitious Feinstein bill would do.

Both featured stories that included the President's rally claims as well as adding a few extra details from the nonexistent bill's contents. Breitbart even made up another nickname for the fictitious Open Borders Bill.

"Trump called out Sen. Dianne Feinstein’s (D-CA) plan for open borders that every Senate Democrat has announced they support."

"Feinstein’s legislation would abolish and end all immigration and border enforcement across the U.S., allowing the 12 to 30 million illegal aliens living in the country and all future illegal aliens to be free to travel back and forth across the hemisphere without enforcement or protections for Americans."

"The plan would also likely ban any and all federal arrests of illegal aliens. The legislation has earned the nickname, the 'Child Trafficking Encouragement Act,' as it allows illegal alien smugglers to freely traffic children into the U.S. without the fear of arrest."

Aside from people who don't fact check or those who believe in conspiracy theories of shadow governments, people did not buy the lies from right wing extremist media or President Trump.

And they let him know.

So it turns out Trump wasn’t just inventing the Open Borders Bill thing himself. Still a lie; there is no Open Bord… https://t.co/E3BYmtrDtT
— Daniel Dale (@Daniel Dale) 1538916209.0

...others on Twitter called out Trump for the lie as well.

FALSE: @realDonaldTrump's claim that Democrats in the Senate signed up for an "open borders bill." There is no such… https://t.co/iyQnio3gQK
— PolitiFact (@PolitiFact) 1539013665.0

Perfect example of Trump’s lies: During a speech he claimed Democrats proposed something called the “Open Borders B… https://t.co/TthZvvT6sA
— Allen Clifton (@Allen Clifton) 1539009282.0

ICYMI: Trump at a Saturday rally said Democrats sponsored an Open Borders Bill. There is no such bill. It was a total lie.
— mike freeman (@mike freeman) 1539002946.0

However the President's supporters are repeating misinformation from Trump's speech online as a rallying cry to get people to vote for Republicans in the upcoming 2018 midterm elections. Which was the point of the lie about a nonexistent Democrat sponsored Open Borders Bill.