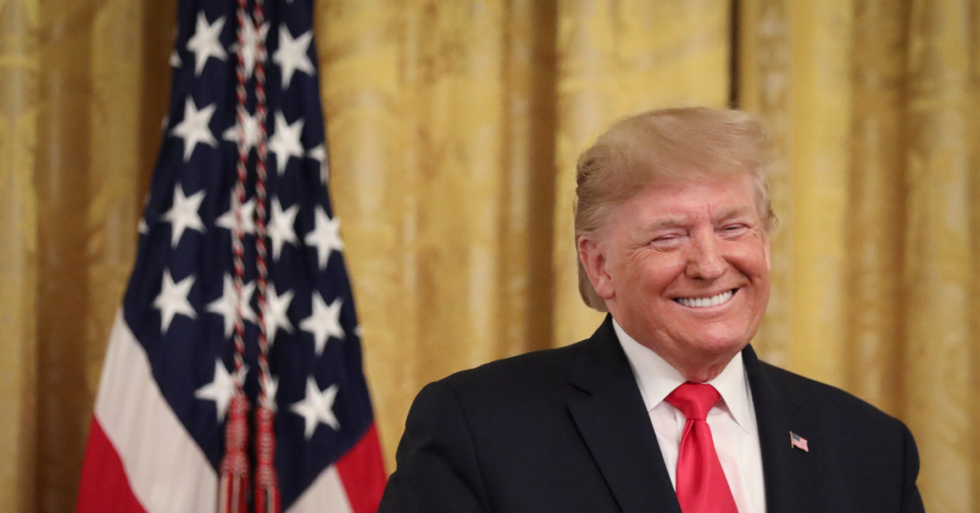 President Donald Trump looks on during an event in the East Room of the White House on November 6, 2019 in Washington, DC. (Photo by Drew Angerer/Getty Images)

For centuries, education in the United States focused almost solely on the history of White male European explorers and settlers. Finally, in 1976 as part of the country's bicentennial, President Gerald Ford declared February Black History Month—an event already recognized by numerous states by then.

In the following decades, months were designated to nationally observe the contributions and history of other groups long underrepresented in school curriculums such as women, Hispanics, Asian and Pacific Islanders, Arabs, Jews and LGBTQ people.

Trump just trashed Native American Heritage Month and established this, seemingly based off a resolution that has b… https://t.co/ylKB0RZtV3
— Jamil Smith (@Jamil Smith) 1572958670.0

Largely in response to members of his base decrying the lack of a White history month, Trump also proclaimed November 2019 would include the new designation. The stated purpose is to celebrate the "first European founders and colonizers of America."

The fact this group was largely responsible for the genocide of Native Americans was not lost on Native leaders, activists and scholars.

"By centering this founders' narrative and calling it American history, it completely erases Native people. It's an uncomfortable truth that the first people in this country were here before the founding of the [United States]."

Nor was the fact that while the new American History and Founders Month received prominent recognition on the official White House website, the Native American Heritage proclamation was initially not posted to the website until after public backlash. And the majority of that proclamation touts the accomplishments of the Trump administration, not Native Americans.

The only specific example of Native contribution to the USA mentioned in Trump's 2019 proclamation is even devalued. The President states "American Indians and Alaska Natives have [volunteered for military service] at one of the highest rates of any ethnic group...". But Indigenous peoples of the United States have joined the military at the highest rate of any ethnic group for decades, during wartime and peace.

This is not a statistic they share as just "one of" the unnamed others Trump alludes to.

"The [Founders] proclamation is a clear rejection of what Native American Heritage Month stands for: that we, as Indigenous people, survived these so-called Founding Fathers who weren't founders at all. They were invaders. They massacred, they murdered, they demonized."

"It subverts and insults the purpose of this month by saying, 'We're also going to celebrate the White people that hated the Indians.' Even if he does make the [Native Heritage] proclamation, people can see that in and of itself is lip service."

Let me clarify: Trump subverts and undermines the sole purpose of #NativeAmericanHeritageMonth by instead celebrati… https://t.co/SFGWdyJlY9
— Simon Moya-Smith (@Simon Moya-Smith) 1572915257.0

While some called the new observation an "All Lives Matter Makeover," others called the creation of National American History and Founders Month a deliberate slight by the Trump administration against Natives. The President has a contentious and adversarial relationship with Indigenous peoples dating to his time as a casino owner.

In the 1990s, Trump paid more than $1 million for ads portraying members of a tribe in upstate New York as cocaine traffickers and career criminals to block their bid for an Indian gaming license. The then casino owner also testified before Congress that the Natives of New York and Connecticut didn't "look like Indians" to him in opposition to their being granted a license.

Checked in with George Washington via ouija board last night and here are his thoughts on the President’s newly dec… https://t.co/2SyHrUCyif
— Seth Cotlar (@Seth Cotlar) 1572967242.0

Native leaders like Democratic Representative Deb Haaland (Laguna Pueblo) and allies are not letting Native history be buried under an observation of the Eurocentric history every school child already learns.

This month is set aside to celebrate Native American contributions to this country, but we must also recognize the… https://t.co/1OgrM5YXJx
— Rep. Deb Haaland (@Rep. Deb Haaland) 1572647900.0

Recognizing #NativeAmericanHeritageMonth must go beyond a simple tweet. We must center Native and Indigenous voices… https://t.co/MhLc2lAq0Z
— Ilhan Omar (@Ilhan Omar) 1572645632.0

This November, the #FBI celebrates National #NativeAmericanHeritageMonth and recognizes the diversity within our ra… https://t.co/fICLiaYtNU
— FBI (@FBI) 1572602476.0

Trump has declared November "National American History and Founders Month." For my entire lifetime, it has been… https://t.co/oWs5Vik0q7
— Courtney H (@Courtney H) 1572974683.0

We must remember the tragic reality of the past and the foundation that this country was founded upon - stolen land… https://t.co/27Qh9TodYV
— Rep. Deb Haaland (@Rep. Deb Haaland) 1572902404.0

On October 13 2019, President Trump also issued a formal proclamation recognizing Columbus Day, but not Indigenous People's Day. A growing number of states and municipalities have ended celebrations of Christopher Columbus citing the well documented history of his genocide of 7-10 million Natives, brutal tortures, sex trafficking, rape and slavery during his years in the Caribbean.

Trump stated at the time that the October observance would "always be Columbus Day."

The documentary series We Shall Remain: America Through Native Eyes is available here.