Oops, he said too much. 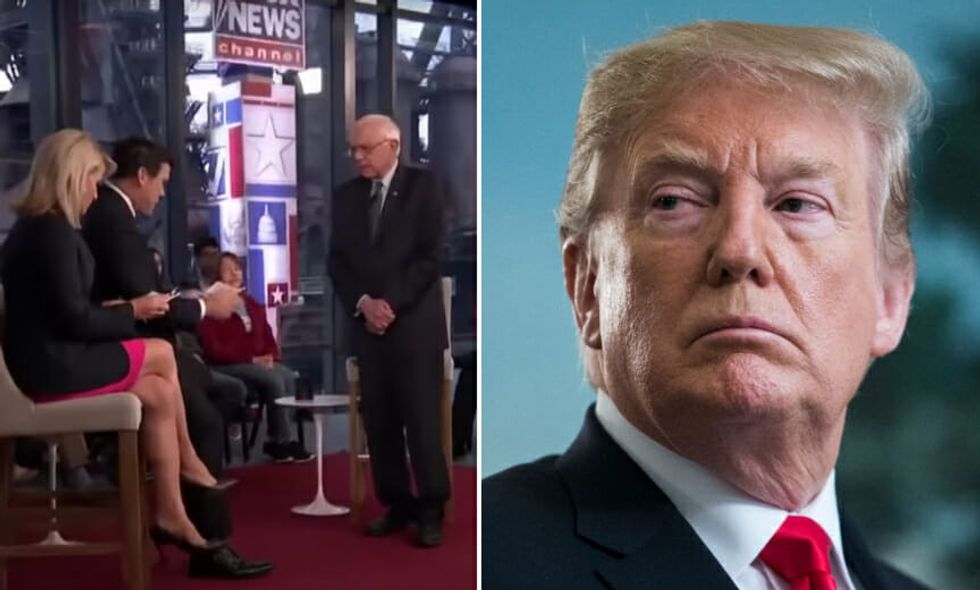 Earlier today, President Donald Trump referred to Senator Bernie Sanders (I-VT) as "Crazy Bernie" in a tweet following a Fox News town hall in Bethlehem, Pennsylvania, during which Sanders drummed up support for Medicare for All.

But it was the use of the word "we" indicating a symbiotic relationship between the president and his preferred network—one that has often been accused of ignoring crucial news items while currying favor with the president—that riled Trump's critics.

@realDonaldTrump @FoxNews @BretBaier @donnabrazile Did you just say "now we have"? We all know Fox is basically st… https://t.co/UHyQehyeul
— Cathleen Burke (@Cathleen Burke) 1555438844.0

Trump’s adulation for Fox News is common knowledge at this point, but even his preferred network isn’t immune from his rages and peculiarities. The president, according to a New Yorker report published last month, ranks Fox News hosts based on their loyalty to him. Trump uses a scale of 1 to 10.

The report confirms so many of Trump's critics' worst fears: That there appears to be no end to the depths of the notoriously thin-skinned president’s narcissism, to which the American public so often has a front row seat.

Surprisingly, it wasn’t Trump acolyte Sean Hannity who received the highest score. Although the president gave Hannity a perfect score of 10, he believes Steve Doocy, the co-host of “Fox & Friends,” is so devoted to him that Doocy’s earned a score of 12.

Doocy doesn’t rank anywhere near as high among Republican consumers, according to a November 2018 Morning Consult poll that ranked the favorability of Fox News hosts. Doocy’s near the bottom; Tucker Carlson, Laura Ingraham, and Ainsley Earhardt have the top three spots. Hannity just misses the top five. And although Trump isn’t as enamored with Brett Baier, the moderator for Sanders' town hall whom he rated a 6 out 10, Baier is still among the top 10 Fox News hosts according to this survey.

Baier––and by extension, the entire Fox News network––undoubtedly took a hit when during the town hall, Baier asked if they’d be “willing to transition to a government-run system,” signaling support for Medicare for All.

“I want to ask the audience a question, if you could raise your hand here,” Baier said. “A show of hands of how many people get their insurance from work, private insurance right now.”

Most audience members raised their hands.

“Now of those, how many are willing to transition to what the senator says, a government-run system?” Baier asked.

The same amount of people raised their hands. Many cheered loudly, much to Baier’s surprise.

Bret Baier just polled the Bernie Town Hall audience who would be willing to switch to #MedicareForAll. It backfire… https://t.co/A8bNPM12hR
— jordan (@jordan) 1555369027.0

“There’s 180 million people on private insurance, and they would be lost, right?” Baier continued.

To that, Sanders replied:

“Fair question. I know it’s what the right wing throws out, so let me answer it, all right? Millions of people every single year lose their health insurance, you know why? They get fired or they quit and they go to another employer. I was a mayor for eight years and you know what I did, what probably every mayor in America does, is you look around for the best insurance program, the most cost-effective insurance. You change insurance. Every year, millions of workers wake up in the morning and their employer has changed the insurance that they have. Maybe they liked the doctors, some people are nodding their heads, OK. So this is not new, every year. Now what we’re talking about actually is stability. That when you have a ‘Medicare for All’ it is there now and will be there in the future.”

Raise your hand if you're sick and tired of your private health insurance company. We need Medicare for All.… https://t.co/FmWgRKTpqQ
— Bernie Sanders (@Bernie Sanders) 1555369488.0

Baier and other Fox News personalities have denounced Medicare for All proposals as a “socialist” attempt to usurp a capitalist structure and abolish all private insurance. But several polls, including one conducted by The Hill in October 2018, show that the majority of Americans support Medicare for All. A similar poll conducted in January 2019 showed that 56 percent of American voters support such a system. And the footage from the town hall only accentuates what many already know: That the United States is ready for a change.