Donald Trump's Campaign Asked People to Choose a Logo for His New 'Space Force', but the Internet Provided Designs of Their Own

The sew on patches are the best. 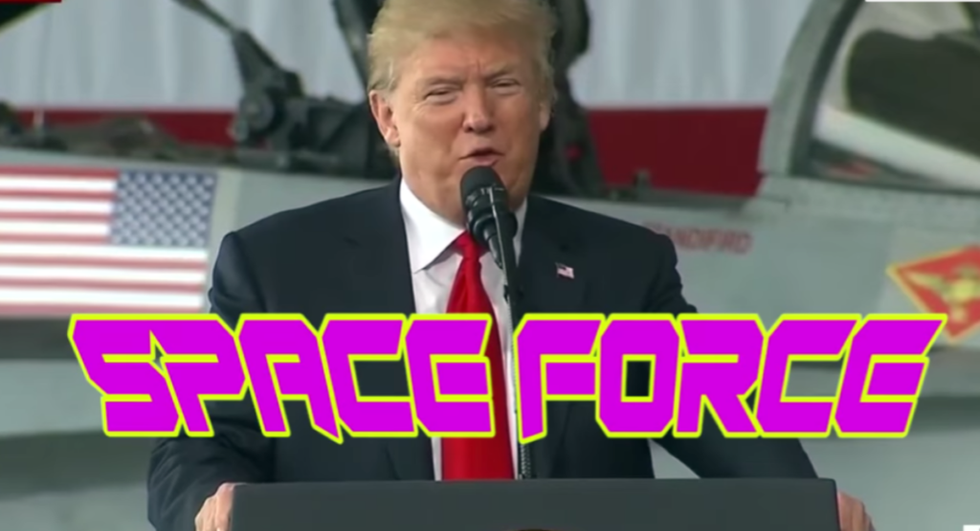 On June 18, 2018, President Donald Trump announced his intention of creating another branch of the military that he dubbed Space Force.

During a meeting of the National Space Council, the President stated:

"When it comes to defending America, it is not enough to merely have an American presence in space. We must have American dominance in space. So important. Very importantly, I’m hereby directing the Department of Defense and Pentagon to immediately begin the process necessary to establish a space force as the sixth branch of the armed forces. That’s a big statement."

During a speech at the Pentagon on August 9, Vice President Mike Pence—the Chairman of the National Space Council— expanded on the plans to establish this Space Force.

The Department of Defense also issued an official statement. And shortly thereafter the Trump campaign sent an email to their Trump Pence Make America Great Again Committee donors asking them to vote on logo designs for the new military branch.

The message also mentions upcoming sales of a "new line of gear."

The Trump/Pence PAC is already trying to monetize the Space Force: "As a way to celebrate President Trump’s huge a… https://t.co/AkZtIIBO1K
— eve peyser (@eve peyser) 1533844037.0

But the internet being what it is, came up with some alternate designs of their own.

A few referenced another "force" from a galaxy far, far away.

And some even suggested a first project for the new military branch.

However some people saw a few similarities between the new logos and some existing ones. Like this image and NASA.

While some were less than kind in their suggestions.

Hi @realDonaldTrump I heard you are looking for logos for your new SPACE FORCE! As a professional graphic designer,… https://t.co/RRzzFqoP6C
— Rob Sheridan (@Rob Sheridan) 1533846844.0

While some artists and organizations gave multiple options like in the following suggestions.

VP Pence is announcing a plan for the Space Force today. Did he take one of our suggestions for a logo?… https://t.co/chLbHruYJZ
— Businessweek (@Businessweek) 1533823214.0

Or these contributions from other artists...

They all had at least one thing in common however. They were creative.

But despite these tweets...

...an official logo designation date was not specified in the Trump campaign email. But while you await that announcement, you can enjoy this unofficial theme song for the new military branch.