Donald Trump Just Shattered His Own Record for Most 'False or Misleading Claims' Told in One Month, and We Shouldn't Be Surprised 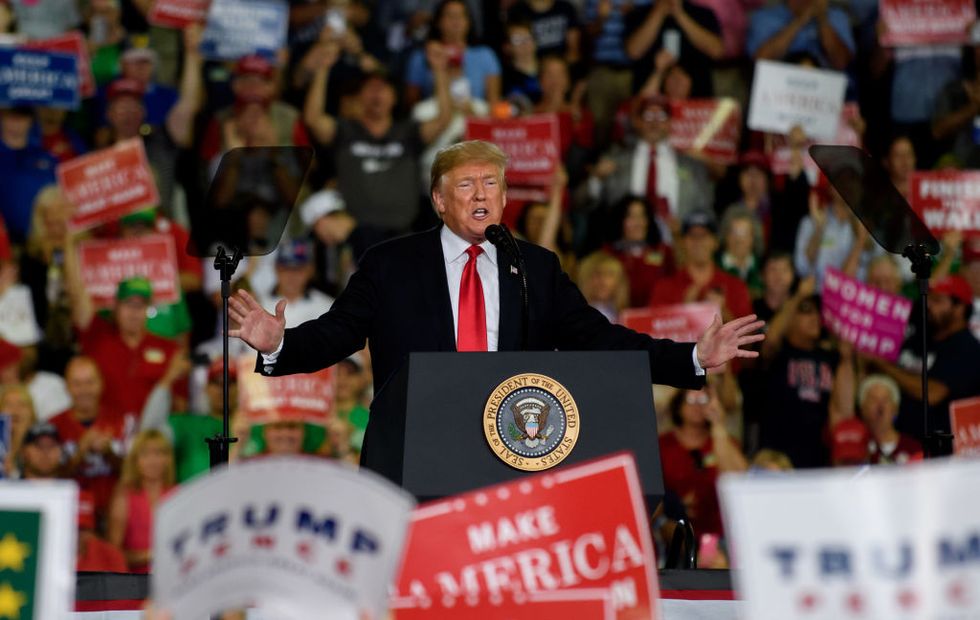 ERIE, PA - OCTOBER 10: U.S. President Donald Trump speaks at a rally at the Erie Insurance Arena on October 10, 2018 in Erie, Pennsylvania. This was the second rally hosted by the president this week, including one in Iowa yesterday. (Photo by Jeff Swensen/Getty Images)

As the nation grapples with tomorrow's midterm elections, multiple individuals, including Tony Schwartz, the CEO and founder of the Energy Project, have condemned the president's lies and rhetoric.

"The magnitude of Trump's lies in the run up to the midterms is astonishing, even by his standards," he wrote.

The magnitude of Trump's lies in the run up to the midterms is astonishing, even by his standards. Nearly everythi… https://t.co/ASTGtPOX6s
— Tony Schwartz (@Tony Schwartz) 1541422331.0

Earlier, Schwartz encouraged all Americans to vote, saying that the United States "cannot survive this hatred unleashed for another two years."

Daniel Dale, a Washington correspondent with The Toronto Star, documented numerous statements Trump made during a recent appearance. Among the lies: Trump claimed that he was on Oprah Winfrey's television show in its last week because she had on "her five most important people." A simple fact check found that Trump was actually on the show a few months before it officially ended in 2011. (Dale notes that Trump has made this claim four times.)

Jennifer Rubin, a conservative blogger at the Washington Post defended the roles journalists play to uphold the Fourth Estate.

"We are obliged to track Trump’s lies, if only to remind Americans of the difference between truth and fiction and to trace the pace of his lies," she wrote.

Whether coverage serves to annoy or satisfy Trump’s gargantuan ego is not journalists’ concern. We are obliged to t… https://t.co/XISGSW6f3d
— Jennifer Rubin (@Jennifer Rubin) 1541355869.0

"It's truly stunning -- and frightening -- stuff. What's more terrifying to me is that Trump's supporters don't seem to know -- or care -- about any of this. They regard fact checks by the media as simply the "fake news" doing everything they can to slow down Trump's momentum," writes CNN's Chris Cillizza, adding:

And to the extent they acknowledge that Trump doesn't tell the truth a lot of the time, they write it off as either a) him just talking or b) that all politicians lie. (Most politicians do say untrue things from time to time. When called on them, however, they stop saying the false things. Trump is not like that.)

Trump also works aggressively to ensure that his base sees him as the only honest man in the country, the only person who is really telling it like it is.

A New York Times report from last week appears to support Cillizza's observations. "Supporters at his [Trump's] rallies across the country tell reporters that they understand he may not be strictly accurate in his roaring stump speeches, but they see him as a champion of their values," the report, which discusses what even a Trump ally referred to as his "reality distortion field," reads.

The president's behavior has also impacted the U.S.'s relationships with foreign countries.

Last month, the Pew Research Center found that “as the second anniversary of Trump’s election approaches, a new 25-nation Pew Research Center survey finds that Trump’s international image remains poor, while ratings for the United States are much lower than during Barack Obama’s presidency.”

Over the summer, The Scotsman, Scotland’s national newspaper, published a particularly scathing editorial denouncing Trump ahead of his visit to the United Kingdom.

"The 45th US President is an appalling human being,” the editorial staff observes, before launching into an exhaustive list of Trump’s transgressions.

Trump, among other things The Scotsman notes:

The Scotsman‘s editorial team also takes Trump to task for his penchant for decrying the media as “fake news,” a mantra which many believe galvanized a gunman who killed several people at the headquarters of Maryland’s Capital Gazette while already embroiled in a lawsuit against the paper. More recently, many have suggested that the president's rhetoric inspired a man to send a string of mail bombs to prominent Democrats and to the headquarters of CNN.