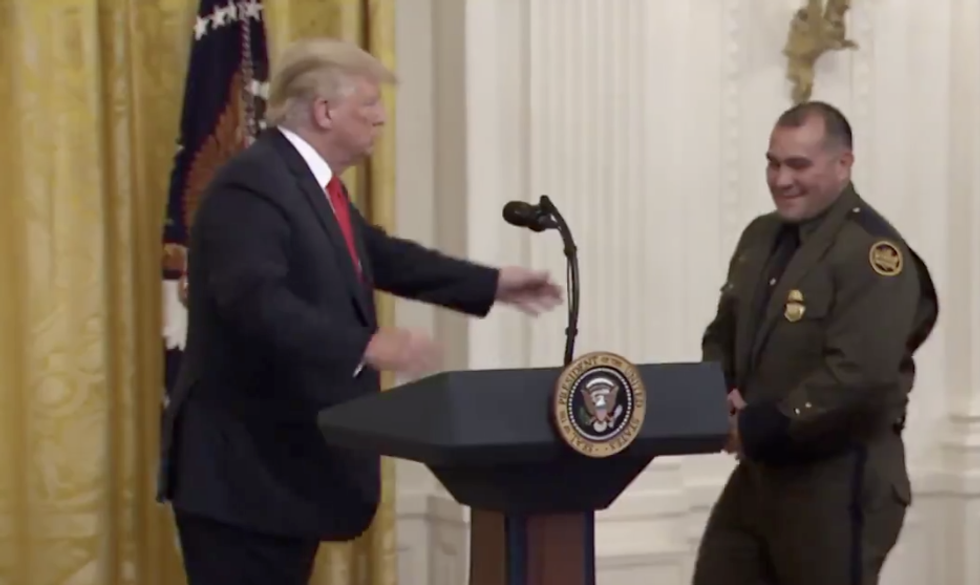 The president singled out a Hispanic American Customs & Border Protection officer for his bravery. As the officer made his way to the stage, the president said:

Come here, you're not nervous are you? Speaks perfect English.

The statement was promptly met with outrage, with many on social media pointing out what the statement implied.

Others pointed out that the president's own English skills seem sub-par, despite his claims to have "the best words."

This is hardly the first time the president has dropped the ball when it comes to interactions with people of color. He caught flack for a now-infamous Cinco de Mayo tweet during the 2016 campaign.

He even began his campaign by insulting undocumented immigrants, saying in a speech:

Nor are his microaggressions limited to Hispanic people. Trump used a Navajo veterans event at the White House last year as an opportunity to take a jab at Senator Elizabeth Warren (D-MA), using the slur "Pocahontas."

However, it wasn't just the president's insensitivity that cast a shadow over today's White House event.

The event honoring border patrol agents comes as 565 undocumented children remain separated from their families due to the Trump administration's policy of trying undocumented immigrants as criminals.

I would cite you to the Apostle Paul and his clear and wise command in Romans 13, to obey the laws of the government because God has ordained them for the purpose of order

The rhetoric from the Trump White House appears to be emboldening Immigration and Customs Enforcement agencies as well as law enforcement outside the realm of border control. In the Trump era, 287(g) programs--which allow local and state law enforcement access to immigration databases--have skyrocketed. Last month, ICE revealed that it had arrested five times more undocumented people in the first seven months of 2018 than in all of 2017.

Many feel that immigration enforcement agents are getting out of control.

As reports of inhumane actions surrounding the agents increase, Trump's words could be seen as a reflection of the policies the administration enforces.