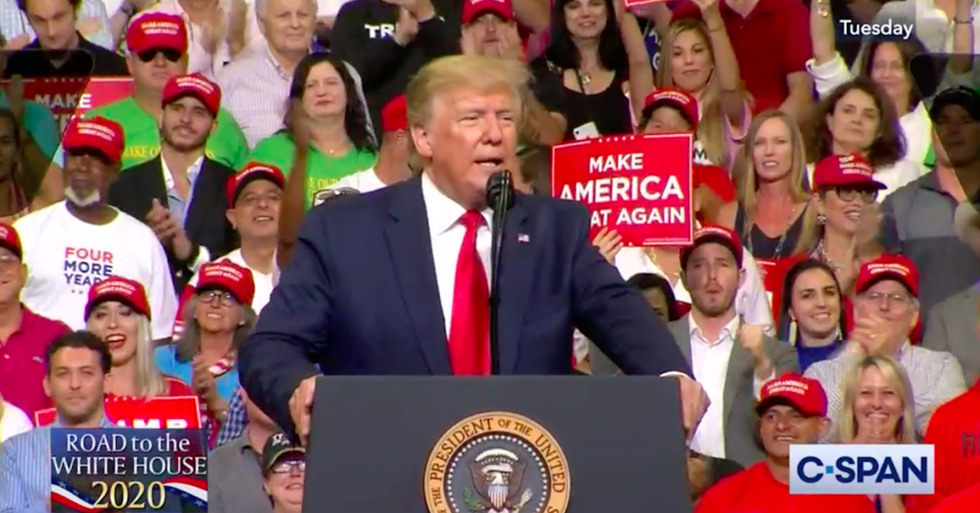 People understood the importance for the former Vice President in light of the death of his eldest son and namesake from brain cancer. The younger Biden had been the 44th Attorney General of Maryland and also served the United States Army as a Major in the Army Judge Advocate General's Corps.

However Donald Trump Jr. found Biden's vow to cure the illness that killed his son something to mock during President Donald Trump's Orlando MAGA rally. Trump Jr. has served in his family's businesses and once co-hosted a reality show with his father.

This is a human fathered by Donald Trump ridiculing a guy whose son died of cancer for saying he'd like the govt… https://t.co/11KTXgA5NB
— John Fugelsang (@John Fugelsang) 1560906023.0

#WednesdayWisdom @DonaldJTrumpJr Regarding your "speech" last night: Just how many family members do you have tha… https://t.co/ottvfgb230
— Juana (@Juana) 1560956518.0

JUST NOW: "Outrageous!" @SenAngusKing at a loss for words over @DonaldJTrumpJr's attacks on @JoeBiden for his reco… https://t.co/WBmLbQgdUe
— John Berman (@John Berman) 1560946562.0

Who does @DonaldJTrumpJr think he is? Mocking Biden in this way is the height of arrogance, ignorance, and insensi… https://t.co/EqoEX8dgGw
— Don Adams (@Don Adams) 1560930365.0

But his father, Donald Trump Sr., saw it as an opportunity to make his own claims about what illnesses he would cure if reelected.

As part of his MAGA rally speech, President Trump said:

"We will push onward with new medical frontiers."

"We will come up with the cures to many, many problems, to many, many diseases, including cancer and others and we’re getting closer all the time."

"We will eradicate AIDS in America once and for all and we’re very close."

@realDonaldTrump Massive cuts to science and medicine in Trump budget This includes $1 billion cuts to the Nation… https://t.co/BDJFKqHZrc
— VICTORY (@VICTORY) 1560959801.0

While in FL, Trump accused President Obama of colluding with Russia, insisted steel has come back in a big way even… https://t.co/NfWN6ndGfW
— Adam Parkhomenko (@Adam Parkhomenko) 1560953223.0

Trump just said he will cure cancer. After his son made fun of Biden for saying it. Nothing matters.
— Jonathan Allen (@Jonathan Allen) 1560907783.0

Many took to Twitter and tagged both Donald Jr. and Sr. with a message about both the son's mocking comment and the father's boast.

@realDonaldTrump can't cure the cancer within his own administration let alone actual cancer. Besides, if he contin… https://t.co/jt0lbe4Hdz
— Lisa Garofano (@Lisa Garofano) 1560959687.0

But some people had much smaller ambitions for the President.

President Trump used the Orlando MAGA rally as a chance to officially kick off his 2020 presidential campaign. His announcement came on the heels of conservative leaning paper Orlando Sentinelendorsing "Not Donald Trump" in 2020 with a scathing editorial and Quinnipiac University's latest Florida poll results showing Trump behind all the Democratic frontrunners.