They did not see this coming. 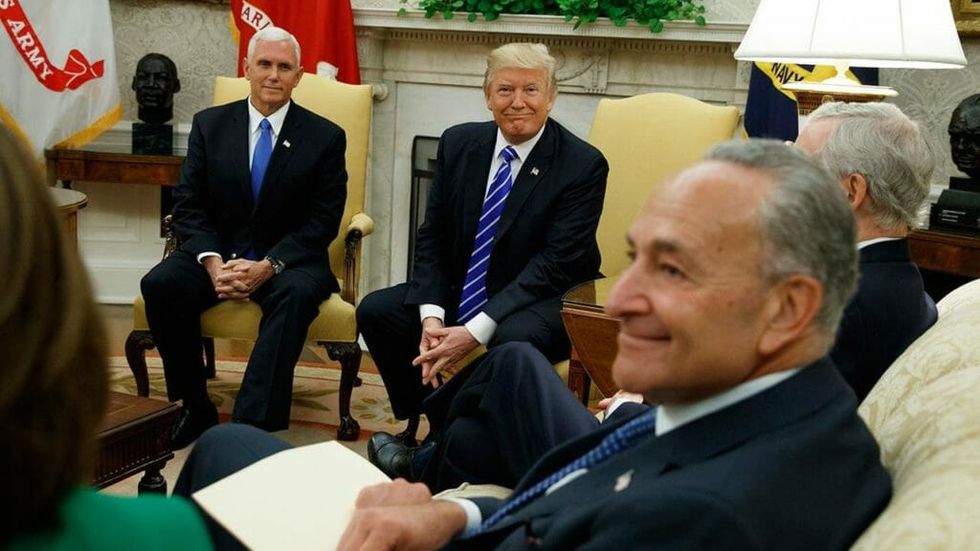 Prominent conservatives expressed their frustrations after President Donald Trump unexpectedly brokered an agreement with Democratic leaders Chuck Schumerand Nancy Pelosi that would avert a fall government shutdown. The deal would fund the government and lift the debt ceiling through mid-December as part of a relief package for Hurricane Harvey victims.

Senator Schumer (D-NY) had earlier announced the news in a tweet.

The nation can breathe a sigh of relief. We've agreed to help those recovering from Hurricane Harvey, avoid default, & avoid a shutdown.
— Chuck Schumer (@Chuck Schumer) 1504727671.0

But Republicans who had urged the president to hold out for a different deal fumed that Democrats now hold the bargaining chips––and that they'll be able to control the debate over taxes, spending, and immigration when the debt ceiling must be raised again at the end of the year.

“It’s just a betrayal of everything we’ve been talking about for years as Republicans,” said former Sen. Jim DeMint (R-S.C.). “What the president’s going to find is … if they bet on Democratic votes they better plan on [giving up] a lot more than they think they’re going to.”

A House Republican lawmaker allied with Ryan who spoke to reporters on condition of anonymity said the deal does not "help our leadership to try to hold us Republicans together on anything when they know the president will chop them off at the knees. “Trump has got to start caring more about his colleagues over here.”

Reports indicate that House Republicans are preparing to launch an offensive with the Republican leadership and that they have a new ally on their side: former top White House adviser Stephen Bannon, who was ousted as the president's top strategist and soon after returned to his former position as chairman of his far-right publication Breitbart.

Representative Mark Meadows (R-N.C.), the chairman of the conservative Freedom Caucus, reportedly dined with Bannon to discuss how to push the Republican legislative agenda through the remainder of the fall.

Meadows himself appeared to provide an early indication of their strategy during a statement to reporters. Instead of faulting Trump for backing the Democrats, he set his sights on Speaker Ryan and Senate Majority Leader Mitch McConnell.

There were no conservative solutions offered to the president in relationship to addressing the debt ceiling," Meadows said, claiming that Trump made a decision between "no deal and a bad deal." He added: "Increasing the limit on a credit card without making any reforms is not a conservative solution."

Breitbart also took the opportunity to lambast Trump for cutting the deal with Pelosi and Schumer. A banner at the top of its homepage declared “MEET THE SWAMP”  yesterday afternoon.