An early morning tweet storm had many questioning our commitment to the recovery. 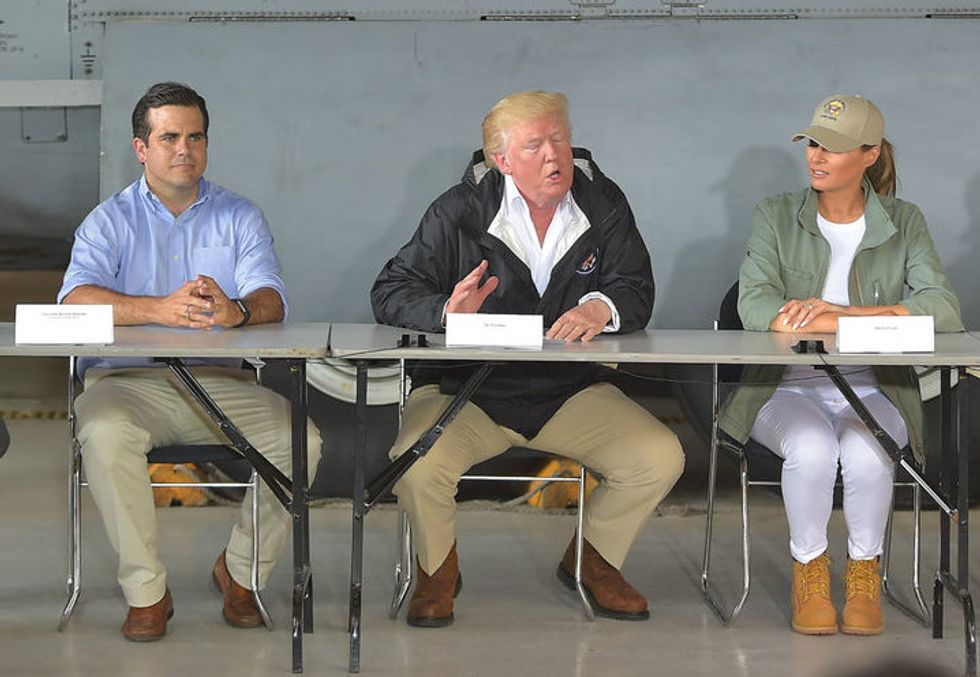 US President Donald Trump and First Lady Melania Trump attend a meeting with Governor Ricardo Rossello (L)and other officials after stepping off Air Force One upon arrival at Luis Mu√±iz Air National Guard Base in Carolina, Puerto Rico on October 3, 2017. Nearly two weeks after Hurricane Maria thrashed through the US territory, much of the islands remains short of food and without access to power or drinking water. / AFP PHOTO / MANDEL NGAN (Photo credit should read MANDEL NGAN/AFP/Getty Images)

In a series of Tweets Thursday, President Donald Trump again blamed Puerto Rican infrastructure prior to two hurricanes that hit last month for their current state. He then threatened to pull FEMA, the military, and first responders from the still devastated island.

As Puerto Rico is a United States territory, their poor infrastructure at any time would reflect poorly on their federal government and it's leader. However pointing out this failure of government doesn't appear to bother President Trump.

His comments came in a series of three Tweets around 4:00am on Thursday morning. They ended with a threat to pull aid workers.

They drew immediate backlash from many sources.

"To kick fellow citizens when they are down is shameful." Rep. Nydia Velazquez ripped Trump for shaming Puerto Ri… https://t.co/urvunTNDCG
— Splinter (@Splinter) 1507896902.0

Trump might be unaware that Puerto Rico is part of the US, but Congress must move as quickly as possible to pass a disaster relief package.
— Bernie Sanders (@Bernie Sanders) 1507850634.0

The wonderful people of Puerto Rico, with their unmatched spirit, know how bad things were before the H's. I will always be with them!
— Donald J. Trump (@Donald J. Trump) 1507896062.0

Whether his recent Tweet means he doesn't plan to pull aid workers remains to be seen. But it's clear that his policy is shaped largely by reactions on Twitter.