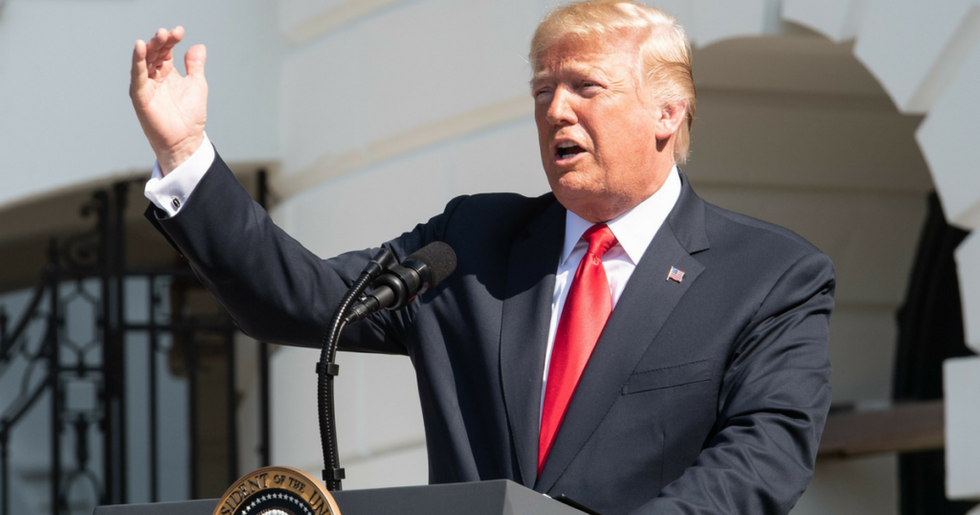 US President Donald Trump speaks about the economy on the South Lawn of the White House on July 27, 2018, in Washington, DC. - The US economy roared to life in the second quarter, posting the fastest annual growth rate in almost four years and the strongest among industrialized nations, according to government data released Friday. (Photo by NICHOLAS KAMM / AFP) (Photo credit should read NICHOLAS KAMM/AFP/Getty Images)

President Donald Trump loves to claim that the United States is experiencing "the best economy & jobs EVER," but a closer look at the data reveals that the president's hyperbole doesn't match the data.

Fewer jobs have been created each month since Trump took office than were added under President Barack Obama, on average.

MSNBC economic analyst Steven Rattner presented the data from the Bureau of Labor Statistics. "Obama finished out his last 18 months with stronger employment gains than Trump has over his first 18 months," Rattner tweeted on Monday. Obama's final 18 months saw an average of 206,000 jobs added per month.

The unemployment rate, which is hovering around 3.8 percent, is also not historically low. In the 1950's, it dipped below three percent. The 1950's was an era of heavy investment in infrastructure and progressive taxation.

People on social media appreciate charts because data is important.

@SteveRattner @Morning_Joe Your charts are so helpful! I save episodes of Morning Joe so that I can share your char… https://t.co/oQsDEoTAEE
— M Kathryn Reynolds (@M Kathryn Reynolds) 1532948133.0

There have been 3.7 million jobs added since November 2016, however, overall growth has slowed since Trump took office.

Last Friday, the Commerce Department released its quarterly report on American economic output, which showed GDP at 4.1 percent. Trump was quick to declare this as "amazing" and "an economic turnaround of historic proportions."

What the president is omitting, however, is that he inherited an economy that had already been on the upswing long before he took office.

"The data show that the falling unemployment rate and gains in home values reflect the duration of the recovery," according to CBS's analysis, "rather than any major changes made since 2017 by the Trump administration."

Additionally, annual GDP growth slumped in 2017 and is expected to drop to 2.6 percent in the third quarter of 2018. Trump has set a goal of three percent growth per year, but we're not there yet, and his "best ever" mantra doesn't hold up to the periods of five percent growth the United States saw in the 1950's and 1960's.

Economists expect GDP growth to top three percent in 2018 and it if it does, that would make 2018 the strongest year since 2005, when annual GDP hit 3.5 percent.

More jobs and a steady GDP are not translating into bigger paychecks for American workers. Wage growth is steady, around 2.6-2.8 percent, however, that barely makes up for inflation. Compare that to the four percent increases we saw during the 1990's. "There’s optimism that Americans will finally get wage growth over 3 percent later this year," the Washington Post wrote in June.