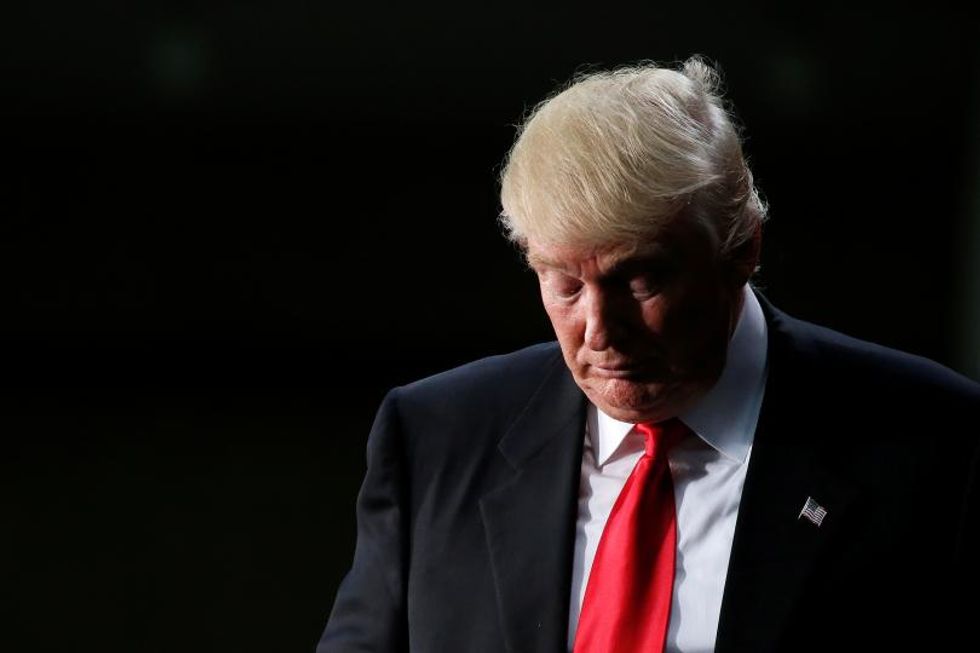 Donald Trump issued an unprecedented apology for his campaign’s past rhetoric while speaking to a crowd in Charlotte, North Carolina, yesterday. “Sometimes, in the heat of debate and speaking on a multitude of issues, you don’t choose the right words or you say the wrong thing," Trump said. "I have done that, and I regret it, particularly where it may have caused personal pain. Too much is at stake for us to be consumed with these issues." The apology comes as the Republican presidential candidate attempts to rebound after several weeks of negative press coverage and recent polls indicating he trails behind Hillary Clinton, his Democratic competitor, in every key battleground state.

Trump’s brash style and incendiary politics became the selling point of his campaign. Despite a history of questionable claims and combative behavior, he assured his audience that he would be truthful. “I’ve traveled all across this country laying out my bold and modern agenda for change. In this journey, I will never lie to you. I will never tell you something I do not believe. I will never put anyone’s interests ahead of yours," he said. Trump then took the opportunity to attempt to contrast his character with Hillary Clinton’s. “So while sometimes I can be too honest,” he said, “Hillary Clinton is the exact opposite: she never tells the truth. One lie after another, and getting worse each passing day.”

The Clinton campaign responded quickly, suggesting that Trump has “literally started his campaign by insulting people.” The campaign did not mince words in its statement: “We learned tonight that his speechwriter and teleprompter knows he has much for which he should apologize. But that apology tonight is simply a well-written phrase until he tells us which of his many offensive, bullying and divisive comments he regrets — and changes his tune altogether.”

Trump’s comments are a significant departure from his off-the-cuff style. Recently, his advisors have made attempts to rehabilitate his image through a pair of scripted policy speeches on the economy and terrorism. Earlier this week, his campaign underwent a major

staff shakeup. Trump named Stephen Bannon, the executive chairman of conservative website Breitbart News, as his campaign’s chief executive. He also promoted Kellyanne Conway, a senior adviser and pollster for his campaign, to campaign manager. Sources close to the campaign said a shakeup was imminent amid allegations that Paul Manafort, Trump’s campaign chairman and chief strategist, pocketed $12.7 million in cash payments from Ukraine’s former ruling party while working as an international consultant between 2007 and 2012 and helped divert foreign funds to influence U.S. policy.

In an interview with CBS, Conway said the campaign will bring an “uplifting, optimistic, policy-centric message” to the American people and that a focus on “the issues” would move Trump past his many controversies. The new approach is a stark contrast from a freewheeling style that has previously left Trump’s advisors scrambling to address Trump’s reactions to news coverage. In a separate statement to CNN, Conway said the campaign will work to broaden its appeal to women and independent voters. "The way to speak to women and all Americans is through issues. We've got to get away from this content-free campaign and on to the substance," she said.

Trump has also struggled to motivate African-American voters, and, in another indication of his commitment to his campaign’s sharper message, he used his speech to make a direct appeal to the community. “If African-Americans give Donald Trump a chance by giving me their vote, the result for them will be amazing,” he said. “Hillary Clinton and the Democratic Party have taken African-American votes totally for granted," he continued. "Because the votes have been automatically there for them, there has been no reason for Democrats to produce and they haven't. They haven't produced in decades and decades.”