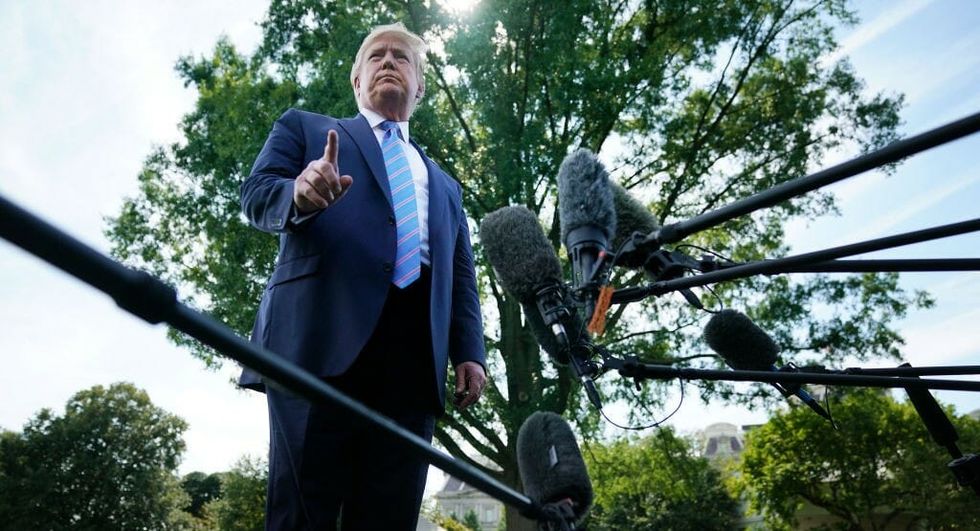 President Donald Trump talks to journalists before boarding Marine One and departing the White House August 02, 2019 in Washington, DC. Trump is traveling to Bedminster, New Jersey, to spend the weekend at his Trump National Golf Club. (Photo by Chip Somodevilla/Getty Images)

On Friday, President Donald Trump announced on Twitter that his first choice for Director of National Intelligence, Republican Representative John Ratcliffe of Texas, decided to remain in Congress.

....John has therefore decided to stay in Congress where he has done such an outstanding job representing the peopl… https://t.co/fZHW0eo1Zr
— Donald J. Trump (@Donald J. Trump) 1564769194.0

@UnfollowTrump 'I wanted a bootlicker but he was too much of a dumpster fire even for me so I unfriended him via Tw… https://t.co/RNpXUMgD0w
— Tardis_lass (@Tardis_lass) 1564772363.0

Ratcliffe had been dubbed the least qualified for National Intelligence in history. Among Ratcliffe's easily found faults were lies on his resume and in his various claims.

The Ratcliffe stuff is really something. Haven't seen a Trump pick for a big job fall apart so quickly since at lea… https://t.co/CArTJjEJaG
— Matthew Miller (@Matthew Miller) 1564753489.0

Because of the ease with which the press found Ratcliffe's lies, many questioned the White House vetting process of their nominees.

Hey @realDonaldTrump: Can you please do some due diligence before impulsively putting someone up for nomination (eg… https://t.co/kpwucPVWA3
— Ted Lieu (@Ted Lieu) 1564769789.0

@realDonaldTrump Yeah, maybe you should have done some vetting first and figured out much of his resume was exagger… https://t.co/EQw7pSS3Hg
— Pé Resists (@Pé Resists) 1564769641.0

How much would you bet that Ratcliffe wasn't vetted at all before Trump announced the pick? https://t.co/yfKthkK7wk
— MoveOn (@MoveOn) 1564600740.0

White House correspondent Yamiche Alcindor asked President Trump about it while he spoke to reporters on his way to his Bedminster golf resort for the weekend.

My Q to Pres Trump: What does this withdrawal by Ratcliffe say about the White House vetting process? This is at l… https://t.co/aOKywRyaiI
— Yamiche Alcindor (@Yamiche Alcindor) 1564775430.0

Pres Trump's full answer to my question which was, what does this withdrawal by Ratcliffe say about the White House… https://t.co/RlG9QcKqIi
— Yamiche Alcindor (@Yamiche Alcindor) 1564777469.0

The President stated he had a sheet of paper in his pocket with his shortlist of new nominees. He declined to produce the piece of paper.

Tired of all the lies? This shirt is available here.