We Now Know How the Trump Administration Is Planning to Pay For Housing Separated Minors, and People Are Not OK 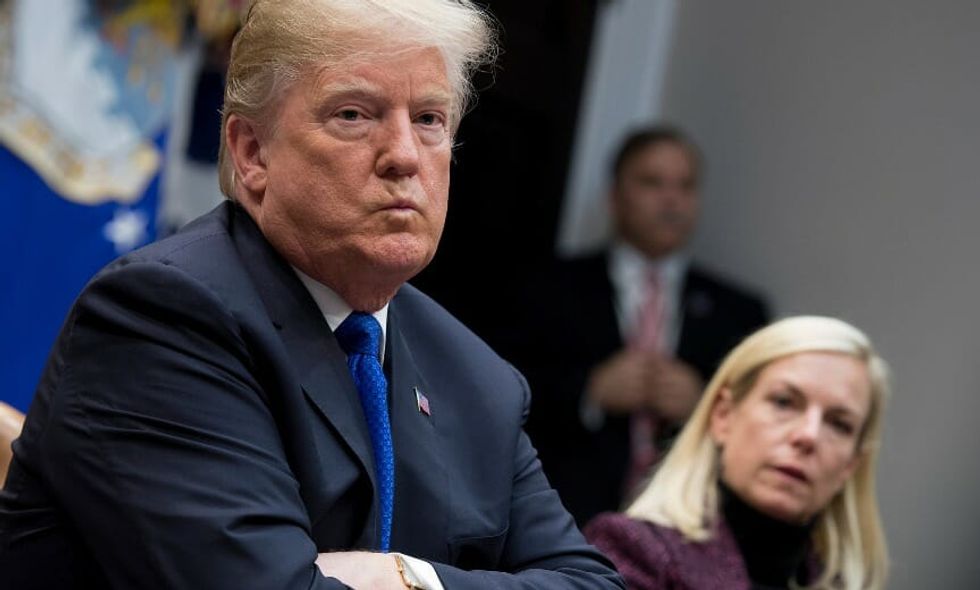 US President Donald Trump (L) listens with US Secretary of Homeland Security Kirstjen Nielsen during a meeting with Republican members of the Senate about immigration at the White House in Washington, DC, on January 4, 2018. / AFP PHOTO / JIM WATSON (Photo credit should read JIM WATSON/AFP/Getty Images)

The Trump administration is planning on cutting hundreds of millions of dollars from cancer and HIV research to cover the costs of keeping immigrant children in custody, Yahoo News reported on Wednesday.

HHS is diverting millions of dollars in funding from a number of programs, including the Centers for Disease Contro… https://t.co/hZEePsPO7T
— Yahoo News (@Yahoo News) 1537399712.0

"Nearly $80 million of that money will come from other refugee support programs" within the Office of Refugee Resettlement, Yahoo said.

Additional funding will be redirected from services ranging from mental health, women's shelters, and substance abuse programs. As of Wednesday, there are currently 13,312 immigrant children in federal custody, according to ORR statistics obtained exclusively by Yahoo. ORR's facilities are at 92 percent capacity, Yahoo said.

CNN on Thursday broke down which essential programs were being slashed to pay for the incarceration of migrant children:

Earlier this month, the Department of Homeland Security shifted $10 million from FEMA to help cover the costs of immigrant detention - days before Hurricane Florence pounded the Carolinas and Virginia.

HHS said in a statement that such requests are routine and the shifting of funds for migrant detention facilities can be traced back to 2012.

"HHS is utilizing the Secretary's transfer and reprogramming authorities to provide additional funds for the care of unaccompanied alien children," said HHS Deputy Secretary Eric Hargan. "The funding will now likewise be used for increases in caseloads and unexpected surges in children needing care from our program. Unfortunately, the need for additional funds has grown since FY 2011, due to the continual increase of unaccompanied alien children at the border. These transfers are only a temporary solution to the sad consequence of a broken immigration system."

Since Congress is controlled by Republicans, the departments should face little resistance in their efforts.

Senator Chris Van Hollen (D-MD) told Yahoo on Wednesday that "we support making sure ORR gets all the resources they need to help kids,” but that he and other key Democrats remained concerned over "a troubling pattern of chaotic, ideologically driven and opaque policymaking."

Van Hollen questioned whether the need for increased funding is arising from an increase in border crossings or because of President Donald Trump's family separation policy. He also requested information on how the programs being cut will be impacted by the shift in budgeting and how the reallocated money will be used.

What are "the reasons for the need for additional money and how much of it is because you have more UACs coming across the border and how much is due to the Trump administration’s family separation policy?" the Maryland Democrat wants to know. He added that "the American public is entitled to the facts behind the policies here."

Van Hollen is not the only one concerned over the potential consequences of siphoning off resources from essential services.

California Lieutenant Governor Gavin Newsom (D) asked the president how he is able to sleep at night by cutting "programs to pay to INCARCERATE CHILDREN."

California Democratic Senate candidate Kevin de Leόn, who is challenging incumbent Diane Feinstein from the left, tweeted to voters that the "choice is yours" on how our tax dollars are spent. Translated: VOTE.

Donald Trump's cruel zero-tolerance policy is not only tearing children from parents, but tearing funding from canc… https://t.co/hEWy1o7hDW
— Menendez for NJ (@Menendez for NJ) 1537454724.0

"These people are monsters."

Twitter is harshly criticizing the move. People are appalled at the lengths to which the administration is going to jail children.

Barbaric imbecility or imbecilic barbarism. You decide. Either way, we are the shithole nation. https://t.co/3DFoSZAI0o via @YahooNews
— David Simon (@David Simon) 1537439246.0

Where are our values as a country, some asked?

HERE'S YOUR MORALLY BANKRUPT GOP: Diverting funds that pay to care for children to cover the cost of kidnapping an… https://t.co/FgJikyBxfr
— Peter Daou (@Peter Daou) 1537444784.0

The latest update from the parade of horrors that is the Trump administration: HHS is reportedly reallocating more… https://t.co/7pjOxsNvGO
— Public Citizen (@Public Citizen) 1537459262.0

Are you OK with this? Trump's HHS diverting funds from NIH, CDC to pay for the increased number of migrant childre… https://t.co/nmgfCyOdVd
— LnF Dog Rescue (@LnF Dog Rescue) 1537452713.0

Where does it end?