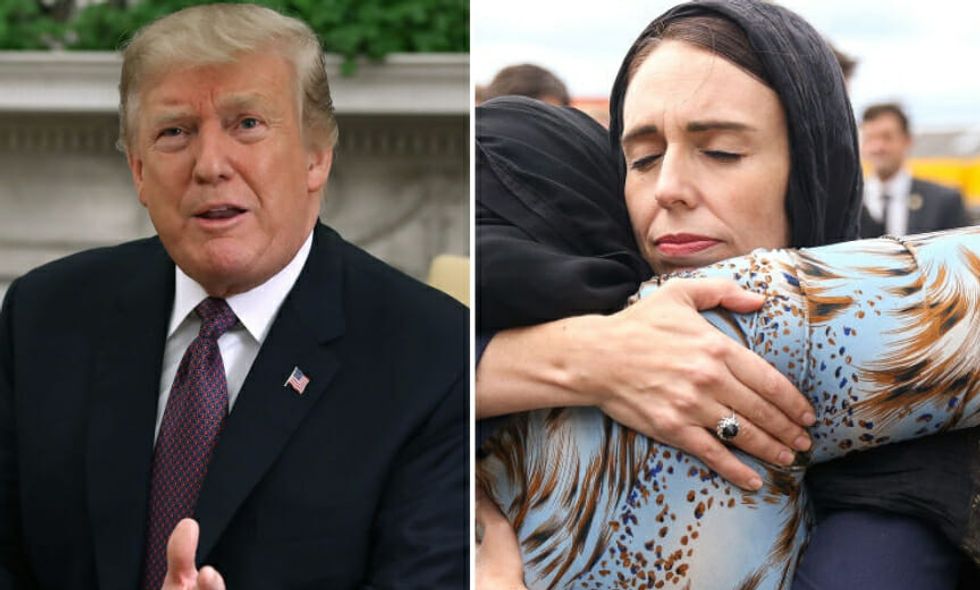 The Trump administration's tacit acceptance of violent rhetoric has reached a new low: they're declining to join New Zealand and France in a commitment to fight online terrorism.

The Christchurch Call for Action, named after the March 15 mass shootings in Christchurch, New Zealand, encourages tech companies to work together to step up their efforts to keep terrorism off social media. The Christchurch massacre was livestreamed on Facebook, and viewed and reposted by millions before Facebook was able to block it.

"When it came to the way this attack was specifically designed to be broadcast and to go viral, (responding) to that needed a global solution, so that was why we immediately got in contact with international counterparts," said New Zealand Prime Minister Jacinda Ardern in an interview with CNN.

Ardern and French President Emmanuel Macron announced the Christchurch Call for Action at a meeting of digital leaders for the G7 nations. The agreement is focused on terrorism and violent extremism on social media. Facebook CEO Mark Zuckerberg has given "Facebook's support to this call to action."

But Trump officials have said the US is "not currently in a position to join the endorsement," citing concerns about freedom of speech.

Trump administration says US will not join the Christchurch Call for Action, a push by New Zealand and France to st… https://t.co/u2ZfmsDtq5
— CNN Breaking News (@CNN Breaking News) 1557939246.0

"We encourage technology companies to enforce their terms of service and community standards that forbid the use of their platforms for terrorist purposes," the official White House statement read, adding "We maintain that the best tool to defeat terrorist speech is productive speech, and thus we emphasize the importance of promoting credible, alternative narratives as the primary means by which we can defeat terrorist messaging."
Productive speech, such as the manifesto of the Christchurch shooter, in which  Trump was cited "as a symbol of renewed white identity and common purpose" and an inspiration for the massacre of 51 people - the impetus for the Christchurch Call for Action.

The Trump administration has derided Facebook and Twitter for cracking down on extremism and misinformation - although many people believe the social media platforms haven't done enough.

@CNNPolitics Of course. As both Twitter and Facebook have realized, there is no way to distinguish between white na… https://t.co/mkfStQWFtZ
— ⚖️ Frank GoBell ⚖️ (@⚖️ Frank GoBell ⚖️) 1557937353.0

This isn't the first time the Trump administration has cited "freedom of speech" to protect violent extremist rhetoric. Trump refused to speak out against Neo-Nazis in Charlottesville, saying there were "very fine people, on both sides."

@cnnbrk The president supports freedom of speech when he -- being the government -- supports the content of that sp… https://t.co/KWXSmGwq35
— Alani Golanski (@Alani Golanski) 1557942764.0

@cnnbrk Of course they won’t. It goes against everything America stands for. They need to keep a safe place for all their white supremacists
— just me (@just me) 1557942916.0

With leaders from countries such as Australia, Canada and the United Kingdom expected to sign on to the call to action, the US looks pretty bad in comparison.