Trump's Acting Attorney General Just Tried to Dodge a Question About Robert Mueller In the Most Brazen Way, and Democrats Weren't Having It 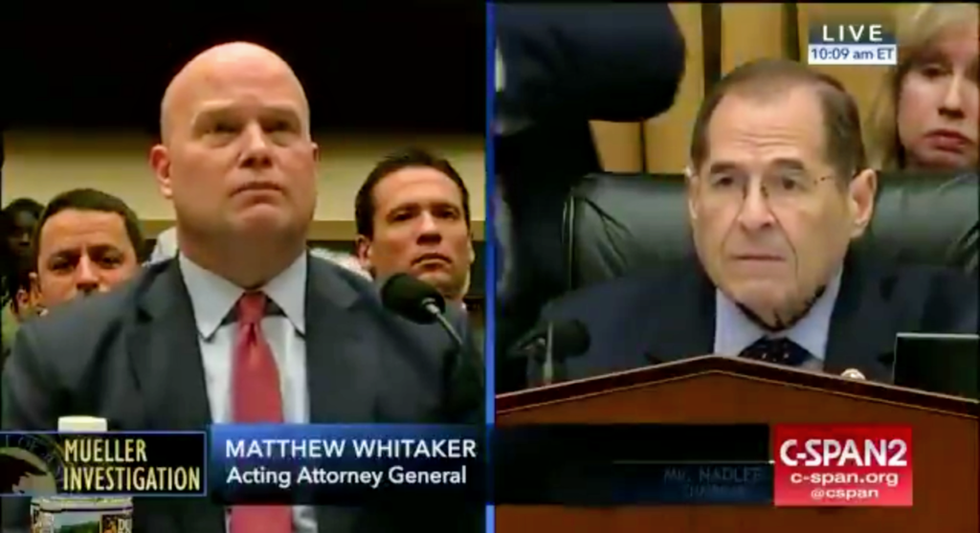 Whitaker was called to answer questions about his involvement in the DoJ ordered investigation into Russian interference in the 2016 presidential election and possible cooperation by members of the Trump campaign. Whitaker's appointment drew immediate questions about his planned involvement in the investigation led by DoJ appointed Special Counsel Robert Mueller based on prior statements Whitaker made.

While the DoJ emphasized Whitaker volunteered to appear at the congressional hearing, the agreement was made under the condition he would not be subpoenaed to testify.

But his testimony was less than cooperative once the hearing began.

One clip, in particular, set Twitter ablaze, when Chairman Jerry Nadler asked Whitaker whether he has "ever been asked to approve any request or action to be taken by the Special Counsel."

"Mr. Chairman, I see that your five minutes is up."

Twitter wasn't the only thing to light up at the acting Attorney General's comment, the hearing room's audible reaction of disbelief was evident as well.

Jerry Nadler asks Matthew Whitaker if he has ever been asked to approve any request or action to be taken by the Sp… https://t.co/luYZY5OT4C
— Kyle Griffin (@Kyle Griffin) 1549639299.0

Representative Nadler was unable to contain his amusement at Whitaker's attempt to avoid answering his question and to control the House Judiciary hearing.

Whitaker also decided to try again with Texas Democratic Representative Sheila Jackson Lee. But Jackson Lee reminded the acting AG of where he was and to whom he was speaking.

In the print copy of Whitaker's opening remarks provided to the press by the DoJ, Whitaker planned to claim "the vast majority of the illegal drugs in this country is coming over our Southern border, a pattern that is true for all crimes." However actual law enforcement statistics, coming from the Department of Justice, do not support Whitaker's claims.

People expected Whitaker to get pushback on his false claims. And he did from Republican Representative Louis Buller Gohmert Jr. of Texas.

People took exception with Whitaker's responses to members of Congress.

And some thought Whitaker's response and uncooperative nature warranted a subpoena from Congress.

"In my view, your conduct, Mr. Whitaker—including your decision to ignore important ethics advice when you became acting Attorney General, no matter the consequences—your conduct, sir, falls well short of the mark."

The congressional hearing is ongoing.